Only God, Secret Service and a handful of GM engineers know what exactly is inside the U.S. President's armoured limousine.

U.S. President Donald Trump has announced his India visit on February 24 and ahead of his visit, his Presidential Limousine, often called 'The Beast' has arrived in India. The new presidential armoured limo was inducted in the Secret Service fleet in 2018 and is a all-new Cadillac based model. The hyped presidential limousine is considered to be the most sophisticated vehicle for transporting the head of the state and was under work for a long time. The new model replaced the previous Beast which was on duty since 2009. The unique vehicle with Cadillac styling has a custom-built medium-duty truck frame design and is only of its kind vehicle in the world. Here’s more facts on the Presidential Cadillac – ‘The Beast 2.0’.

1) There are more than two Beast 2.0 delivered by GM to the Secret Service to provide a backup or decoy. A usual Presidential motorcade can be seen with two of these kind machines.

2) The new Cadillac limo has a grille with common design language as the Cadillac Escala concept car, but that’s the only similarity with the design of any of the vehicles out there. 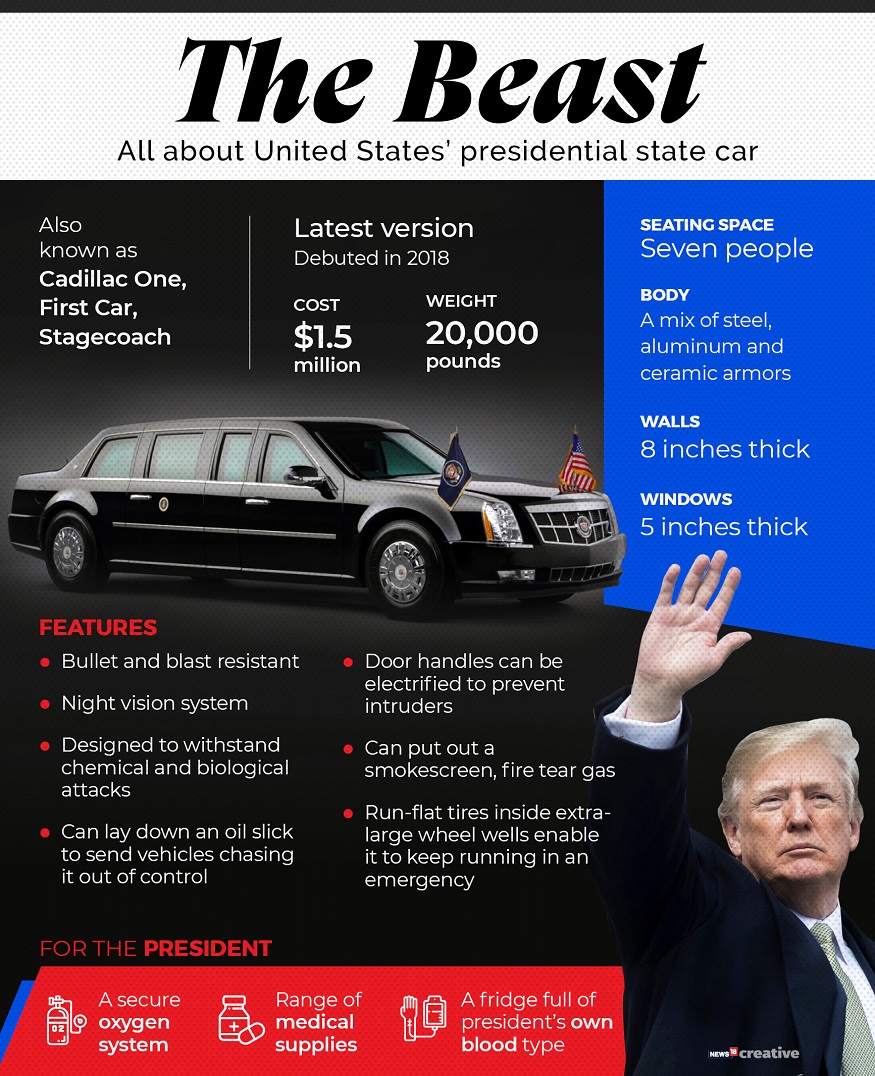 3) The limo has its own airplane - a C-17 Globemaster cargo plane and follows the President everywhere he goes.

4) All the limos are similarly built and are heavily armored, with 5-inch-thick glass, 8-inch-thick doors (weighing as much as a commercial aircraft door). The vehicle is built using titanium, ceramics, and a bombproof plate that covers the underside.

5) While the outgoing Beast was estimated to weigh between 14,000 to 20,000 pounds, the new generation is said to be lighter.

6) It's equipped safety measures like run-flat tyres, night-vision gear and oxygen supply of its own, along with a satellite phone and nuclear codes. It can also fire gas canisters out the front bumper.

7) The limo is powered by a 5.0-litre diesel engine because of its weight and size. Also diesel is less flammable in a firefight. There are reports that the old Beast supposedly had a 3 Kmpl mileage (except the new one to be the same). 8) Secret Service has a code for the limo and it’s not ‘The Beast’. It’s called ‘Stagecoach’ internally.

9) Usually the weaponry is not detailed by the Secret Service but the driver has a shotgun. We can’t even imagine what’s in the boot!

10) Lastly, the vehicle is supposed to stock the President's blood-type, along with a defibrillator and other emergency gear.

But then again, these are the things which are in public. Only God, Secret Service and a handful of GM engineers know what else is inside this masterpiece.