Here’s a look at the MiG-21 Bison fighter jet that took down the Pakistan Air Force’s F-16 Fighting Falcon.

What Maruti Suzuki is to the Indian automobile industry, MiG-21 is to the combat airplane industry across the globe. The USSR made MiG-21 is the first mass produced supersonic jet with an affordable price tag, that has been used by more than 60 countries for almost half a decade to guard their borders. Recently, an Indian Air Force MiG-21 made a round of news after the jet destroyed a Pakistan Air Force's F-16 Falcon in an air-to-air combat near LOC.

The whole incident started when a terror attack killed more than 40 CRPF soldiers in Pulwama, J&K. A few days later, 12 Indian Air Force Mirage-2000 fighter jets from Dassault Aviation, the French company who also manufactures the Rafale Medium Multi-Role Combat Aircrafts, entered Pakistani airspace and dropped 1,000-kg laser-guided bombs on the Jaish-e-Mohammed terror launch pads across the Line of Control. The Mirage-2000 are the same jets that helped India win the Kargil war. A day later, there were reports that Pakistan Air Force has deployed its F-16 Falcon fighter jets, made by the U.S. based Lockheed Martin.

As a matter of fact India placed an order of 40 Mirage-2000 in 1982 as an answer to Pakistan buying F-16 fighter jets. But this time around, the Indian Air Force deployed its MiG-21 jets to counter the much advanced F-16 jets. What came as a surprise is that the MiG-21 Bison, which is on the verge of the retirement, not only managed to tackle the F-16 Fighting Falcon, but also destroyed one of them. The pilot of Mig 21 Bison was IAF Pilot Abhinandan Varthaman, who is now hailed as a hero for destroying a much superior aircraft.

Here’s a look at the MiG-21 Bison fighter jet that took down the Pakistan Air Force’s F-16 Fighting Falcon! 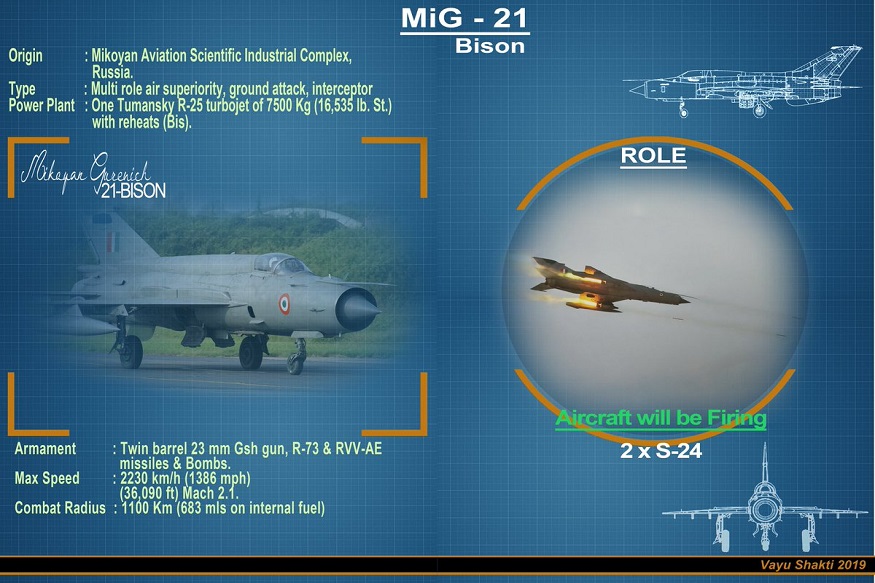 The first supersonic jet aircraft in the aviation history, the MiG 21 is one of the most known fighter jets on Earth. Having served 60 countries over a course of 60 years, the MiG 21 is still in service in many countries, including India. The development of MiG-21 began in the early 1950s and it was designed by Mikoyan-Gurevich Design Bureau in the Soviet Union. The 21 was nicknamed "balalaika" for resembling a pencil. The MiG-21 held a record for being the most-produced supersonic jet aircraft in aviation history, the most-produced combat aircraft and the longest production run of a combat aircraft.

The 21 is famous for its Delta Wings and the first prototype called the Ye-4 took its maiden flight on 16 June 1955 and made its first public appearance at the Soviet Aviation Day display in Moscow. The USSR built a total of 10,645 aircraft in three factories, whereas 851 units were built outside of the USSR, mostly by Hindustan Aeronautics Limited in India. In 1961, IAF opted for the Mikoyan-Gurevich Design Bureau made MiG-21 and since then has made 657 of these fighter jets, including three variants - MiG-21FL, MiG-21M and MiG-21 Bison. While India was one of the largest operators of MiG-21s outside USSR, India is currently the largest operator of MiG-21 Bison, with an estimated 100+ aircrafts on duty. However, the Bison are currently being used only as an Interceptor, the same as they did yesterday with the Pakistan’s F-16 and intercepted them.

The MiG-21 played a pivotal role in the 1971 India-Pakistan War, and they will soon be replaced by the indigenously made Tejas LCA by HAL. The MiG-21 has a notorious history of crashing due to technical snags and as per an estimate, more than 500 planes have been lost to various crashes all across the country.