The car that many in India were waiting for will be launching at the Auto Expo 2018 in India. After teasing the Indian automotive enthusiast for almost a year, Maruti Suzuki has finally decided that it’s time now to unleash the new Swift on the Indian roads. We had the chance to drive the 3rd Generation Swift recently in the twisty’s of Lonavala in Maharashtra and get you our first drive review of the all-new Swift. 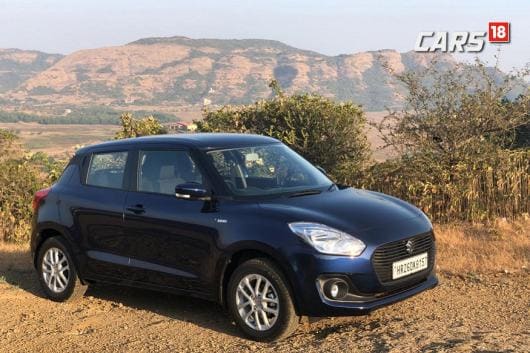 We love the fact that despite being an all new design, Maruti Suzuki has been able to retain a lot from the original. The floating roof design still is, as modern as it gets in the 21st Century. The new Swift also has become slightly wider than the outgoing model and also much more chiseled. What we love is the fact that despite being shorter than the older swift the car is able to hold a perfect stance on the road. The reason for that is that it has a 20 mm longer wheelbase than the previous model. The wider 40mm body also makes the car appear more humble in its new avatar.

The new single-frame front grille in black finish also adds that touch of sporty appeal with an aggressive face. The new LED projector headlamps with DRLs give one an idea that this car means business. In terms of the design, there is a right mix of aggression and humility. The rear door though was a love-hate affair for us. The door handles on the rear door are on the C-pillar of the new Swift. Sure, this makes the car look like a two-door hot hatchback from the side profile, but using the rear door handle is something which took us time to getting used too. The rear end has been also made to compliment the overall stance of this vehicle. The boot space has also increased by 58 litres on the new-Swift.

How’s It To Drive? Well there is no change on the engine front of the all-new Swift, but what you get now on the 3rd Gen version is an option to buy an AGS transmission in both the diesel as well as the petrol motor. The older Swift’s only niggling point last year was the lack of an automatic transmission, but now that has also gone out of the window. We love the fact that Maruti Suzuki has been keeping up the pace with the modern world and the Swift is something that will appeal to the millennials. In fact we wont be surprised if a lot of them will buy this car as their first car. The K12 VVT petrol and the DDiS 190 Diesel engine are retained by Maruti Suzuki on the new-Swift. We drove the manual petrol and diesel AGS for this first drive review.

The new-Swift is built on a 5th generation HEARTECT platform with high strength steel and that makes a big difference on how this car handles. On the winding roads of Lonavala, we were smiling all the while as the new Swift asks you to push it harder. The shorter gears made us happy and we felt at home with this one. Maruti Suzuki has brought back the peppiness that had been missing on the 2nd Gen Swift and for those who remember the first 1.3 litre engine on the Swift back in 2005 would enjoy this one even more. And they have been able to do this by not compromising on the fuel efficiency bit. No matter how hard you try this car refuses to give you a bad fuel efficiency figure. For us it has to be the petrol manual that takes our hear away in deciding between the variants of the Swift. It has performance, power and balance on its side. On the diesel AGS Swift we were expecting the usual. And that’s pretty much what we got - it was, seamless, hassle-free and full of fuel economy.

The overall handling of the the new Swift is precise and the steering wheel is something that you’ll love to use for a power slide (please don’t). The suspension the new Swift was also a sweet surprise for us. The car is planted all the time and you don’t have to worry about breaking something while negotiating potholes. The new Swift can eat bad roads for desert and still give you a comfortable ride for a hatchback.

What’s Inside the Cabin? Let’s just say the only thing that Maruti-Suzuki did not put in it was a sun-roof. In terms of tech equipment’s you get it all. The new cockpit inspired interiors with black finish and a touch of silver accents keeps things sane inside the cabin. The new dashboard is beautifully sculpted and for a moment we thought that it has a soft touch dashboard (well it does not), such was the appeal inside the cabin that it shouts premium all over. The flat bottom steering wheel is also done well and to the taste of the overall interiors aesthetics.

For the aircon unit, the knobs are gone and the new Swift get rotators that you will love to fiddle around with. On the top spec variant they give you a touchscreen infotainment panel with Apple CarPlay, Android Auto and MirrorLink. You also get a reverse parking camera and sensors for parking. The front seats will give you a hug whenever you step inside. One of the best front seats on a hatchback, there we said it for the Swift. The side supports ensure that you stay focused and in the middle of all the action. Rear seats though are pretty much the same, not enough legroom if the front seat is all the way back, and the seating is still a bit up right. But you do get ISOFIX seats for child seats now. In terms of safety the new Swift is packed with Airbags, ABS & EBD. So, it covers the basics when it comes to safety as well.

What do we Think?

We would say that Maruti-Suzuki is just getting started for 2018 with the new Swift. For a car company to better that was already the best is no easy feat, but if one has to learn that for the Indian market, they should definitely look at the Swift. It everything done right without going too much overboard. Having said that they might price it slightly higher than the out going Swift. The new-Swift manual petrol in our first impressions is a no brainier for people looking for a dynamic driving experience out of hatchback in India. The diesel is also as expected good.

Who Should Buy What?