A total of six customised Royal Enfield bikes were showcased at Wheels and Waves, one of Europe’s iconic motorcycling festivals, centred on classics as well as custom motorcycles, surfing, skateboarding and the culture that goes with it.

Royal Enfield unveiled the all-new BAAK Motocyclette build and ‘Nought Tea GT along with five other exciting custom motorcycles at the eighth edition of Wheels and Waves 2019. This year's edition for the event was 'Back to roots’ aimed at bikes that have taken inspiration from its legendary past. For the uninitiated, Wheels and Waves is one of Europe’s iconic motorcycling festivals, all centred on classics as well as custom motorcycles, surfing, skateboarding and the culture that goes with it: music, visual arts and other forms of expression.

Royal Enfield motorcycles also participated in riding events at Wheels & Waves. The “Two Smoking Barrels” nitrous-boosted drag racer showing the capability of the 650 Twin motor in the Punks Peak Rally, and a Himalayan taking to the dirt for the Swank Rally event. With pure and simple construction making them ideally suited for expressing creativity through the unique expression of the best custom builders across the globe. Here are some of this year’s customs- The custom motorcycle has been built jointly by Royal Enfield and BAAK Motocyclette. The all-new build has taken the Interceptor INT 650 in an absolutely new direction displaying excellent craftsmanship and attention to detail. The build harks back to the past, with a “bathtub” style rear fender concept, but expresses it through uniquely modern proportions. This blending of old and new to create timeless builds is a hallmark of BAAK’s style, and a perfect match to the back to basics purity of the Interceptor 650. The Nought Tea GT is based on the new Continental GT 650. Its design language combines a unique blend of style and function, developed in collaboration with the chassis experts at Harris Performance, the Nought Tea GT takes the stock Continental GT 650 and prepares it for the race track. Custom light-weight parts and Ohlins suspension highlight the serious potential of the build while the creative minds. An outstanding design highlight is a graphic to represent the flow of air over the bike which gives a very distinctive character to the motorcycle. 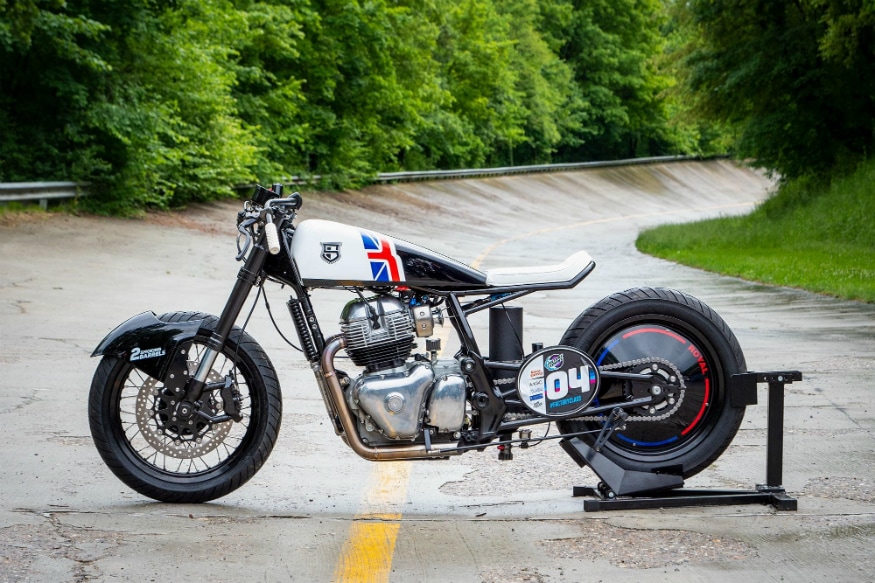 3. Two Smoking Barrels x Sinroja for the Sultans of Sprint

A stripped down, lean and mean drag racer in collaboration with Sinroja Motorcycles. Instead of trying to add more power, Sinroja decided to strip as much weight as possible, getting the build down to only 150 kilos. Designed to race against the high horsepower competition, Two Smoking Barrels is a real David in a field of Goliaths. MJR Roach is designed to survive anything. Inspired by video games, MJR Roach takes the base Himalayan and makes it the most it could be with enormous chunky tires, a forged aluminium single-sided swingarm, and - because why not! - a Garret turbocharger. MJR Roach is ready for whatever dystopian future your imagination can throw at it!

The Midas Royale from Rough Crafts elevates the stock Continental GT 650, stripping away weight and adding some of the best performance parts and materials available. All carbon body and rims are complemented by top spec Ohlins suspension and custom made chassis parts. The signature Rough Crafts black and gold treatment ensure that this endurance racer inspired build is fit for a king. Showcasing the long distance potential of the Interceptor INT 650, these two dedicated Rally builds were designed specifically for completing the Great Malle Rally in 2019, an end to end ride the length of the UK. One lucky winner, from a competition run in collaboration with Iron and Air magazine, will get to ride the black #1 bike, while the red #2 version will be the dedicated ride support vehicle. Both builds have long travel suspension, custom made Harris chassis parts and a host of other adjustments to make them the ultimate rally Interceptors.