Home » News » Auto » At 35, Mahendra Singh Dhoni Hasn't Given up on His Love for Bikes
2-MIN READ

At 35, Mahendra Singh Dhoni Hasn't Given up on His Love for Bikes

From riding bikes in Eden Garden to owning some of the most exotic bikes in the world. Dhoni's love for bikes says it all.

Indian cricket team's captain Mahendra Singh Dhoni, or 'Mahi', as fans call him, is known for his calm persona on the field. It also earned him the title of 'captain cool' which refers to his temperament, but for those who love motorcycles, the 'cool' refers to his collection of bikes.

His love for bikes is widely known and has been there even before Mahi joined mainstream cricket. It started with a Rajdoot and has now expanded to some of the most exotic bikes up for grabs in the world. The list is long so let's get to it. We couldn't choose a favourite among all these motorcycles and hence, the list is in no particular order.

The Rajdoot was Dhoni's first ever bike which he got for Rs 4,500 and being away on cricket tours meant the bike needed some attention. MS went on to restore this particular bike to all its glory. Kawasaki Ninja ZX-14R is one of the world's fastest bikes. Ever since the Suzuki Hayabusa one-upped every other motorcycle in the world in terms of sheer speed and acceleration, there was no real competitor to its throne for years, until the ZX-14R arrived. It is also called as the world's fastest accelerating bike by many, simply because of how fast it climbs speed figures.

The ZX-14R enjoyed the throne of the most whackiest Kawasaki in the world, until when the manufacturer made something even more intense and powerful – The Kawasaki Ninja H2R.

Finally the wait is over but another couple of months before I can take her on her first ride.guess the bike

Oh well, Mahi has that one too. Now it does take a bike lover to appreciate how good looking this bike is. A limited edition offering that's powered by a massive 2200 cc V-Twin engine, enough to make anyone go gaga over it. Thundercat was one of the better-know 600cc sports tourers of the world and no surprise it got the attention of Dhoni. And of course, an impressive bike garage just needs to have a proper cruiser. Which in this case, is a Harley-Davidson Fatboy.

His love for motorcycles extends beyond his garage too. Dhoni with Irfan Pathan and Robin Uthappa on a bike after winning the cricket series against West Indies in Vadodara January 31, 2007. (Photo: Reuters) 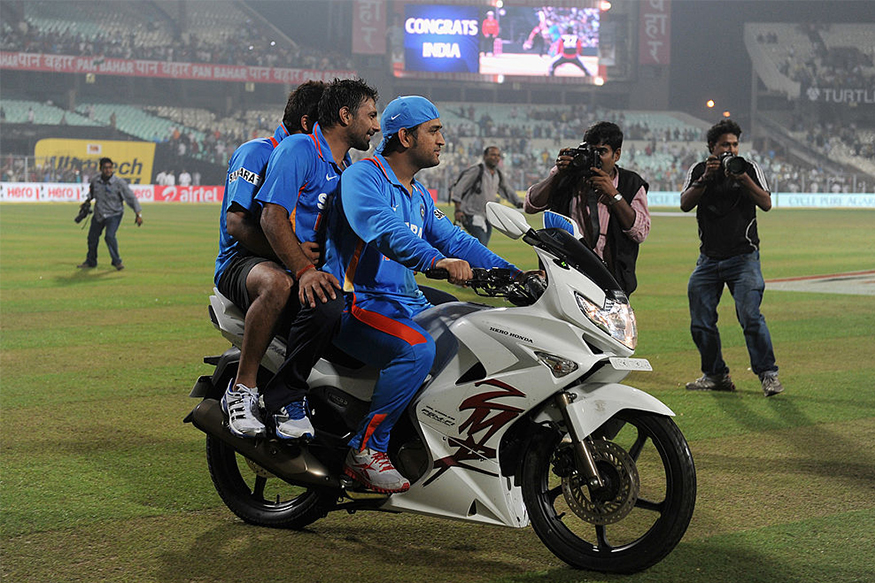 MS Dhoni and Praveen Kumar on a bike after the 5th One Day International between India and England on October 25, 2011. (Photo: Getty Images)

Mahendra Singh Dhoni's love for motorcycles has clearly not taken a back seat despite of him being busy with his cricket schedule and we can't wait to see what's the next big thing in his garage going to be!