This is the highest challan issued ever since the new motor vehicles bill has come into action.

A vehicle registered in Rajasthan has created a new record for receiving the highest fine for traffic violations under the new Motor Vehicles Act. Issued in Delhi by Rohini Circle police, the truck has been fined a whopping Rs 1,41,700 for violating traffic rules. This is the highest challan issued ever since the new motor vehicles bill has come into action. The fine has been deposited by certain Bhagwan Ram as seen on the fine receipt.

On closer inspection, the central vehicle registration database reveals that the vehicle is a Tata 4018.s heavy duty truck registered under the Bikaner RTO in Rajasthan. 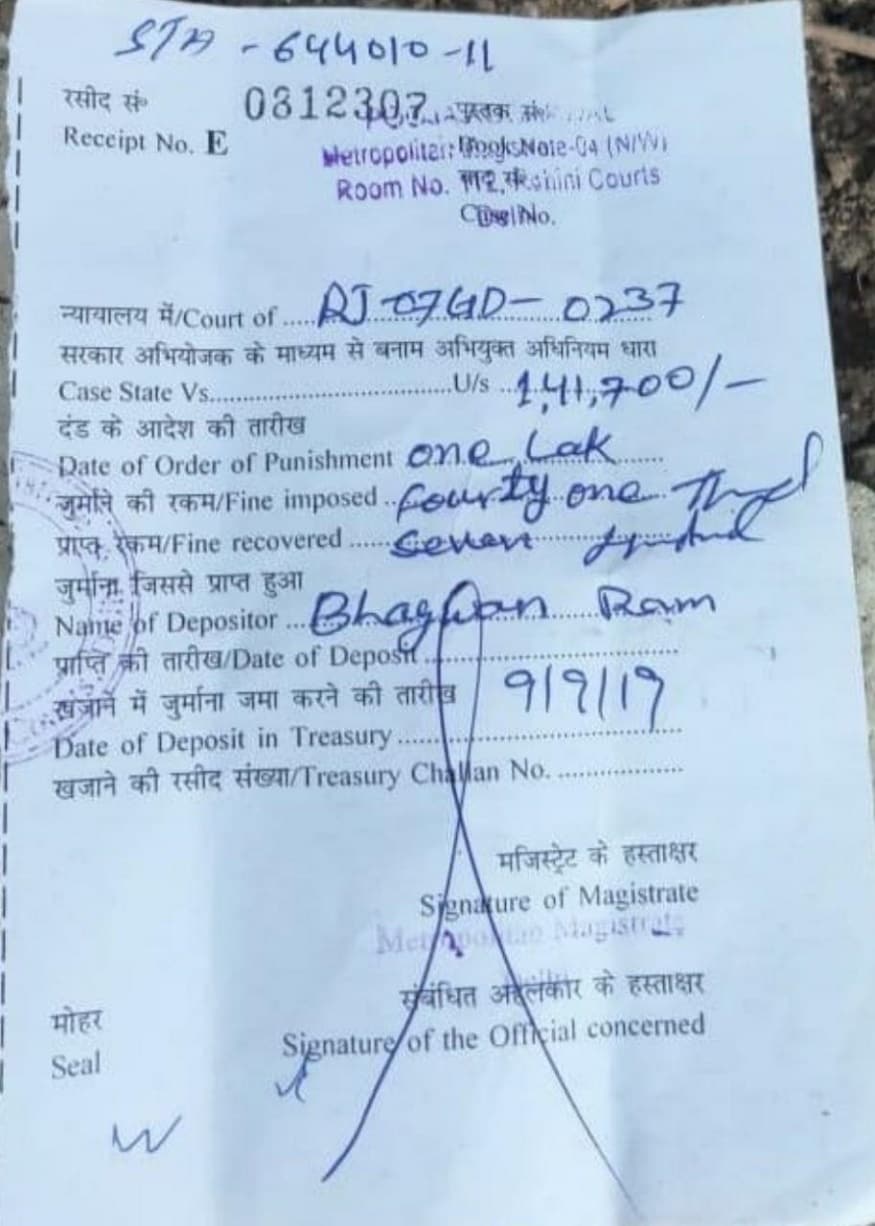 Earlier a truck driver with a vehicle bearing a Nagaland registration number was fined a whopping Rs 86,500 by the Regional Transport Officer in Sambalpur district of Odisha. According to Sambalpur’s regional transport officer Lalit Mohan Behera, truck driver Ashok Jadav was penalised a total of Rs 86,500 including Rs 500 for general offence, Rs 5,000 for allowing unauthorised persons to drive, Rs 5,000 for driving without a licence, Rs 56,000 for overloading with an excess of 18 tonne (total 42 tonnes, which was extra 18 tonnes from allowed wait), and Rs 20,000 for carrying over-dimension projections load.

Though the total fine amount was Rs 86,500, the driver paid a penalty of Rs 70,000 after negotiating with authorities for more than five hours. He also produced some documents against the fine. The truck bearing Nagaland registration number NL01 G1470 belongs to a Nagaland-based company BLA Infrastructure Private Limited was loaded with a JCB machine. It was en route Chhattisgarh from Talcher town of Angul district when it was intercepted by officials in Sambalpur. Odisha is among the few stares which started implementing the Motor Vehicles (Amendment) Act, 2019 from September 1, the day it came into force.

In the first four days of its implementation, the amended MV act has grossed the highest penalty in the country of over Rs 88 lakh. In the first four days, the Odisha Transport Department imposed Rs 88 lakh as a penalty, the highest in the country. An auto-rickshaw driver in Bhubaneswar was slapped with a fine of Rs 47,500 last week for riding his vehicle without an authentic driving licence, registration certification, insurance certificate as well as for drunken driving.
Tags