After Yamaha decided to ditch its 110-cc scooters, the Fascino got a bigger engine and entered the 125-cc segment. So we took it out for a spin to see what it's all about.

In its transition to BS-VI emission norms, Yamaha decided to ditch its 110-cc scooter segment which spawned the Ray ZR 125 and the Fascino 125. The last time we got our hands on the Fascino was at hotel premises which was quite not enough, which is why we have it now for a real-world test to see how it fairs against its competitors and whether it is really worth the purchase.

In terms of design, I would begin by saying that the new Fascino is definitely a looker. The inspiration as one can notice is derived from retro scooters and as compared to the older version, the new Fascino has an angled front apron with a headlight that is more concave. The mid-section has a lot of flowing curves that neatly joins the new elongated sharp rear. Combine this design with its livid colour palette like the Vivid Red that we had and it scores handsomely in terms of visual appeal. Now, the 125-cc segment has a few of the most potent offerings, offerings that are loaded with features. And that is a place where Fascino slacks. As compared to its prime rivals, the Fascino only gets an idle-start/stop function and side-stand cut off, mission out on inclusions like a USB charger or a boot lamp. Speaking of the idle start/stop function, we found out that the system was flawed, failing to cut off sometime or taking too long for the same. 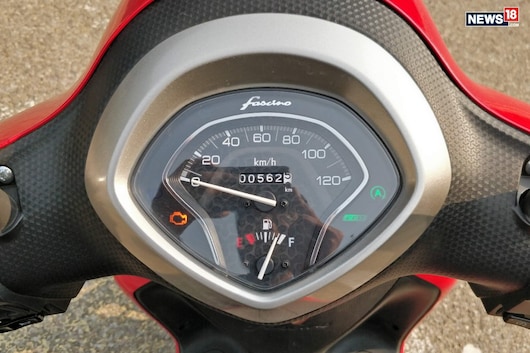 So as it transitions to the new emission norms the major change comes at its heart, the engine which is now a 125-cc unit that outputs 8.04bhp and 9.7Nm of torque. While this might not sound like much against its competitors, what impressed me was its power to weight ratio. 8.04bhp for a scooter that weighs below a 100kg and you know it's going to have impressive fuel efficiency. 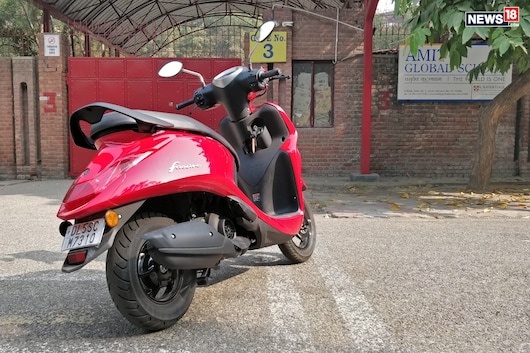 The suspension on the front as well as the back is sprung on a slightly stiffer side which means you will feel the little bumps as well and this along with the light kerb weight often made ride felt a little unstable. But pick up some speed and things improve considerably. The braking apparatus on the Fascino does a good job as well with good feedback and bite. So in order to sum it up, while the ride quality and the power figures may not be on par with the segment leaders, there are a few things that work in the Fascino's favour and some of these are its weight and the fuel efficiency that comes along and also the design that will definitely woo a lot of buyers. Hence, if you are out in the market looking to buy your first scooter, then there is no reason to turn your head away from the Fascino 125.