Delhi Pollution - All the Electric-Hybrid Cars You Can Buy in India: Mahindra, Tata and More

With air quality in Delhi at its worst, we bring you a list of all the electric-hybrid cars you can buy in India and help reduce vehicular pollution.

Now that the Diwali is over, Pollution has once again become the talk of the town and the capital region of Delhi-NCR is the one suffering the most. With air pollution reaching critical condition, government and citizens are looking for ways to counter and reduce the pollution menace. While factors like crop burning and cold weather play a major role in elevating pollution levels, we as a citizen can’t do anything about them.

What we can do is reduce our fuel consumption, as vehicular pollution is also a major factor in bad air quality. In our previous article, we listed the top affordable CNG cars you can buy in India and now we talk about the electric-hybrid cars in India. We know for sure that the future of mobility in India is definitely the electric cars. Pratap Bose, Head of Design, Tata Motors said – “A huge wave of electric mobility is coming, and nobody knows when. But when it comes, we want to be in the front.”

The problem though is, while the world has already accepted the electric cars as a mass segment, India is yet to accept the wave. Manufacturers like Mahindra, with e2O Plus and eVerito have already started rolling out mass products, while Tata has bagged a huge order from ESSL. There are also luxury car manufacturers like Lexus and Volvo who are offering their own hybrid products. Which brings us to a point of Hybrid vs Electric. People will buy EVs in huge numbers once a proper infrastructure is in place to charge these cars. And so, before going full-electric manufacturers are relying big on the hybrid cars. Here’s a list of all the full-electric and electric-hybrid cars you can buy in India–

The Maini Reva was the first affordable electric car ever produced in India by Chetan Maini. Soon, Mahindra acquired his electric firm and with the help of Maini himself, built the first e2O 2-seater car. Post that, Mahindra went a step ahead to launch the 4-seater version called the e2O Plus, with an all-electric range of 80 km, and easy charging.

With the expertise gained from the e2O, Mahindra is now replicating the same electric technology to their future cars. Strategically enough, Mahindra added the electric tech to the Verito sedan, with the same 80 km range. The car has a total of 4 variants to choose from, all within a range between Rs 9.2 – Rs 9.8 Lakh. Toyota has been on the forefront of hybrid vehicles globally. Toyota Prius is their most successful hybrid car ever, globally. However, Toyota added the same technology to the Camry executive sedan, and it was an instant hit in India. As per Toyota, more than 80% Camrys sold in India were hybrid, prompting the car manufacture to stop selling the petrol only version.

Honda Accord has a troubled past in India. While the initial model sold like hot cakes, the consecutive models failed to sell good numbers. Hence Honda shut the Accord brand in India, only to revive it again, this time with a hybrid only version. The Honda Accord Hybrid competes in the same space as the Toyota Camry Hybrid and Prius. 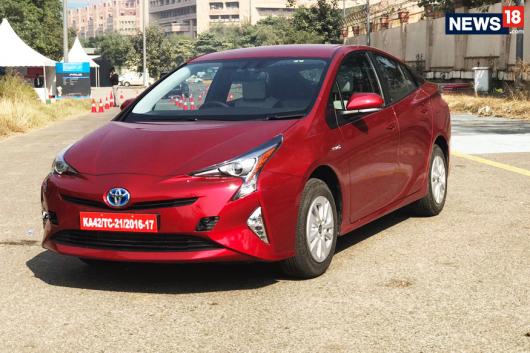 The car that started the whole Hybrid rage in the world – Prius – is also on sale in India for quite some time now. Loaded with a lot of technology, Prius is priced Rs 8 Lakh more than the younger sibling Camry. Toyota Prius is powered by a 1.8-litre petrol engine and a CVT transmission, with batteries supporting the green deal.

Volvo, the Swedish car manufacturer was known for its safety standards, but that was a long ago. Retaining its whole Safety game, Volvo is now trying to make each and every car electric. To start the revolution (we would like to call it one), Volvo added a hybrid version to the world’s safest SUV – XC90. The XC90 T8 Excellence was the only hybrid SUV in India when it was 1st launched. One might say that sportscar or fast cars and electric cars can’t go hand in hand, but BMW changed this notion many years back, when they launched the i8 coupe. The electric-hybrid sportscar had an all-electric range of 37 km, with a 0-100 kmph ability in less than 4.5 seconds. It also had the scissor doors making it all-appealing to the crowds.

The luxury arm of Toyota, Lexus is benefitted by the Toyota’s hybrid drivetrain supremacy. Every product launched by Lexus in India is hybrid, making it leagues ahead of other rivals. Lexus is present in luxury segments and has product under ES (denotes mid-size sedan), LS (denotes full-size sedan), RX (mid-size crossover) and NX (compact SUV) categories. Lexus products ranges from Rs 53.18 Lakh to Rs 1.77 Lakh (ex-showroom, Delhi).