A product like Tesla Semi would go a long way in promoting a conducive and healthy environment in the capital region. Here’s a look at how’s Tesla going to get it done!

For those living in Delhi-NCR, every morning feels like living in a gas chamber. The capital region is under a severe pollution outbreak and is facing criticism from media, residents and tourists. Such is the level of pollution that the Air Quality Index at certain places has stuck to the highest value of 999+. For the uninitiated, a value closer to 0 is indicative of clean environment and many countries in Europe has an AQI of 20.

That’s a massive shame for India’s capital city, which was once touted as the world’s greenest capital. So what went wrong? Where did we fall short of giving back to the nature? Among many other issues that add up to the pollution menace in Delhi, large number of commercial vehicles, especially long-haul trucks that pass through Delhi is the biggest threat. This is where Tesla Inc. comes in! Elon Musk, CEO of Tesla Inc. has unveiled the Tesla Semi electric truck, a fully electric truck with 800 km range, making it one of the most efficient and environment friendly commercial vehicles. A product like Tesla Semi would go a long way in promoting a conducive and healthy environment in the capital region. Here’s a look at how’s Tesla going to get it done!

Delhi-NCR acts like a crossroad for thousands of trucks passing through the capital region every day. Such is the placement of the capital city that it acts as a gateway for vehicles traveling from North to South and West to East. This brings thousands of trucks to Delhi’s borders every day, emitting a bucket-load of CO2. Now one may argue about construction activities and the number of cars plying on Delhi roads, but not many can deny how trucks have created a nuisance for the Delhi-NCR residents. Jams here, pollution there, commercial vehicles (especially big trucks) are a bad addition to the Delhi roads. While Delhi has curtailed the intensity of these polluting trucks to certain hours, it is not a lasting solution. Delhi has put a blanket ban on the movement of commercial vehicles from 7AM-11AM and 5PM-11PM. In the remaining hours, these trucks ply in huge numbers and Delhi’s environment is often taken for granted. The solution lies in a long term vision as trucks can’t be banned because of the obvious reasons. Your daily grocery, online shopping, vegetables are all delivered by these inland moving trucks.

So the solution is replacing these dated and diesel powered trucks with something more environment friendly, modern and easy to operate. And Tesla has just given us the solution in the form of the Tesla Semi long haul and short range delivery trucks. The Tesla Semi will have an all-electric range of 800 kms (500 miles) when fully charged. A full charge will take approximately 1 hour. But if you are in a hurry, a fast-charge option can give a 650 km range (400 mile) in just 30 minutes. Now compare it to an ordinary diesel long-haul truck. Tata Prima, which happens to be one of the country’s most modern trucks has a tank capacity of 625 litres, which takes 15-20 minutes to fill.

A fully loaded diesel truck would end up giving a 2 kmpl mileage, which equates to a 1000 km range on an average. So it is safe to say that Tesla Semi is equivalent to a diesel truck, but with lower emissions and also lower cost of operation.

Musk has said that on a 100-mile route, the Tesla Semi will average $1.26 per mile as compared to $1.51 for diesel trucks (U.S based figures). This means that an average driver will end up saving $200,000 for a million miles, which is a huge amount of saving. Now in India, a truck runs a million kilometers very easily. So these figures are not too distant or fairy tale worthy for Indian market too. 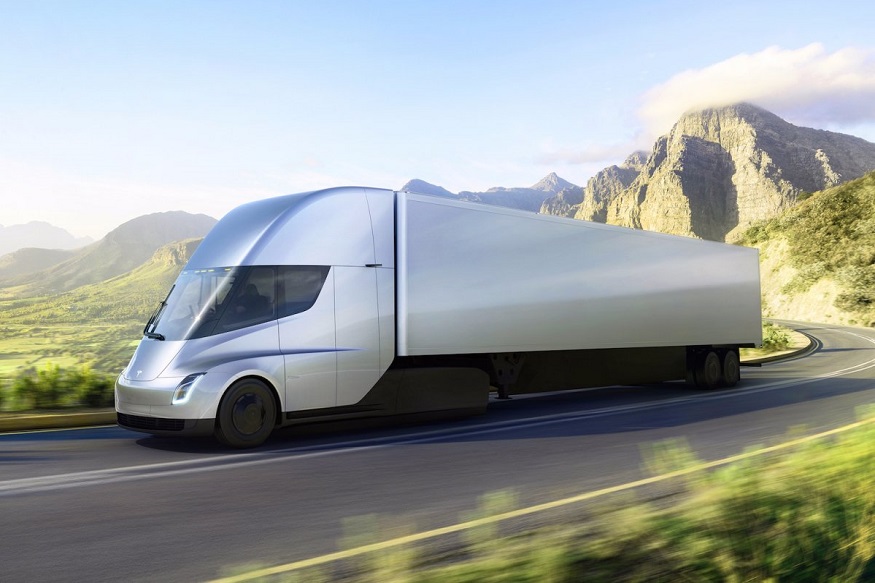 As we have been saying, the biggest asset that Tesla Semi holds is the battery that makes it such a special product. While Elon Musk hasn’t divulged any details about the specifications of the battery powering the Semi, he has given a hint stating Semi uses “less than 2 kilowatt-hours” of energy per mile, which means it will be a mammoth battery, equivalent to a the weight of a car as big as Mercedes-Benz G63 AMG!!

Going by the current battery packs in use now, a typical 50 kWh lithium-ion battery pack weigh about 7kg per 1 kilowatt-hour of stored energy. Now if Tesla Semi uses 1.5 kWh per mile and travels 500 miles, the battery has to be 750 kWh and will weigh 5000 kg. If consumption is closer to 2.0 kWh per mile, the battery size could go up to 7500 kg. In comparison, a diesel truck will use 400kg of fuel for a 500-mile trip, or 700 kg for a long-haul trip.

Also, the Regenerative braking will restore 98 percent of kinetic energy to the battery pack and provides “basically infinite brake life.”

The batteries will be charged by a new charging device called the Megacharger and the battery pack is designed to support 1 million miles of charging cycles. Which means if you charge the battery after every 500 miles, there will be 2,000 cycles, which equates to 40 years of truck life (if charged every 5th day).

Unlike conventional trucks, a battery powered truck or a car for that matter, has to be extremely efficient to utilize the full battery power and aerodynamics play a huge role in ensuring a vehicle is efficient to the core. On the contrary, heavy vehicles like trucks are not known for their aerodynamics, as their task is to pull tonnes of cargo/load. Surprisingly, Tesla Semi is highly aerodynamic and if Elon Musk is to be believed, it’s more streamlined than the Bugatti Chiron. Coefficient of drag (Cd) is the factor that determines how aerodynamic a vehicle is and here the values for comparison-

So it is pretty evident how efficient Tesla Semi is. While the shape of the truck is one factor, the flat undersurface also plays a huge role in ensuring a smooth air flow. Also, the big and heavy battery will be mounted low for an exceptionally low center of gravity, which also makes the truck crush-proof in an accident. Apart from the battery, the Tesla Semi will be loaded with next-gen features like the surround cameras for object detection, autonomous driving, enhanced Autopilot with lane departure warning and lane keep assist, automatic emergency braking, adaptive cruise control, and event recording. These things are a must for truck drivers in India.

While the long-haul trucks could be a thing of the future, thanks to the massive battery size (a 5000 kg battery means 1/4th cargo space in a truck), the most immediate applications can be a short-range truck with 100-300 km range, which accounts for 30% of all US trucking trips and somewhat the similar numbers in India.

Overall, Tesla says, “The Semi is more responsive, covers more miles than a diesel truck in the same amount of time, and more safely integrates with passenger car traffic,” something that Delhi-NCR needs immediately. Sadly, Tesla trucks will see the light of the day in 2020 and we don’t know if India is a market for Tesla as of now!