Ducati 959 Panigale Review: All the Superbike You Need

It's been on wallpapers, it's been on posters and now it's been tested. Is the Ducati 959 Panigale worth the 'exotic' price tag?

Manav Sinha
If I say the word superbike, then chances are that you will probably imagine a fully-faired, low-nose, high-tail, angry-looking machine and it will probably be red. That’s the way it was for me, at least, and it all started with a Ducati – the 999 in particular. I did not know about the power it produced, the way it handled or what trickery it had up its sleeve, or in this case, under the fairing. But one thing was for sure, it was the most beautiful motorcycle I had laid my eyes on. Until the Ducati 1198 came out. I fell in love all over again and the existing red superbike wallpaper (the 999) was replaced with the 1198. Then, came the 1199. Then, came the 1299. By now, you get the trend. Ducati knows their way around superbikes and they have been synonymous with the word exotic.

Fast forward to the present time and your best bet at getting an ‘exotic Italian’ motorcycle that packs in the performance and the recall value of a Ducati has to be the 959 Panigale. Yes, its price seems a bit on the premium side at first. But does it manage to justify itself? We take a look in this review.

Since we have spoken so much about design already, let’s get that out of the way first. The Ducati 959 Panigale comes across as this good simply because of the fact that almost everything is well proportioned to other. The stance of the motorcycle is bang on and elements like the exposed screws on the fairing as well as around the wind deflector give it some drama. The motorcycle has a broad ‘forehead’ and the wind deflector has a sharp curve giving the 959 a sense of speed. When you see the motorcycle in person, though, that is when you realise just how compact it is. It seems almost like a 600cc motorcycle whereas it is knocking on the door of the litre-class club. Yes, the side-slung exhausts look out of place but that had to be done given the increasingly-strict emission norms coming into the picture. 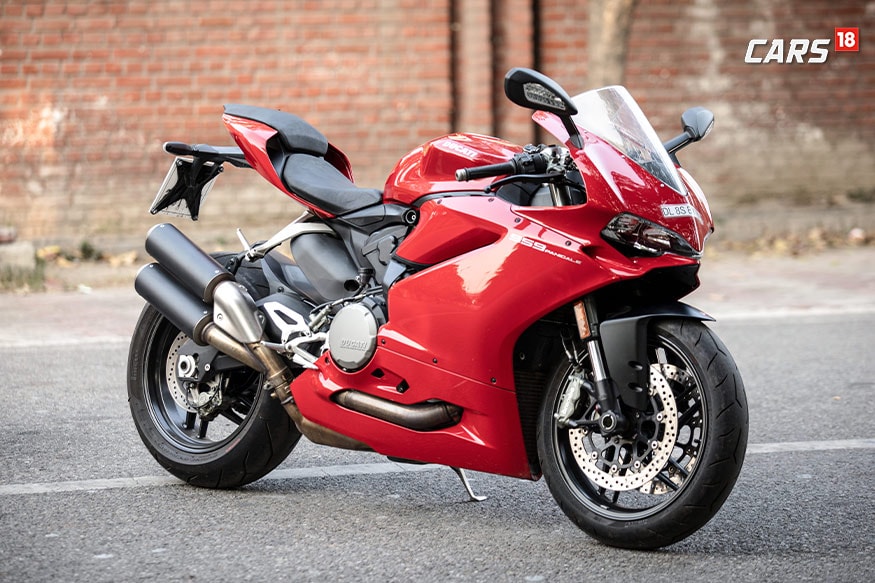 And when you look at it from the back, the minimalistic yet sharp tail lights along with the sharp and high tail, make it one of the prettiest back-ends on any motorcycle. Overall, this is a machine that lives up to the heritage of the aforementioned motorcycles and is one that can be your bedroom wallpaper as well. Ducati 959 Panigale has one of the best tail section designs. (Photo: Manav Sinha/News18.com)

But let’s put aside the design and talk about the mechanics of the 959. The motorcycle likes to be ridden in a particular way and it does take some time to adapt to it as it’s not the way a V-twin, or in this case an L-Twin, is expected to behave. Down low in the RPM band, it does not go the way it looks. The power delivery is served from a dropper and feels, dare I say, less. But once you are past that 7500 RPM-8000 RPM mark that power is served in dollops and it is then that it feels like a proper Ducati. It is powered by a 955cc L-Twin engine that makes 157 hp and 107.4 Nm of torque. This engine comes with a 6-speed transmission that also gets Ducati Quick Shift (DQS) and it is one of the better quick-shifters in the sub-1000cc motorcycles. The transmission, on the other hand, is one of the smoothest on any Ducati we have tested so far.

The best part about the ride experience has to be the direct throttle response, the chassis and suspension setup along with the Pirelli Diablo Rosso Corsa tyres – all of which make the motorcycle so capable in the middle of a corner and yet make it feel friendly and confidence-inducing to the rider. There are three ride modes to choose from which alter the power output, traction control, ABS and even the amount of engine braking on offer. The suspensions are adjustable too and there’s a steering damper on board as well. All of these customisations combined let you alter the motorcycle’s behaviour as per your exact liking and that’s a very good thing. 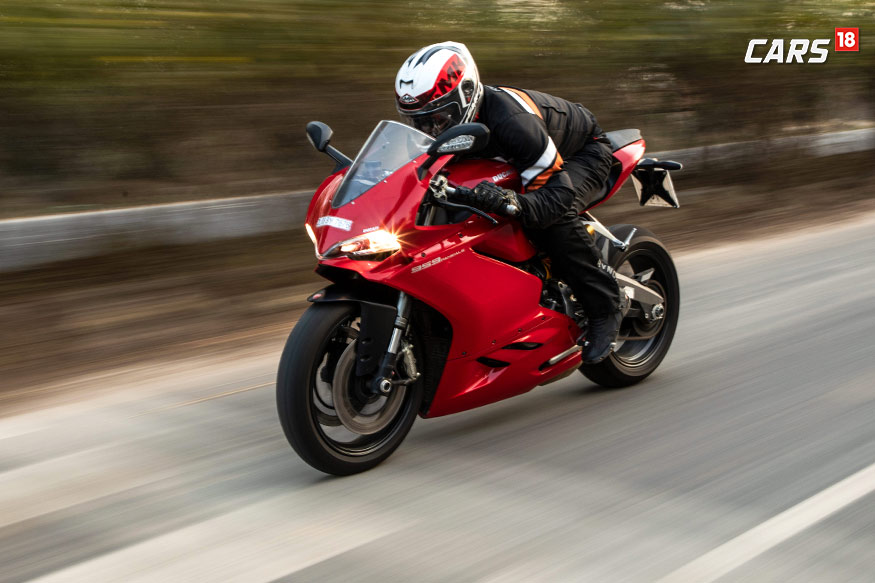 Ducati 959 Panigale has all the performance you would need. (Photo: Siddharth Safaya/News18.com)

But then there are some Ducati traits which I have not been a fan of and they make their way into the 959 as well. This includes the way riding modes are switched as you have to double tap the blinker cancel switch to access that menu. And if you use blinkers regularly and press the cancel switch multiple times just to be sure that the blinkers have been turned off, you have a distraction at hand, literally and figuratively. Also, the instrument cluster has the layout similar to that of the older Ducati Monster 821, which means, no fuel gauge on this one, just like the Scrambler as well. This is nitpicking, yes, but with regular usage, you would wish such wasn’t the case.

As for the riding ergonomics, the motorcycle has a very committed stance but for the rider, it is not that extreme. And as sportsbikes go, on the highway, the wind pushes your weight off of the handlebar and then it is not as tiring to ride this bike. In traffic though, it is a bit extreme. On a track, it is perfect. And in case you are wondering, the rear seat does have a use – you can keep rest your arm on it at stop lights. Pillion riders, not so much.

But then again, you should expect nothing different from motorcycles like the 959 Panigale. They are meant for performance and performance only. And in order to deliver on that, some commitment from the rider is also required. And when it comes to performance, there’s nothing quite like the Ducati 959 Panigale. With a dry weight of just 176 Kg, the motorcycle turns direction at the drop of a hat and in a snap. On the straights, you could put most of the motorcycles to shame and in corners, you wouldn’t want the turn to end. The motorcycle might tire you out in certain riding scenarios but the moment you get off of it, and look back at the 959, you would want to get back on it right away.

And when you think of it, the baby Panigale manages to strike a balance which very few motorcycles have managed to do in recent years and there are rarely any which are doing it right now and are on sale. The 959 is all that more you wish a 600cc would offer and yet is not a mind-bending 200 hp litre class motorcycle that has way more performance than you would ever use, or need. It is similar to what the Suzuki GSX-R750 did in the early 2000s which today has become an icon. In this case, it is already an icon, a Ducati and a Panigale.

But even if you were to strip away the Ducati badge and the Panigale nametag and look at it as just a simple machine. Even then, it is something that you won’t mind swinging a leg over for a long, long time.