214 horsepower, 0-100 km/h in about 2 seconds and looks that make it a bedroom wallpaper machine, is the Ducati Panigale V4 perfect?

Everything about the Ducati Panigale V4 is larger than life. The way it looks, the way it sounds and the power it packs within it. Then there's the legacy of the 'Panigale' series of motorcycles and also the fact that the V4 marks the entry for Ducati into a new era as they bid goodbye to the iconic L-Twin engine, which they are known for, in favor of a 4-cylinder engine put together as a 'V' – a V4 layout in simpler terms. The name of the motorcycle couldn't be simpler. But describing the feeling of pushing a 214 horsepower motorcycle as much as one dares, well that's a bit tough. 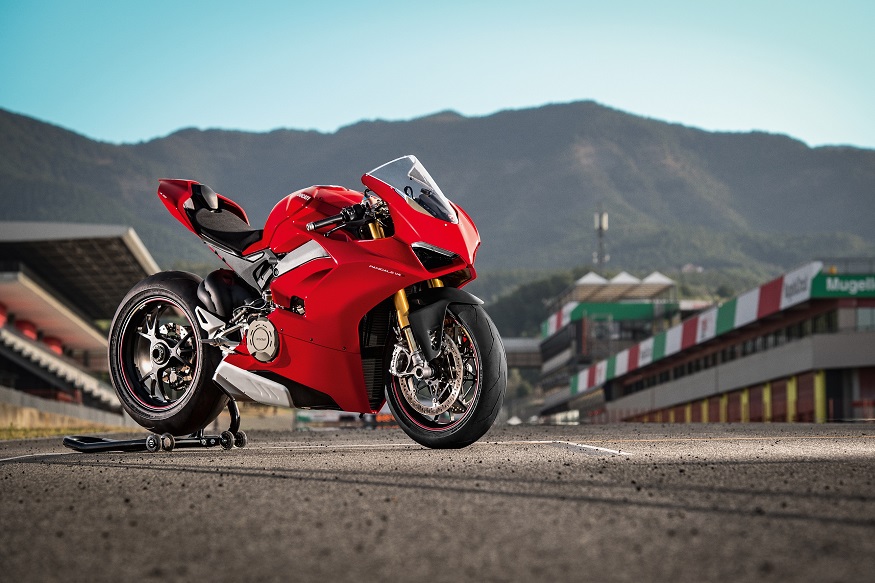 The place was the Sepang International Circuit in Malaysia – one of the best-known racetracks in the world which has hosted numerous Formula 1 and MotoGP races, for years. Known for being challenging both on the rider as well as the motorcycle as the track puts forth long sweeping corners, back to back hairpins, sharp corners and two very long straights that can make machines run out of breath as they are pushed to the limit of acceleration, top speed and brutal braking – twice, every lap. 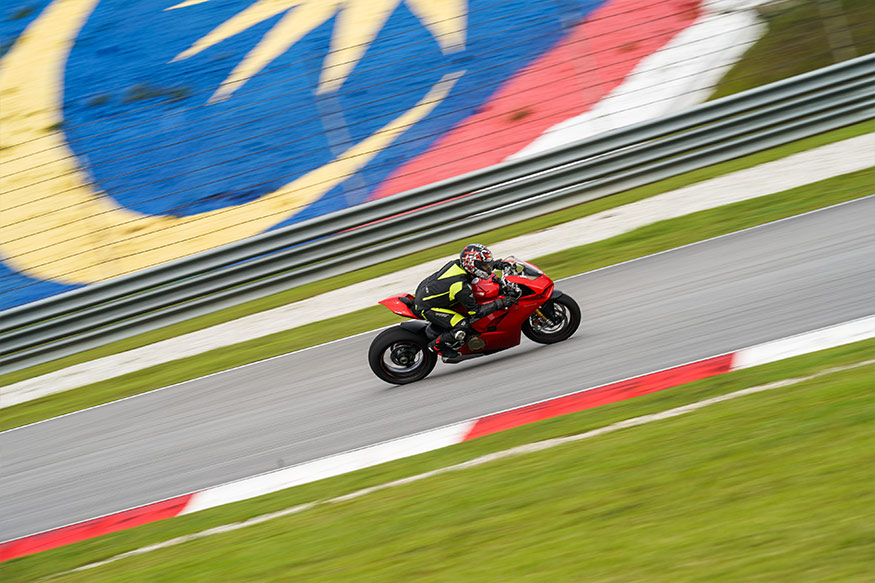 So when I was told that I will be handed the keys to the Ducati Panigale V4 S, the more performance-focused version of the base V4, at the Sepang International Circuit, there was a sense of unmatched excitement as well as concern when it came to thinking about how would riding one of the most powerful motorcycles in the world, at a racetrack that I have never ridden on, be. A mix of feelings that came back at least ten times stronger when I saw the V4 for the first time at Sepang at the night before the track day.

Fast forward to the time when the V4 was fired up for the first track session and the bike, surprisingly, did not sound that different. For those familiar with the typical Ducati L-twin clatter during a cold start, it is not that different. Where it is different though, is at the higher RPM where it sounds like a MotoGP motorcycle – godly. But before we get to the performance, have you seen just how gorgeous the Panigale V4 is? It isn't as sharp as the 1299 Panigale but it is a lot more butch and that's thanks to the layered fairing design which make the V4 look more aggressive. And even with the strict emission norms and despite the increase in the number of cylinders, Ducati has managed to pack the exhaust under the belly and that's incredible. The front headlamps are a piece of art and give the motorcycle a face that you will remember. And, from the back, the tail section has become sleeker and when you couple that with the wide rear tyre, oh boy is it a looker. All in all, the design is a 10/10 and the motorcycle is bedroom wallpaper material. The headlights of the Ducati Panigale V4 have an aggressive shape. (Photo: Ducati)

When it comes to walking the talk, well, it is an Italian superbike. The sheer acceleration of the V4 is unlike anything I have ever experienced before. It has a kerb weight of just 195 kilos after all and for the nerds out there, this is more hypercar territory power to weight ratio being delivered by just one wheel. But it took only a handful of turns to realise that the wide array of electronic rider aids make sure that you are able to enjoy all of this performance without having a heart attack.

To talk about all of them would pretty much take up the day. But to keep it in short, the electronics enable you to go faster and give you the confidence to push it more and more, turn after turn. The motorcycle feels really compact and it turns in as soon as you think of turning. And there are just so many things that work in symphony to take care of most of the tasks, for you, that might have thrown you off of your line. The Ducati Panigale V4 is agile yet sure-footed. (Photo: Ducati)

For example, the suspension speaks to the Inertial Measurement Unit (IMU) on board and recognises when the rider is braking to enter a corner, or, accelerating out of one. As a result, the compression is changed at the front or the rear accordingly, in real time. The engine itself is mounted slightly tilted to make for a longer swingarm which results in better stability in the middle of a corner while the wheelbase of the V4 remains similar to the 1299 Panigale, which means it loses none of the well-known agility. The suspension setup is telepathic in feel and can be altered electronically, that is, through the buttons on the handlebar. There is a quick shifter which allows you to upshift and downshift without the use of the clutch lever and is lean sensitive as well.

Speaking of lean sensitive so is the traction control, engine braking control, wheelie control and ABS. And, that’s not it. The motorcycle also comes with a lean sensitive slide control system that allows you to slide into and out of the corner if you dare to do so, or in case of a rider mistake. And if you really want to take it up a notch, you can also turn off the ABS for the rear wheel. 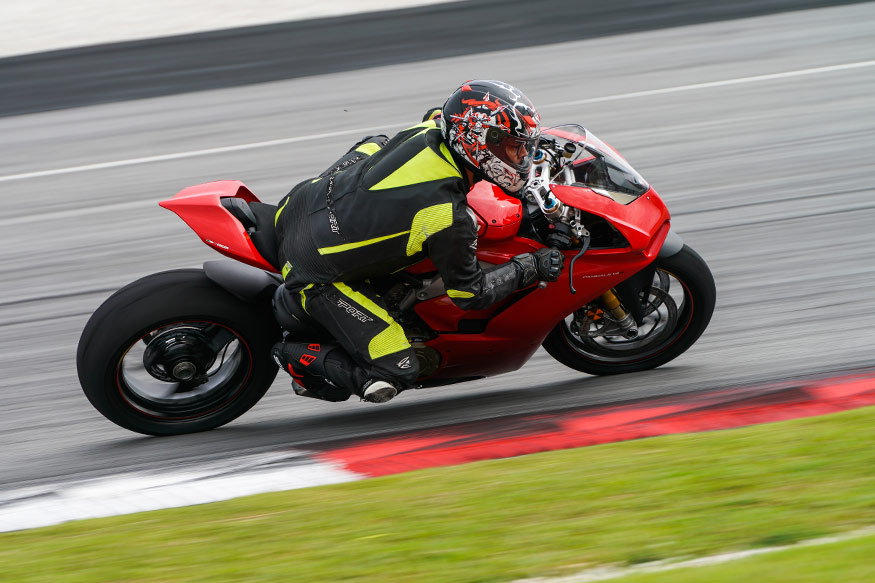 Special mention for Pirelli as they worked with Ducati and developed tyres which are not only specific to the V4 but also is the closest you can get (legally) to a proper race tyre. This makes the motorcycle feel like it is running on glue as there is ample grip no matter how much you lean and how hard are you cornering.

So yes, lots of electronics and hardware in the V4 but what all of this enables you to do is that you can forget about everything while riding and yet learn so much.

So, if you are an amateur rider, you can play around with your downshifts and upshifts without worrying about the clutch, you can end up in a controlled slide in corners, you can brake hard and accelerate hard and can pop controlled wheelies too. The only thing you have to focus on is getting your lines right around a track.

And, if you are an experienced rider, all these rider aids and the mechanical magnificence open up so much time in your mind that you can use all of these factors to push your braking marker a bit further, make your corners tighter and overall go faster than before. And while all of this happens, you have the company of the beautiful engine that manages to deliver the grunt of a twin-cylinder engine at low RPMs and still have the high-end madness of a four-cylinder motorcycle. The Ducati Panigale V4 is one of the best track machines that money can buy right now. (Photo: Ducati)

If you are wondering how is it to ride on regular roads, well, for that, we will have to wait for a complete road test in India. But when it comes to riding at a racetrack, the Ducati Panigale V4 makes for one of the best track machines that money can buy right now.