Ducati SuperSport S First Ride Review: The Most Sensible Ducati For Your Money

The Ducati SuperSport S makes for a sensible choice for those looking for a sporty yet comfortable motorcycle.

Ah, the looks. Now, when we say the word Ducati then chances are that the image that comes up in your mind is a flashy red sporty motorcycle that’s drop-dead gorgeous. The SuperSport sticks true to that image and has Ducati written all over it.

From the front, the fairing takes design cues from the Panigale family of motorcycles, especially the 959. What’s different is that there are no visible screws on the fairing like the 959 has and the fairing gets ample creases and curves along with neatly integrated scoops, which give it a tough look. The fairing also intrudes into the headlamps which have an ‘X’ sort of a shape. Ducati aficionados will notice that the upper half of the headlamps, which also act as Daytime Running Lights, are similar to the headlamp layout of the Multistrada. Whereas, the lower half is similar to the Panigale. It does look a bit awkward at first, but when you look at it in reality and turn those daytime running lights on, it grows on you and looks gorgeous. Look closer and you will notice the Ducati Trellis frame peeking out of the fairing – which has been derived from the Ducati Monster. It’s not exactly the same frame, though, as it has been tweaked in order to make the engine a stressed member, unlike the Monster. The resemblance continues at the back to as the tail lights are the same as the monster.

The SuperSport gets its own design elements too. It gets a sculpted, muscular fuel tank and the short and stubby exhaust looks great. Speaking of great, we couldn’t get enough of the single-sided swingarm which leaves those gorgeous rims exposed and gives the bike a great side profile.

As for the instrument cluster, it is the same which has been there on several other Ducatis too. It is an LCD unit that is very easy to read and is properly visible even under sharp sunlight. It displays all the information that a rider would need. And yes, it does have a fuel gauge on board as well, phew. 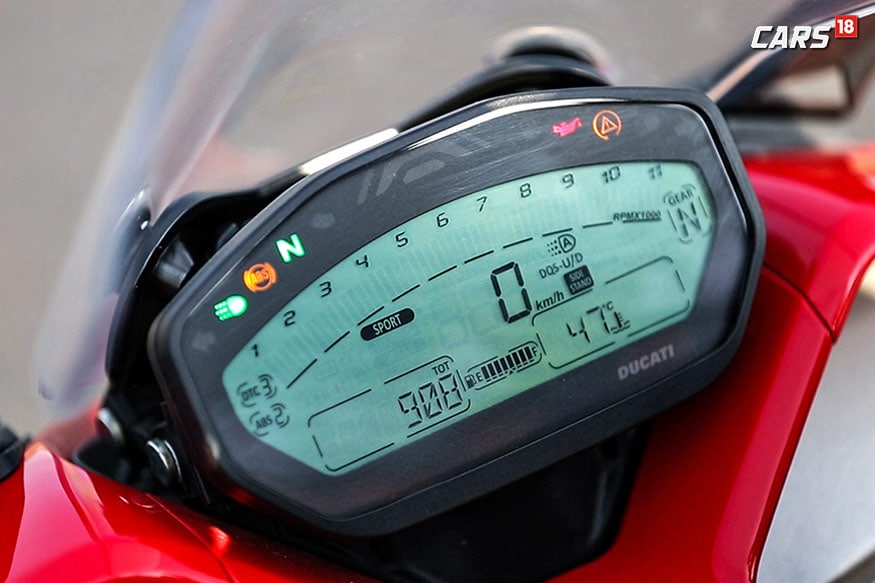 For those concerned, the Ducati SuperSport has a 16-litre fuel tank and as per Ducati, it should give you a range of a bit over 300 kilometres on a full tank.

The best part about the Ducati SuperSport is the versatility that the motorcycle offers. Note that Ducati has been very particular about not calling the SuperSport a sport-tourer and calls it a sport-road instead.

The riding position of the Ducati SuperSport is only slightly sporty as the footpegs are placed at a very comfortable position which is only slightly rear set from the position of your knees. The seat is comparatively low at 810 mm which means that you can plant your feet firmly when the bike is not in motion. Interestingly, there is a choice of multiple seats as accessories which will alter the seat height to a gain or decrease of about 20 mm. The handlebars make you reach out for only slightly, giving you the ‘over the bike’ sporty feel. For those long distance commutes, the bike gets adjustable plexiglass wind deflector which has a generous travel of about 50mm and works well in deflecting off the wind off of your helmet, in turn reducing rider fatigue. The higher-spec ‘S’ variant of the SuperSport gets a quickshifter and an auto-blipper too with the six-speed transmission which means you can enjoy hassle-free upshifts and downshifts as well. Trust us when we say this, it makes a world of a difference in long commutes.

The engine on board is where the Hypermotard element comes in. It is the same unit as on the Hypermotard which also does duty on the Multistrada 950, all in different states of tunes of course, and it is the as the heart of the SuperSport too. The 937cc L-Twin engine produces 110 horsepower and 93 Nm of torque. When you add to the equation the 184-kilo dry weight of the SuperSport, then the power is actually in just the right amount. The engine is smooth, refined and delivers all the power in a linear fashion across the rev range. The fuelling on this is great as well. When it comes to the handling department, the bike is agile and quick to change direction making it easier in tackling everyday traffic. When it comes to the fast corners, though, you commit to a line and the motorcycle sticks to it and is confidence-inspiring. This is due to two reasons – the fully adjustable Ohlins suspension at the front and back of the SuperSport S and the fact that the bike comes with Pirelli Diablo Rosso III tyres which can’t be appreciated enough. As for braking, Ducati has given the SuperSport Brembo M32s at the front instead of the M50 callipers like the 959 which, according to them, was to give a more modular brake experience and it actually works. The front-end gives great feedback and bite even under intense braking.

And let’s not forget, the host of electronic rider aids on board. The SuperSport has multi-stage Anti-Lock Braking System (ABS) and Traction control which adapt themselves as per the selected riding mode. Speaking of which, there are three riding modes – ‘Urban’, which cuts the power output down to 75 horsepower and is meant for city riding, ‘Touring’ which gives all the 110 horsepower at your disposal but with a milder throttle response and ‘Sport’, which when engaged, puts the SuperSport is Super Sport mode. See what I did there? No? Okay.

The Ducati SuperSport has its share of negatives too. The biggest one is the heat that can be felt from the cylinder heads no matter what speed you are doing and that can be a bit of a problem given the traffic condition of our roads.

Then, comes the wind deflector, which despite being extremely helpful is difficult to pop up while riding the motorcycle as the hinges are too stiff, making it more cumbersome than it should be. Although the Ducati SuperSport takes a different approach to its design of a sport-road motorcycle, it will be inevitable pitted against the likes of the Kawasaki Z1000 and the Suzuki GSX-S1000F, both of which are known as great sports tourers in their price bracket.

The Ducati SuperSport comes at a price tag of Rs 12.08 lakh and the SuperSport S comes at Rs 13.39 lakh. The ‘S’ variant also comes with a white colour option which costs Rs 13.6 lakh (all prices ex-showroom, pan India).

So the final question is what are you getting for your money? Well, this is a Ducati that is fit for your track days, your weekend getaways and is actually the best full faired Ducati that you can ride to work in every day, but yes, it does come with a hefty price tag. So, if money is not a problem and sportiness is something you love, then this is the most sensible Ducati you can buy.