With its quirky egg shape and minimalist interior, the bubble car was a symbol of cheap and cheerful mobility on European roads in the 1950s and 60s. Today, two Swiss brothers are developing a new version of the two-seater, a full 56 years after BMW halted production of its famed Isetta after churning out more than 160,000 vehicles. Oliver and Merlin Ouboter have more than 7,200 orders for their Microlino, a modern version of the Isetta which swaps the old single-cylinder petrol engine for a 20 horsepower electric motor but keeps the famous front-opening door.

The brothers, whose father Wim made millions from modernised kick-scooters, plan to launch the car in December. "The average modern car is way too big for normal use," said Oliver, the project's 24-year-old operations chief. He cited statistics showing the average car journey involves 1.2 passengers driving less than 35 km. They built two prototypes in China and displayed one at the 2016 Geneva Motor Show, where enthusiasts received them warmly. "We started a reservations list with 500 spots on it, and in three or four days it was filled up," said Merlin, 22, the chief marketing officer.

The Microlino will be built by Italian manufacturer Tazzari, which has a 50 percent stake in the project and eventually plans to produce 5,000 of the vehicles per year. With the car retailing for 12,000 euros, pre-existing components keeps costs down. The engine, for example, is a modified version of a fork-lift powerplant, and the door handles come from the Fiat 500.

The standard vehicle has a range of 120 km and a top speed of 90 km/h. It charges in four hours from a normal plug for roughly 1.50 euros. Its trunk holds up to 300 litres, while the instrumentation is bare bones. 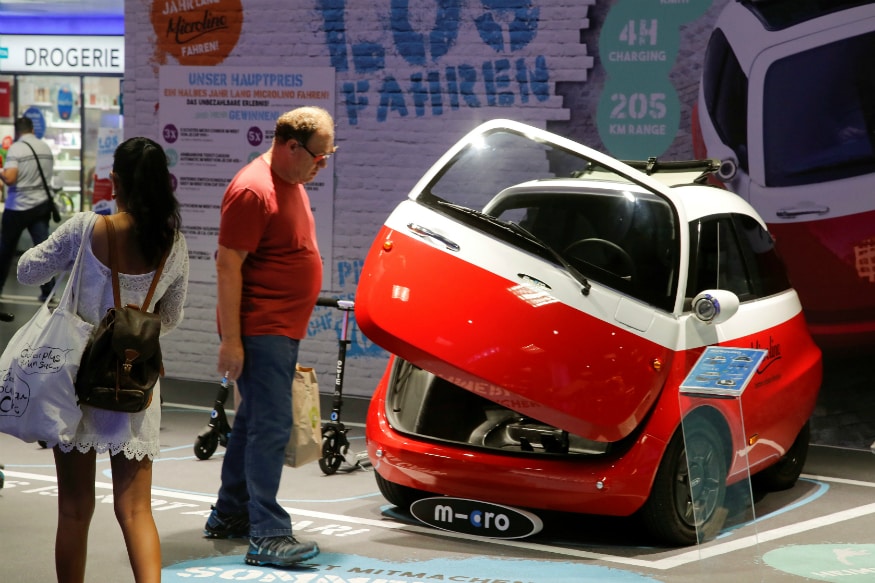 An electric-powered Microlino car built by Swiss Microlino AG is displayed in a shopping mall in Zurich. (Image: AFP Relaxnews)

"We have stripped a lot of the needless instruments out," said Oliver. "In modern cars you have so many buttons I honestly don't know what many of them are for." Only 2.4 metres long, it fits in a tiny parking space and its front-opening door means occupants won't be boxed in.

After launching 100 units this year, the brothers from just outside Zurich plan to build 1,500 to 2,000 cars next year, eventually increasing that to 5,000 per year. If they are a hit, annual output could reach 10,000 vehicles. "We hope this in some small way can contribute to more environmentally friendly mobility," said Merlin, "but also do it in a fun and cool way."