Have you ever wondered how would the cars of the future be like? Well, we got a chance to experience the car of the future in the form of the Autonomous ‘Robo-Taxi’ which was powered by the ZF ProAI RoboThink supercomputer, all the way in Las Vegas. Interestingly, this car does not need a human to be driven around!

Cars, as we know it, are about to change. The whole automotive industry is going through a transitional phase and they are set to be electric and autonomous. When it comes to autonomous driving, ZF is one of the key innovators in the industry. And, we went all the way to Las Vegas to check out their latest driving technology.

At first glance, the car that we had to experience looks like any other car you might have seen on road but look closer and it is nothing like any car you have ever seen before. The reason is simple – this one does not need a driver to go about its business. And that is thanks to the magic of technology, by ZF. 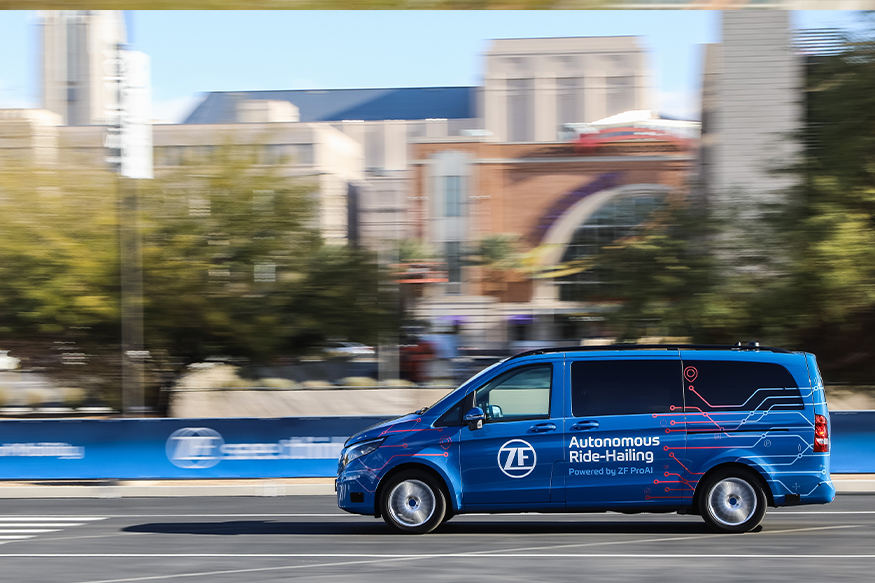 Getting the taste of future. (Photo Courtesy: ZF)

These are what ZF calls as ‘Robo Taxis’, and they can be summoned by simply using your smartphone. Since these cars are connected to the cloud and using an extensive array of gizmos like Radar, LiDar and camera sensors to understand the world around them, these cars are capable of finding their way to you. That’s not it, once inside, you will notice that the ZF Robo Taxi doesn’t have a steering wheel or any pedals down below. Being seated in a car without a steering wheel feels unceonventional. (Photo: Manav Sinha/News18.com)

What it does have instead, is a large screen in the middle that showcases all relevant road data which is flanked by two touchscreens through which the occupants can tell the car where they have to go. Once you do that, the car will simply be on its way to the destination. That’s not it, because of all the data that the car captures also helps it in keeping in mind the safety of the passengers as well as the pedestrians alike and can take necessary manoeuvres as well. This is the supercomputer, or one might say, the 'brain' of the car. (Photo: Manav Sinha/News18.com) When the car said the golden words. (Photo: Manav Sinha/News18.com)

But here’s where it gets interesting. ZF says that the RoboThink can be modified and tweaked around with to have it work as per the precise requirement of those who are using this – which means this can be used in several applications. That’s not it, ZF is also working on what they call as the Sound AI. Which, pretty much like a human being, listens to what’s happening around the car. Case in point, listening out for sirens from the likes of ambulances, fire trucks and so on and in the future, the autonomous cars will also learn to give way to these vehicles. Add to that the fact that ZF is already a leader in making some of the best Radar, LiDar and camera-based systems and when you put all of this together – you are really looking at the future. A prime example of which is the e.Go mover which ZF showcased at the 2019 CES in Las Vegas. The company has equipped this with electric drive systems, steering systems and brake systems as well as ZF’s ProAI central computer that makes use of artificial intelligence along with a long line-up of sensors which enable automated driving functions. And as futuristic as it looks, it is entering series production this year itself – in 2019, which basically means – the future is closer than it appears! The car can be summoned useing a smartphone. (Photo Courtesy: ZF)

But of course, when it comes to the end user. Well, it is really as simple as it sounds. You take out your phone, summon a Robo Taxi, it drives itself while taking care of everything that could come its way, you reach the destination and the car goes on to the next person. And all of this happens, while ZF watches out for you and makes life just a bit simpler.