Ford EcoSport S First Drive Review: The EcoBoost is Back in Black

The Ford EcoSport S has been launched in India as one of the sportiest, and the smartest, compact SUV that you can buy. And, it brings back the EcoBoost engine to help deliver on that claim. We test it out to find out how it fares.

Manav Sinha
Ford recently gave the EcoSport a mid-life facelift which brought along a new face, new design elements, new features and also – a brand new 1.5-litre petrol engine named ‘Dragon’. The updated EcoSport ticked a lot of checkboxes and brought it back as one of the most feature-loaded cars in the segment, there were a few things that some were lift wishing for. Now, they have come out with the Ford EcoSport S, which is based on the Titanium+ variant of the car and brings along with itself even more features. And more importantly, it brings back the EcoBoost engine.

Let’s start with the exterior design changes in the car. The EcoSport S looks more aggressive than the regular EcoSport thanks to the blacked-out elements it has received throughout the car. The front headlamps are now HID units and get a blacked-out treatment which goes along nicely with the new paint scheme that the EcoSport S gets. The fog lamp encasing, the lower lip and the front grille have received similar treatment too. At the back, the tail lamps have been given the smoked treatment and the spoiler has been blacked out as well. The same has been done to the roof as well which gets a gloss black finish and so does the rear spoiler. There is an ‘S’ badging at the back but the best way to recognise the car would be by the new 17-inch alloy wheels – the biggest wheel size amongst all EcoSport variants – and the design of which is simply fantastic. And of course, there is the inclusion of an electrically-operated sunroof in this variant – something that a lot of people have wished for in earlier versions of the EcoSport. 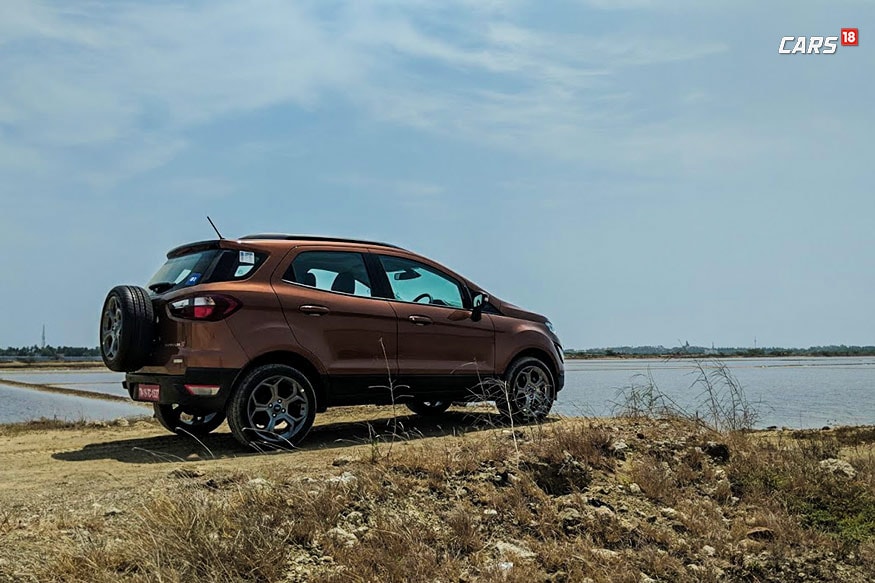 Coming to the inside of the car, the interiors come shod with the same layout. The difference, though, is that the EcoSport S gets several orange-accents throughout the cabin. The leather seats also get orange stripes and the steering wheel gets contrast orange stitching – all of which make the cabin feel very upmarket and premium. The fit and finish are fantastic as usual and it has now become one of the best cabins in the compact SUV segment in India. Also, Ford has given the accelerator, brake and clutch pedals of the EcoSport S an aluminium finish which is a very nice touch. Another noticeable change inside the car is that the instrument cluster has got the addition of a 4.2-inch MID unit which showcases almost everything you need to know about the car and can be operated through the steering-mounted controls. The system also introduces the Tyre Pressure Monitoring System (TPMS) in the EcoSport which is exclusive to the ‘S’ model. 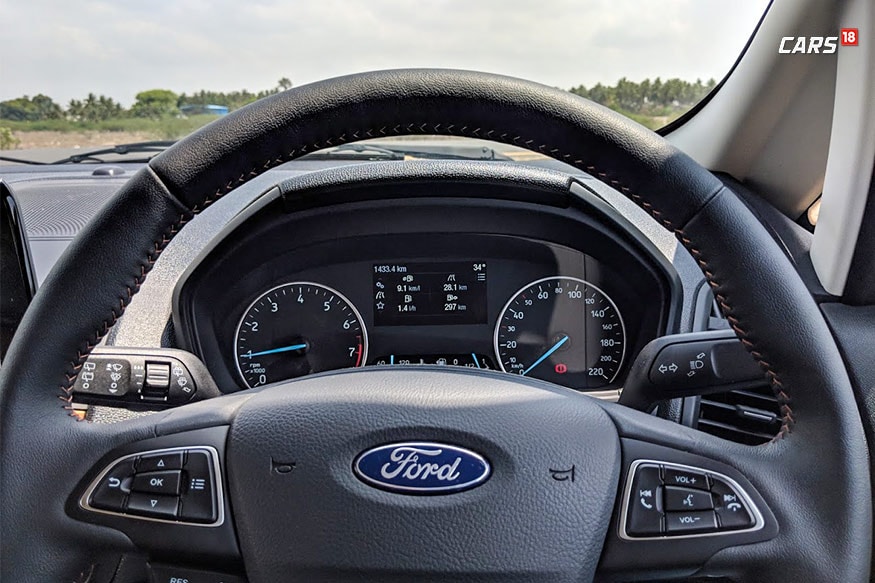 The biggest change for those who are familiar with the older EcoSport, however, would be the return of the EcoBoost engine. This is a 1.0-litre in-line three-cylinder engine which produces a whopping 125 PS of power and 170 Nm of torque. This is about 2 horsepower and a sizeable 20 Nm torque more than the existing, and also recently introduced, 1.5-litre Dragon petrol engine. That’s not it, not only is it more powerful but it also claims a higher mileage figure of 18.1 km/l. How the EcoBoost manages to do so is with the help of a turbocharger. Now before we get into how the engine actually feels like driving, it is important to mention that ford has actually gone the distance and given the engine a new 6-speed manual (thankfully) gearbox too. Start the engine and you get one of the smoothest three-cylinder engine starts (they tend to be juddery). We drove the car mostly on straight highway roads with a few corners in it and the engine was nothing short of impressive. The power delivery is smooth and linear all the way up to the redline and feels punchy and progressive as well. It is refined, so much so, that if you don’t tell the driver that it is a 999cc three-cylinder engine, chances are they won’t be able to make that out. Another aspect that they won’t be able to make out is that the engine has a turbocharger in it as it does not kick in the way one would usually expect it to. It does not serve a wallop of power in one go once you reach a particular RPM which would lie so higher up in the RPM range that below it, the engine just feels out of breath. In the case of the Ford EcoSport, the turbo is said to have been tuned to kick in early in the RPM range and it is a smooth transition to a linearly increasing torque delivery.

The gearbox that comes with it does take a little effort when you want to upshift or downshift quickly, but that is also something that some people may like. It slots in crisply and there’s no head-bobbing whatsoever. Accompanying the drivetrain is the suspension setup which is a bit on the stiffer side. While this makes for a great high-speed driving experience, it does make for bumpy rides through bad patches of road. The EcoSport S also gets lower profile (205/50) radial tyres which provide great feedback and are also not very loud at high speeds. Speaking of sound, the engine has a very peculiar note to it. It sounds good, yes, but we wish the exhaust note was a bit louder because of one particular reason – the turbo’s blow-off valve noise when you upshift at higher RPMs.

And let’s not forget, other than all these features, the EcoSport carries over all the good bits that it comes within other variants. This includes features like cruise control, six airbags, traction control, push-start/stop engine button, rain-sensing wipers, ambient lighting system and an 8-inch touchscreen infotainment system which is simply the best in the segment. It comes with Ford Sync 3.0 UI which is simple and easy to use, supports Android Auto and Apple CarPlay and has one of the best touch responses in the segment.

But the touchscreen unit in the EcoSport S is 8-inches in size whereas the lower variants of the car come with a 9-inch touchscreen infotainment unit – something we wished the EcoSport S also got. Another thing that we were left wishing for was rear AC vents for the rear passenger. It is nitpicking, yes, but that would have made the car complete. Last but not the least, we wish the engine had a proper cover on it, with things like ‘EcoBoost’ written in a big, red font. At its current state, it just feels incomplete.


Overall, the Ford EcoSport has been known for being an option which is meant for those looking for a car with a great driving experience. The EcoSport S aims to build upon that and it comes with all the right tools to be the rightful holder of that title. Not only does it get an impressive drivetrain it also brings along with itself a host of features and styling elements which make it stand out. So, if you are in the market looking for a compact SUV with a peppy driving performance, the Ford EcoSport should be right there at the top of your list.
Manav Sinha