Siddhartha Sharma
Ford India is all geared up to introduce a new segment to the car market and they plan to go all Freestyle about it. Meet the all-new Ford Freestyle that’s all set to hit the Indian roads in April 2018. The bookings for the new CUV (Compact Utility Vehicle) is set to start from April 7 across all the Ford Dealers in the country. And before the car hits the Indian market, we were invited to drive this car in Rajasthan’s famous Sambhar Salt Lake Flats. So what do we think of the all-new Ford Freestyle, let's find out in our first drive review.

According to Ford this is an all new segment of compact utility vehicle. Now this is not an SUV or a Cross variant as we’ve seen in the past with other manufacturers but a class of vehicle that sits between the Ford Figo and the EcoSport. What we think is that it’s a buffed up hatchback with extra capabilities that a consumer won’t mind at all. In terms of the looks, it looks chunky and muscular at the right places. It definitely has a better road presence than the Figo and to be really honest here, Figo should have been Freestyle in the first place. The overall proportions of the Freestyle are balanced and the Car does not look odd from any angle. The roof rails add that utility factor to the Freestyle and this SUV like vehicle is something that showcases the progressive approach of Ford as a company in India. Also in our opinion, it looks way better than a confused segment car from Honda called W-RV.

The new Ford Freestyle that we drove for this review came with a 1.2-litre petrol motor that produces 96PS of peak power and 120NM of torque. Ford will introduce a diesel variant as well that will sport the same engine that Ford uses in Aspire, Figo and EcoSport. Talking about the engine, the Freestyle offers something that’s hardly seen in many hatchback options out there, like the Hyundai Elite i20, Maruti Suzuki Baleno. While the one on Hyundai is made for linear power delivery, the Maruti Engine is full of fuel efficiency. Ford on the other hand have done something bold. The petrol motor on the Freestyle is a new 1.2 litre petrol engine from the dragon series that’s a balanced one when it comes to power as well as fuel efficient. It knows how to walk that thin line of performance and economy.

To drive the Freestyle is a delight and the overall ride quality for the diver and passenger is something that gives you a feeling of sitting in a higher segment car than what the Freestyle sits in. The new drivetrain is mated with a new 5-speed manual transmission that’s really peppy and would urge you to shift gears very often because of the way it throws. Also, things like Active Rollover Prevention would never make the car go turtle if you plan to take a high speed turn. Now that makes it one of the safest cars in this price point. Overall, we were quite happy with what Ford has done with the new Freestyle. The 15-inch tyres also help in keeping the Freestyle planted to the road and ensure confidence at high speeds.

The NVH levels are also less, when you compare it with the likes of the Honda W-RV. The suspension is also well tuned and it also offers an increased track width. Features like TVS, ABS with EBD, Hill Hold Assist and a uniquely Tuned EPAS are like the cherry on top of this cake of a car. Not to forget 190 mm of ground clearance for our amazing Indian roads is a bonus. With things like a 190mm ground clearance and first in segment features like Active Rollover prevention and Hill Launch assist the Freestyle is a Car for people who want way more than just fuel economy from a car. And yes fuel efficiency is also something that it offers. The petrol variant that we drove returned us an efficiency of 16 km/l which included us going all Mad Max with it as well.

We expected an EcoSport like cabin and that’s what in a way we got. The interiors of the new Ford Freestyle are really done well, the two tone dash design really works for the differentiation from other Ford cars that are offered in India. The seats are also well designed but could have been done a little better with slightly hard cushioning as it’s towards the softer side. You also get 20 storage compartments inside the cabin. 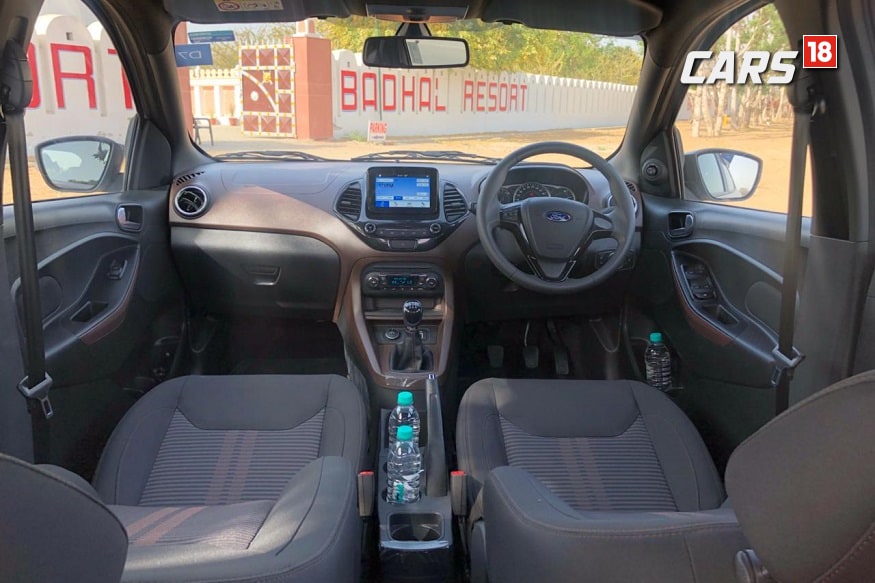 What’s of a particular interest to us was the 6.5 inch touchscreen infotainment display. It’s just what every touchscreen display inside a car should be, Period! The SYNC 3 along with Apple CarPlay and Android Auto makes it relevant in today’s day and age. And the music quality inside the cabin is also quite good and offers a decent thump. Ford has also done the piano black finish on the central console intelligently on the Freestyle.

It has a shimmer to it that makes fingerprint smudges almost invisible and gives a clean appearance all the time. What we didn’t like was the hat rack on the car, somehow the fit and finish of that is not convincing enough and it tends to pop out. Apart from that Ford has made the Freestyle a very practical vehicle. The Ford Freestyle is a new segment, but a segment that could be an endgame for cars with no proper segment classification like the Honda W-RV, Volkswagen Polo Cross and Toyota Etios Cross. It’s a car that will definitely fight with the W-RV and the Hyundai Elite i20 Active for the top listing and it is also a capable one to earn that. Of course price is something which will be the deterrent in scripting the success of the Freestyle for Ford. This car is something that you should definitely wait for, if you are looking to buy a car in a price segment of Rs 7-11 Lakh.