The McLaren 720S by MSO combines the Atlantic Blue paint finish specially formulated for the car with a classic Saddle Tan leather interior.

After an award-filled year on its world premiere at the 87th Geneva International Motor Show, the McLaren 720S is again taking the Geneva spotlight with a breathtaking-in-blue bespoke creation from McLaren Special Operations (MSO). The McLaren 720S by MSO combines the Atlantic Blue paint finish specially formulated for the car with a classic Saddle Tan leather interior. Providing the most focused driving experience thanks to innovations in aerodynamics, proactive suspension control, carbon-fibre construction and one of the world’s most potent 4.0-litre twin-turbocharged V8 engines, the 720PS (710bhp) 720S can deliver a top speed of 212mph and dispatch 0-62mph in 2.9 seconds.

None of this is at the expense of comfort: heated electric seats, keyless entry, soft-close doors, cruise control, electrically adjustable steering column and advanced climate and connectivity systems are among the standard features.

Setting off the Atlantic Blue paint are Dark Palladium exterior finishes, gloss finish Visual Carbon Fibre, and Zircon window surrounds. The stainless-steel sports exhaust has Titanium finishers and the twin-spoke lightweight wheels feature a bespoke Graphite Grey finish. The brakes – as on all McLaren 720Ss – are carbon-ceramic and for this special model feature black calipers with McLaren branding. 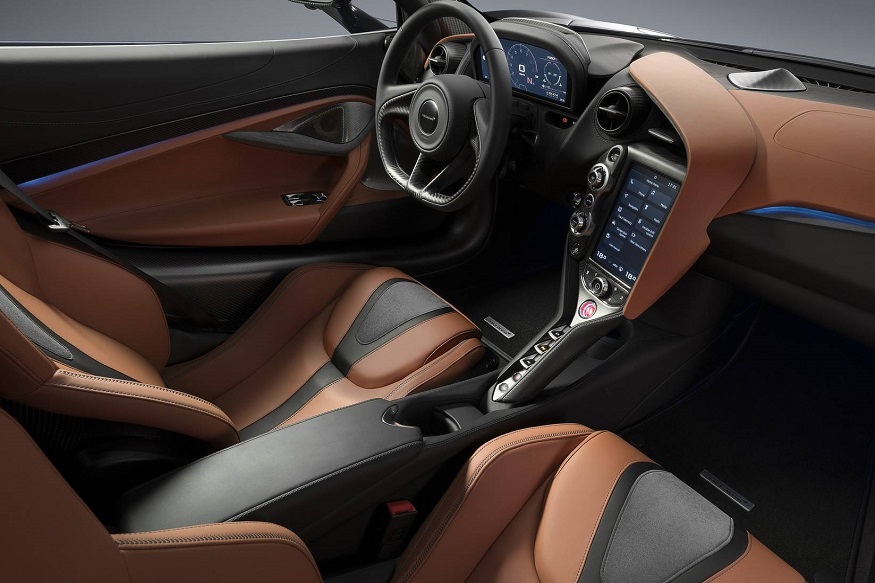 MSO Defined features inside the cockpit characterise the demands of a typical McLaren 720S owner, with priorities for both track driving and everyday usability. The McLaren 720S in Atlantic Blue by MSO comes with both the McLaren Track Telemetry and camera system for circuit enjoyment and a 360-degree Park Assist system of sensors and cameras to ease city driving.

The car is also equipped with a vehicle lift to avoid damage over ramps and speed humps, and to while away motorway miles there is a Bowers & Wilkins 12-speaker audio system. This unique McLaren 720S in Atlantic Blue by MSO carries a price tag of £281,260.