Anirudh SK
With electricity becoming the new buzz word in the automotive industry, automakers are gathering their cavalry to be the first in the game. While the future of electrified passenger vehicles sure looks bright, a rather untouched segment is the commercial space.

Trucks are guzzling ever more diesel, polluting towns and cities, fueling climate change. And while a majority of the global landscape conveniently brushes it under the rug, Germany might have a potent solution. The answer is a bunch of overhead cables that can be used to power big rigs. Trucks on the eHighway. (Source: Siemens)

The proposed system allows trucks to draw electric power from the overhead cables. It was deployed on a 10km stretch of the Autobahn on Tuesday, the German government said. Developed by Siemens (SIEGY), the new tech includes special equipment mounted on the roofs of the trucks that will connect to the electric lines while travelling at speeds of up to 90 kph.

Apart from sharply reducing the emission of Co2 and nitrogen oxides, Siemens suggests that its eHighway system combines the efficiency of an electric rail with the flexibility of trucking. The trucks run on electric motors when connected to the overhead wires and on hybrid systems when back on the traditional road. The company suggested that the system can be integrated with existing road infrastructure, accounting to practicality while reducing emissions and energy consumption in places where railways aren’t feasible. 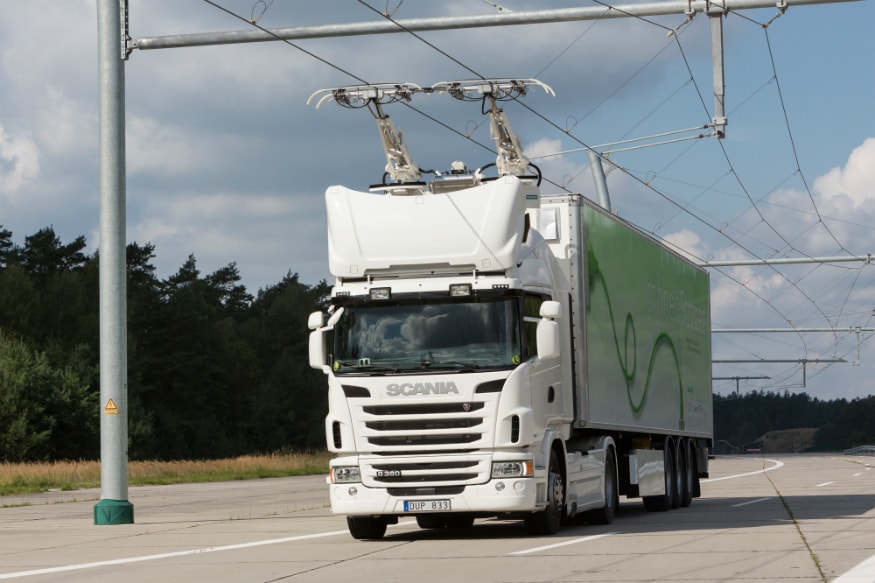 Trucks on the eHighway. (Source: Siemens)

The German government has spent close to $77 million towards the project to develop the trucks. According to Siemens, a driver can easily save $22,730 on fuel over 100,000 kilometres. Globally, cutting down the carbon emissions from transportation including freight is a key part of the 2015 Paris Climate agreement. This aims at limiting global warming to well below 2 degrees Celsius above pre-industrial levels.

"Electrified trucks are particularly efficient solution on the road to carbon-neutral transportation," said Rita Schwarzelühr-Sutter, state secretary at the German Federal Ministry for the Environment.
Tags