Goodbye Suzuki Hayabusa; Here's Why the Dhoom Bike is so Iconic in India

It has been 21 years since the Suzuki Hayabusa took form but even today, there are several motorcycling enthusiasts not only in India but all over the world, that swear by the fact that the Hayabusa is the best motorcycle money can buy.

The Suzuki Hayabusa has been a legend, a proper icon of its time and that's not only in India but worldwide. And the reasons are many for that. But why are we talking about the Suzuki Hayabusa now? Well, the last of the Suzuki Hayabusas available in India have been sold out and this means a lot more than you think. That's because India was one of the last countries where the Hayabusa was still on sale since it was meeting the BS-IV emission norm. It was no longer on sale in other parts of the world as those countries had moved on to a higher, stricter Euro V emission norm. And since, from April 1, India is moving to an even higher emission norm, BS-VI, that means the 'Busa can no longer be sold in our country. And even before the first of next month is here, the India stocks have bee sold out. So all in all, it is time to say goodbye to the Suzuki Hayabusa.

However, if like us, you have wondered what makes the Suzuki Hayabusa so popular (other than the fact that it was in the Bollywood movie Dhoom), well, we have the answer for you.

Twenty-one years. That is how long it has been since the Suzuki Hayabusa came about. And the moment it did, it bagged the title of being the fastest production motorcycle in the world. That’s not it since it came out in 1999, it also became the fastest production motorcycle of the twentieth century. Two decades later, the Suzuki Hayabusa is now a legend and an icon amongst every motorcycling enthusiast all across the world. But when it comes to the present and given the new crop of motorcycles that have emerged over the years, does it make sense to buy a Hayabusa in this day and age? And also, what makes this motorcycle so popular across the world? Well today, we are going to find out.

Let’s start with what makes this motorcycle such a legend and for that, we need to go back in time.

You see, in the 1990s, the race between manufacturers was to have the fastest production motorcycle in terms of pure top speed. The year is 1997 and Honda motorcycles have just bagged this title with their own hyperbike called as the Super Blackbird, a nod to the nickname of Lockheed SR-71 which, in 1976, bagged the title of having the fastest airspeed record achieving 3,529 km/h – a record that stands even today. The Honda Super Blackbird then was supposed to be the almighty record holder when it came to motorcycles. But, that was not to because come 1999, Suzuki was to come out with their biggest displacement motorcycle ever, called as the GSX1300R, or simply – Hayabusa.

The word ‘Hayabusa’ is Japanese for the Peregrine Falcon which is the fastest member of the animal kingdom. The bird-eating raptor achieves this feat while diving vertically on its prey – which is the Blackbird.

Suzuki’s intent was simple. Dethrone the Honda Blackbird and settle the speed wars once and for all. And, that’s exactly what the Suzuki Hayabusa did – by going about 25 km/h faster than the Blackbird, achieving a top speed of 312 km/h – and no production motorcycle has broken the top speed record by such a huge margin, ever.

Without a doubt, the Suzuki Hayabusa blew everyone’s mind and got everyone’s attention. Reasons included everything from its top speed to the unconventional shape that it had. It got people talking. The Suzuki Hayabusa was designed in a wind tunnel. (Photo: News18.com)

So much so, that it started talks of regulating top speeds in motorcycles all across the world with people fearing that the speed wars are getting out of control. This almost led to the import hyperbikes being banned in Europe, and in response to all this, all Japanese and European motorcycle manufacturers came together and had a gentlemen’s agreement that no motorcycle that they will make from now on will ever exceed the speed of 186 mph, or 299 km/h – something that stands even today. As a result, from the year 2000, every motorcycle ever made could not go past 299 km/h unless tampered with. Hence, it can be argued that the Hayabusa is still the fastest production motorcycle ever made and will quite possibly remain so for years to come.

So yes, that is the reason why the Suzuki Hayabusa is so popular all across the world. But let’s put aside all of that heritage and let’s look at the motorcycle as just a motorcycle. Well, the last major update that the Hayabusa received was way back in 2008 wherein the motorcycle was given minor updates in terms of looks and some big technical updates. And to be honest, I thought that the motorcycle is now old and wouldn’t be that much of a surprise and boy was I wrong! The Hayabusa still packs the punch to put almost all modern superbikes to shame if it wants to. The Suzuki Hayabusa has one of the most iconic silhouettes of all time. (Photo: News18.com)

But let’s start off with the looks. Yes, it might have been unconventional when it came out but today, this is an iconic shape. A silhouette that is instantly recognizable all over the world. The design of the motorcycle looks like this majorly because there was no other way back then to make it go faster if it wasn’t for this curvaceous shape and as a result, the design took form in a wind tunnel.

And because it is now so iconic, the Hayabusa doesn’t seem to have aged even a bit!

The only give-away is the instrument cluster that looks a bit dated but still, nothing can beat the old-world charm of several analogue dials in front of you. The Suzuki Hayabusa gets an analogue instrument cluster. (Photo: News18.com)

When it comes to the riding part, well, its biggest strong point is – you guessed it – that engine. The 1340cc four-cylinder liquid-cooled unit makes an astonishing 199 hp and 115 Nm of torque and comes with a 6-speed transmission that’s butter smooth to operate. And while there is no fancy electronic like a lean-sensitive quickshifter or auto blipper or whatever, the joy of matching your revs for downshifting and getting it right – is well something you would be proud of for years to come.

As for the electronics, there’s only the choice of engine mappings to choose from and well, ABS… and… that’s about it. And because of that, the rider feels almost everything that the motorcycle feels as there is no electronic safety net that filters it out and if you know what you’re doing, you’ll love this motorcycle for it. The Suzuki Hayabusa is the definitive sports-tourer. (Photo: News18.com)

Then, there’s the size. The Hayabusa is huge by modern-day standards with a wheelbase the size of motorcycles, means two things. First, it feels a bit cumbersome at low speeds – there is no denying that. But then, given its size, there’s ample room for the rider on the motorcycle and the riding posture is luxurious by modern-day standards. There’s even a proper pillion seat where people can actually sit for hours. The Suzuki Hayabusa, despite being a superbike, does get a very practical pillion seat. (Photo: News18.com)

And then, there’s the stability. The motorcycle feels amazingly stable at highway speeds and with the comfort that it offers – this is a definitive sports tourer.

And let’s not forget, the Hayabusa, with all its glory, heritage, performance and practicality – it cost Rs 13.74 lakh (ex-showroom) making it one of the most accessible litre-class motorcycles, and above, in India.

But then again, it has been 21 years now. The death knell for the Hayabusa has been rung and the motorcycle is gone. 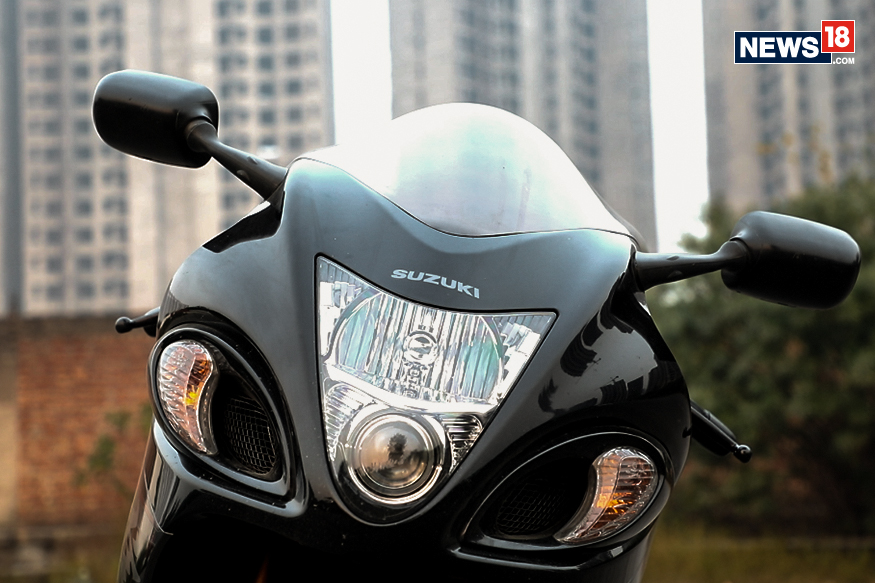 The Suzuki Hayabusa is still on sale in India. (Photo: News18.com)

Thankfully, there is still some hope as Suzuki has renewed the trademark on the Hayabusa name and is rumoured to be working on a new motorcycle that will replace this model. Will it be electric? Will it be turbocharged? Well, we don’t know. But as for the legend of the Hayabusa, it will go on forever. The Suzuki Hayabusa is an iconic motorcycle in every sense. (Photo: News18.com)