The Harley-Davidson Road Glide promises to be one of the best luxury cruisers on sale in India right now. We find out what makes it so special.

Manav Sinha
Now when it comes to hopping on to your motorcycle and riding on to the open highways, chasing the sunset and the whole idea of luxury motorcycle touring, then probably the first brand name that comes to your mind is Harley-Davidson. And that's for good reason because they are responsible for making bikes like these - the Harley Davidson Road Glide - and we are here to find out what makes it so special.


Well, right away, the very first thing and arguably the most attractive feature of the Road Glide has to be that styling. If you are thinking of spending the amount of money that the motorcycle comes at, then you would want to stand out of the crowd and the boy does the road glide does it well. The motorcycle is simply huge with the total length spanning to almost eight feet! But once you get close to the bike then you will notice the level of finishing and detailing which is just fantastic. Case in point would be the rims, the cleverly hidden fuel cap and the plastic quality on the cockpit. There’s ample chrome all over the bike and the unit we tested came with the screaming eagle exhausts which sound oh so good. From the back, the motorcycle’s silhouette swoops down and out making it look even bigger and the stretched saddlebags help. There’s enough storage capacity in them and there are two cubby holes in the cockpit which could come in handy to keep your knick knacks and also have a USB port inside them to charge your smartphone. But let’s not beat around the bush, the star attraction is that front fairing and Harley-Davidson calls it the Batwing. 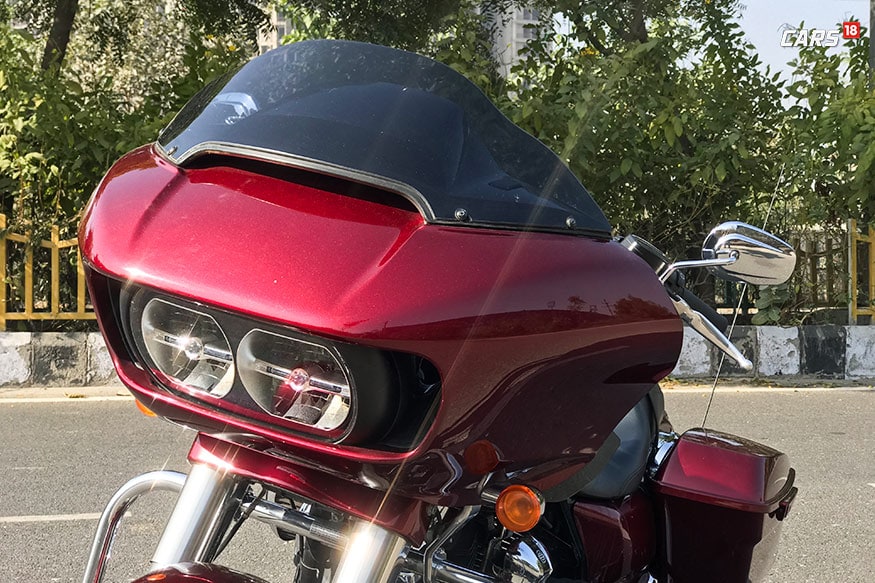 Well, with the name out of the way, the fairing’s design is definitely different and while looks are subjective, the fairing actually looks way better when you see it in person. It’s purposeful as well as it does a brilliant job at deflecting winds even at high speeds and when seated on the bike, it manages to create a sense of the big bike feel. It houses two large speakers which are louder than you would wish for and it also houses a 6.5-inch colour touchscreen infotainment system. It supports SD Card and Bluetooth and comes with features like Radio and navigation. It has good visibility even in direct sunlight and registers input with ease even when you are wearing gloves. Then, there’s the analogue instrument cluster which is easy to read and overall, the Road glide showcases all the information you would need to know. But, the menu layout does take some to time to get used to and the two joysticks on the handlebar clusters make it a little bit confusing for those using this system for the first time. Now, when it comes to riding comfort then this one is as comfortable as sitting on a couch even if you are going at a speed of 120 km/h and there are only two words to describe that - riding ergonomics.

The seat height on this one will make it easy for riders of all height to be comfortable and the footpegs are positioned just right both front and back. The footboard is also large enough and not there just for the sake of it, and, the handlebar rises and high and towards the rider making it one of the most comfortable motorcycles out there right now. It is powered by a 1745 CC V-twin engine that has enough power and torque no matter which gear you are in. Speaking of gears, the engine comes with a six-speed transmission whose gear ratios never gave us a chance to complain and was smooth to operate. The engine’s refinement cannot be praised enough and Harley has kept subtle vibrations at the lower end of the RPM band and that is something we liked. This, coupled with the beefy front suspension and the adjustable rear shocks make for a sublime ride quality with the bike absorbing almost all bumps that come its way. When it comes to sharp bumps at higher speeds, though, you’ll have to go over them with some delicacy as the bike transfers all of it to the rider. The biggest sore point of such bikes, though, pretty much always, is the heat management. To tackle that, the updated Road Glide does come with a small radiator at the front and Harley claims that they’ve reworked the tidbits in the drivetrain for better heat dissipation and it works. The bike managed heat fairly well unless you are stuck in a traffic jam. But then, that’s not where you are supposed to take this bike anyways.

Well, to sum up, a motorcycle like this is no easy task because frankly, this is a lot of motorcycle as you can see. But what Harley-Davidson has managed to do is successfully encapsulate the most basic and the most necessary part of a motorcycle which is - character. is it worth your money? Well, that depends on two things - your bank balance and your passion for motorcycling. if you have plenty of both, then this is as good as it gets.