The Hero Xtreme 200R is Hero MotoCorp's first 200cc motorcycle and it gets the basics right, But does it stand a chance against the likes of the TVS Apache RTR 200 4V and Bajaj NS200?

Manav Sinha
There is an evident shift towards higher capacity motorcycles as more and more people are warming up to the idea of owning a motorcycle in the 150cc-250cc segment. Owing to this trend, almost every two-wheeler manufacturer wants to get a share of the pie and now there are more options available in this segment than ever. Hero MotoCorp is perhaps one of the last players to enter this game and they have taken their own sweet time to give it their best. Their offering is the Xtreme 200R which was first showcased as a concept at the 2016 Delhi Auto Expo, then showcased it in the production-ready avatar in January 2018 and even today it is still a few weeks away from its commercial launch. But for that, they called us over to sample the machine and, rather surprisingly, the venue was the Buddh International Circuit. Yes, that’s a Formula 1 track which can be rather overwhelming for a 200cc motorcycle but Hero MotoCorp seemed confident of their product. Here’s how it went.


Let’s start with the styling. Now Hero seems to have covered the basics and given the Xtreme 200R the features you would expect from a motorcycle in this segment which claims to be sporty and aggressive. There is a stubby exhaust, an underbelly cover, blacked-out alloy wheels and a sharply chiselled fuel tank which give the motorcycle a muscular feel. Hero Xtreme 200R from the back. (Photo: Hero MotoCorp)

It also comes with some bold body graphics both on the fuel tank as well as the rear panel, a chunky fuel tank pad and also sports the familiar LED tail light that you have seen on the Xtreme 150 which does look really good especially when you see it in person. Now looks are subjective, but for us, we wished the headlamp unit was a bit more stand-out and placed a bit lower which would have made the motorcycle look a lot sportier. Other than that, overall, the motorcycle looks familiar but also feels a bit different. Hero Xtreme 200R has one of the best-looking tail lights in the segment. (Photo: Hero MotoCorp)

Now there are some elements which will help Hero price the Xtreme 200R aggressively, like the headlamp which is not an LED unit and the instrument cluster which is a combination of digital and analogue readout and not a complete digital unit. However, the cluster is fairly easy to read and also informative. But hey, this was about riding the Xtreme 200R on a race track so let’s get to it.

The Xtreme 200 is powered by an air-cooled 200cc engine delivering 18.4 PS of power and 17.1 Nm of torque and comes with a 5-speed transmission. Now if you were to go by these numbers alone, the Xtreme 200 is not the most powerful 200cc options in the market but how it makes up is with other elements that complement the ride. First up, are the brakes which comprise of the front and rear disc brakes which provide good feedback and bite. 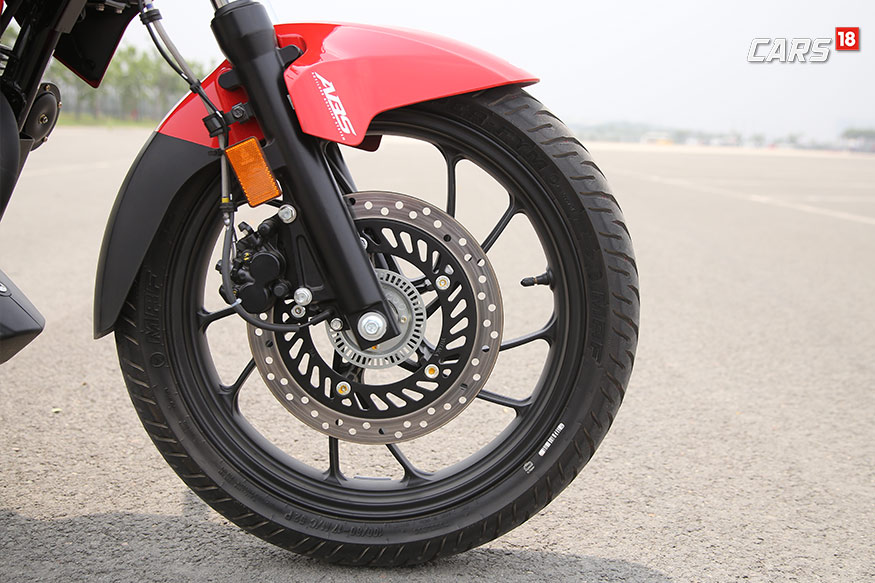 But the best part is that no matter how hard you push the motorcycle, it does not feel out of its comfort zone. A large factor for that is the chassis feedback, the beefy front suspension and the 7-stage adjustable rear monoshock. On top of that, the Xtreme has a wide 130 section rear tyre and when you combine all of these factors together, the Xtreme 200R is a rather fun motorcycle to throw around. There are a few vibrations on the footpegs and the handlebar past 6000 RPM but they are mild enough to not be complained about.

But here’s the thing, the Xtreme 200R is not an all-out apex-hunting track machine. What it is, perhaps, a sporty commuter which won’t let you down in everyday riding conditions. And given the way Hero prices their motorcycles, the Xtreme 200 would make a good case for those looking to upgrade from a 100-125cc motorcycle and are not all that into performance. So to wrap up the whole experience, the Hero Xtreme 200R has been a rather surprising motorcycle and that too in a very positive manner. This one impresses us with its performance and the company says that this one will be priced aggressively as well. If that is the case, you can simply can't miss out on the Xtreme 200R.
Manav Sinha