The Honda Activa 6G is greener, better and a big leap from its predecessors. But by what measure? Find out.

The Acitva badge since the last several years has been synonymous with trust and reliability and these are not out words rather than what the sales have spoken. The Activa is a cash cow for Honda, and hence, the most important product in their lineup. So in its sixth generation, the scooter arrives with a host of changes both in terms of features and mechanicals. So without further adieu, here's what it's all about.

So before we get into the riding bit, let's just quickly go through everything that the extra G gets you. Honda says that the 6th gen is an all-new Activa down to its chassis. It gets telescopic suspension and finally comes with a 12-inch wheel at the front. However, Honda is only offering the scooter with drum brakes. Also new is an external fuel cap which is a first in the Activa series. The new platform provides a longer wheelbase which has helped extend the footboard providing more leg-room. Minor tweaks on the outside come in the form of newly designed chrome accents on the front apron. The new-gen Activa gets sleeker headlamp that is available in both halogen as well as LED units and this is essentially the only difference between the standard and deluxe variants of the scooter.

At the rear, the design closely resembles with the Activa 125 thanks to the similar-looking taillights, however, it won't take long for one to realise that this is indeed the smaller one of the two, mainly due to the grabrail. Coming on to the riding, the longer wheelbase has helped the new Activa be more stable and planted during turns and inspires more confidence to carry more speed. This along with the new 12-inch front wheel and telescopic suspension that have improved the riding dynamics by a huge margin. And before I forget, Activa lovers won't be disappointed this time either as this one gets a metal body too. 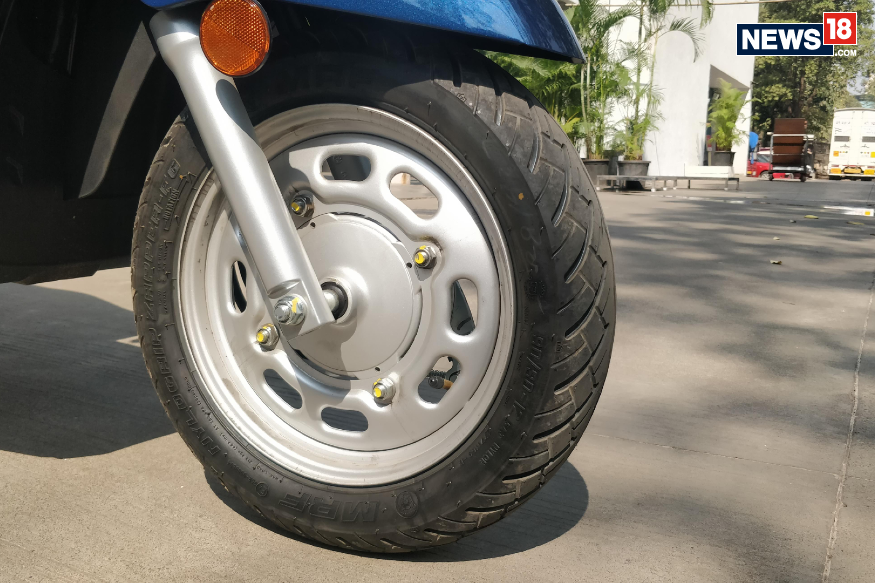 The Honda Activa now gets telescopic suspension and a 12-inch wheel at the front. (Image: Anirudh Sunil Kumar/News18.com)

At the heart of it, the Activa is still powered by the same 110-cc engine that now comes with fuel injection. However, the resulting extra refinement comes at a cost of lesser output. So, while the fuel injection has substantially helped with the ride quality, the scooter slacks a bit when it comes to performance.

The new telescopic suspension is a laudable improvement over the previous generation's conventional ones and does a good job in absorbing most undulations on the road. Now, as we mentioned before, Honda is only offering the scooter with drum brakes on both variants, which we wished included an option for disc too. So to sum it up, if you were to ask if the 6G is still an Activa in spite of all the BS-VI changes. I would very much say yes. All the changes have led to a price hike of almost Rs 7000 to 8000 which is majorly due to the addition of fuel injection and is pretty reasonable. The engine is much more refined and has what it takes to retain its current position in the segment.