The Honda Africa Twin has history, legacy and a reputation that precedes it. We find out how it fares.

‘Adventure-Touring’ and ‘Adventure-Sports’ – both of these segments are pretty much self-explanatory and if you wanted to do a bit of both, then there are only a handful of motorcycles in the world that your choices will come down to. One of them is the Honda Africa Twin which promises to be the best value for money offering to suit that requirement. We got a chance to test out one of the first Africa Twins that made their way to India. Here’s what we found out.

The Honda Africa Twin actually manages to conceal its size really well and you won't be blamed for thinking of it as a 600cc or 750cc motorcycle at first glance. And, it is this very ability to conceal its size that goes a long way in establishing a friendly first impression in the mind of the rider instead of an intimidating one which usually other ADVs do.

The LED headlamps look sleek and strike a resemblance to the original XRV650 Africa Twin which was made by Honda way back in 1988. When you look at it from the sides, you will notice how minimalistic the approach to design is and the Twin looks good even from the back, despite carrying a huge exhaust and a saree guard. Overall, the bike’s design shows a clear intent of practicality over everything else. The colour scheme of black, white and red makes it stand out of the crowd and looks great.

It has a seat height of the Africa Twin is 840mm. While this may seem a bit on the higher side, it can be adjusted and the seat height can be dropped by 20mm which could come as some respite to shorter riders. Once you hop onto it, it is then that you realise that the bike is a litre-class ADV but even then it is not intimidating.

The fuel tank capacity is 18.8 litres, which is actually quite big, but the tank is shaped in such a way that you can rest your knees comfortably even while sitting on the bike or while standing on the foot pegs. While you need to reach out a little bit in order to have a good hold on the handlebar, it is very conveniently placed when you are standing on the foot pegs. The stock wind deflector also does a brilliant job in preventing wind blasts at highway speeds. 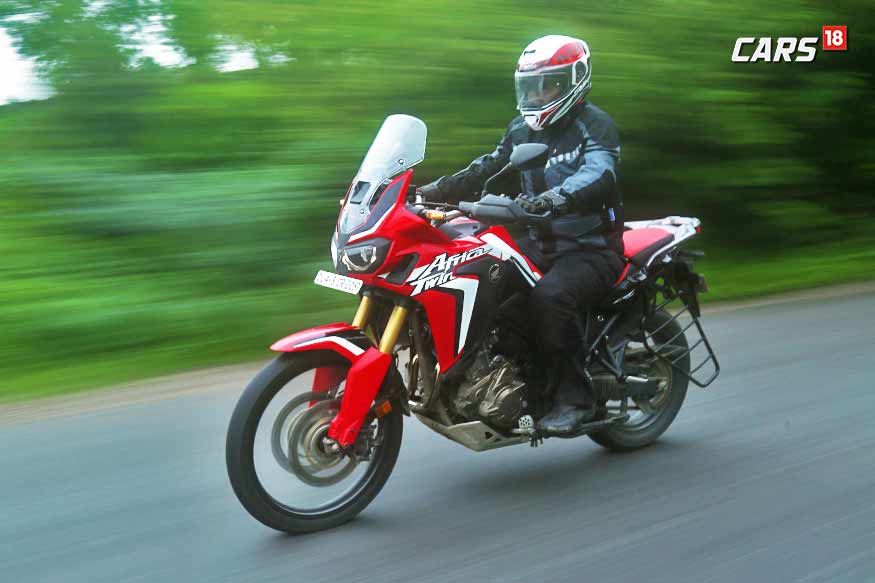 All of this translates into a very comfortable riding position, one of the most comfortable ones in the segment. Add to that the brilliance of the chassis, which is actually focused on off-roading, and you have a machine that handles very well on the twisty roads and is easy to manoeuvre in city traffic. The 250mm ground clearance and the large 21-inch front wheel gives you the confidence of taking the bike anywhere and everywhere.

The best part about the Twin is the parallel twin 999cc liquid cooled engine on board. The power output of 87 horsepower and torque of 91.9 Nm is decent, at best, but you will never complain because the way this power and torque is delivered is simply fantastic. There is no noticeable vibration on the handlebar, foot pegs or anywhere else even at high RPMs and the power is delivered in a very linear fashion – a level of refinement typical of Hondas.

Let’s not forget, there are also several ways to customise the riding experience as per the rider’s requirement thanks to the wide array of electronic rider aids that come on board. There are three levels of traction control and yes you can turn it off as well. There are several riding modes as well, as you can choose from the regular ‘D’ mode meant for cruising and light riding followed by three stages of 'S' mode – S1, S2 and S3 – with S3 being the most aggressive one and S1 being the least. These riding modes alter the gear ratios which, in turn, allows the rider to alter the behaviour of the bike to quite an extent. Although, we felt that the regular ‘D’ mode really constricts the motorcycle and as a result, we left the bike mostly in ‘S2’ mode. There's also the 'G' switch next to the instrument cluster which makes for a more direct and quick throttle response and gives the half-clutch riding experience at steep inclines. Interestingly, all these can be altered on the fly and that’s really commendable. There's ABS on offer too and it can be switched off as well, but only for the rear wheel in order to allow for some wheel spin (it can be useful in extreme terrains) and letting the tail out when you want to (which can be really, really fun). The biggest differentiating factor on the Africa Twin is the transmission. In India, there is only the DCT or Dual clutch transmission version available. What this basically means, is that the Twin rides like an automatic as it is the onboard computer that shifts all the gears for you based on your selected riding mode. In place of the clutch lever, you have an e-brake and there’s no gear lever either. Thankfully, you can switch to manual mode and choose to shift when you like. But since there is no gear lever, you have to do it from the paddle shifters with your left hand that is placed on the left side instrument console, something like what the modern day sports cars have.

Honestly, we had our share of concerns on how does one adapt to the way the bike wants to shift or how does the bike adapt to the way the rider prefers it to shift. During the first few kilometres, it was a bit absurd having nothing under your left foot (no gear lever, remember?) and the fact that you have to make sure you don’t grab the e-brake by mistake which is where the clutch lever usually is. And on top of that, having to shift gears with your hand. But once we got used to it and actually trusted the motorcycle with the riding modes and gear shifts and finding and understanding the riding modes, it was a treat to ride. Let me put it this way, not worrying about the clutch or shifting during off-roading is nothing short of a bliss and that you can’t stall the bike at low speeds, well, that’s just the cherry on top.

But then there were a few things that we wished were a bit better. Like, there's minimal plastic protection for the radiator which is concerning. These bikes tend to drop and if that happens on a hard surface, like a rock, then you’ll be leaking coolant everywhere.

On top of that, the instrument cluster lacks good visibility and is quite reflective making it tricky to see and register all the data on it in direct sunlight. Also, keep in mind that the tyres that come with the Twin are more road focused so if you have off-roading in mind, then you will have to get a set of chunkier tyres. This isn’t exactly a negative but things like the tyres and crash protection are things you will be spending on and hence, needs to be pointed out.

The Honda Africa Twin goes up against the likes of the Triumph Tiger and the Ducati Multistrada 950.

So at the end of the day, the Africa Twin turned out to be an absolute charm to ride. It is one of those motorcycles in which if you nitpick the negatives, you have a bit of a guilt feeling simply because of the ride experience the bike is offering. There’s a smooth, refined engine on board and you don’t have to worry about gear shifts. The ride position is comfortable and it’s easy to manoeuvre. Add to that the off-road capabilities that the Africa Twin has and you have a motorcycle that you won’t think twice before riding for 1000 kilometres.

And when you get yourself to trust the machine and get used to the way it behaves, you’ll be left with giggles inside your helmet every time you slide the tail and gain more and more confidence over the course of your ride. This is a big win in our books and is a bike that every rider needs to have a go at before making up their mind on even ADV offerings in segments above.

So, at a price tag of Rs 13.06 lakh (ex-showroom, Delhi) the Honda Africa Twin lives up to the reputation that precedes it and is really the only motorcycle you really need in your garage.