We drove the Honda BR-V for more than 4000 km over a period of 4 months, to understand if the MPV still makes a sense in such a competitive environment.

The Honda BR-V is only among a few available value-for-money MPVs in India, a segment yet to get its due credit in India. While Honda BR-V offers a unique mix of design of an SUV and space of an MPV, the car has faced some stiff competition in the recent years from the growing demand for feature-rich vehicles, which Honda couldn’t cope up with. That being said, we drove the MPV for more than 4000 km over a period of 4 months, to understand if the Honda BR-V still makes a sense in such a competitive environment. The Honda BR-V has a bold front fascia that’s akin to the WR-V compact SUV, making it look like a compact SUV from the front. It sports angular headlamps with a large chrome grille and chrome inserts on the fog lamps that give the car an aggressive stance. The tail lamps are connected by a continuous reflector strip running across the width. The BR-V also has a massive ground clearance (210 mm), more than most of the other Compact SUVs.

The side profile reminds you of Mobilio, thanks to the kinked window line. It wouldn’t be wrong to say that the BR-V marries the design and functionalities of WR-V compact SUV with the practicality of the Mobilio MPV – defining the BR-V characteristics. Once you hop inside the car, the first thing that you’ll notice is the massive glass area offering good visibility, giving the cabin an airy feel. The all-black finish with silver accents adds a sporty character. Being a 7-seater, the rear visibility is not a problem with the BR-V until a passenger decides to sit in the middle of the third row. There are plenty of storage compartments and the plastic quality feels decent. There is a rear AC vent for back row passengers as well.

The instrument cluster is easy to read and also have an ‘Eco’ light that helps you monitor the fuel efficiency. There’s plenty of leg room, shoulder room and headroom for occupants in the front two rows of the car. The second row seats can be reclined or moved as per the comfort. However the third row can get a bit cramped for tall passengers. The access to the last row is convenient, with easy folding second row seats. The cabin has a nice feel to it, but it looks a little bit dated. Probably because most of the cars are now coming touchscreen infotainment system and the BR-V misses out on that. It is also undoubtedly a long car and not having parking sensors could cause trouble. We also missed the centre armrest for the driver and front passenger.

The Honda BR-V is available with a petrol and diesel engine option. The 1.5-litre i-VTEC petrol engine has a power output 117 horsepower and 145 Nm of torque whereas the 1.5-litre i-DTEC diesel engine delivers 98.5 horsepower and 200 Nm of torque. The engines come connected to a 6-speed manual transmission and you can also opt for a CVT transmission, which is only available with the petrol engine, which also comes with steering-mounted paddle shifts. 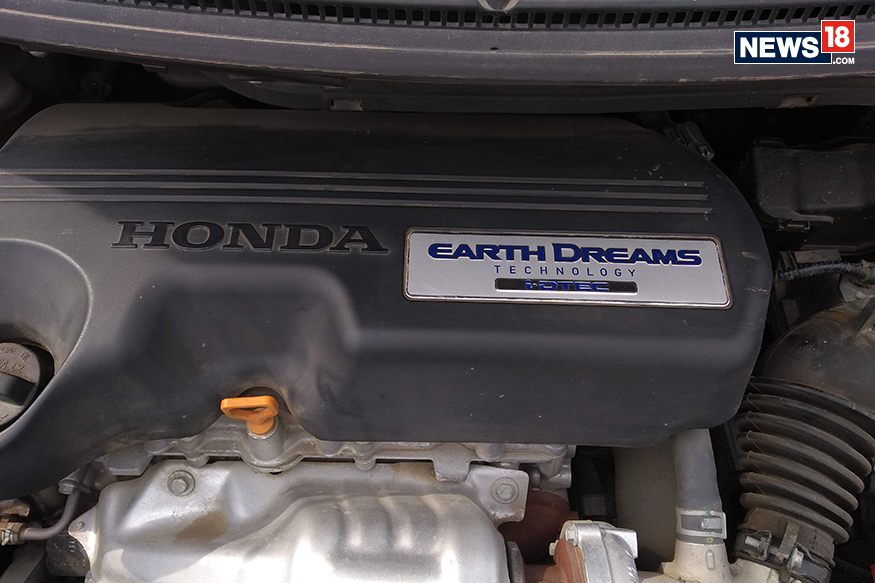 The one we drove was the i-DTEC model with a manual gearbox. While the car didn’t exactly felt keen on pushing hard, it got the job done when we performed quick overtakes in the city and the engine felt refined on highways. The transmission wasn’t the smoothest we have driven from Honda and the engine noise is bit rattling. The steering was not nice to hold either, as we wanted a chunkier wheel for comfortable driving position.

The biggest advantage of the Honda BR-V is the regular 18 kmpl mileage we got throughout our driving period. While Honda claims 21+ kmpl ARAI certified mileage, in real life conditions, getting 18 kmpl is tremendous for a vehicle of this size. The ride quality was on a plush side, with BR-V’s suspension soaking up most of the bumps and rough patches. When we initially started to drive the Honda BR-V, we thought of utilizing the third-row seats to the fullest, however, it hardly came handy for our daily commute or occasional weekend runs, barring a couple of occasions. This highlights the importance of a modular MPV. Having said that, the Honda BR-V delivered on every front it was supposed to deliver – frugal (with over 18kmpl mileage), spacious (with proper space for all seven passengers), practical (with ample stowage spaces) and good looking (with a semi SUV stance). However, the markets globally have evolved tremendously and the BR-V lacks in basic equipment, while the rivals are offering connected technology now. If Honda wants to keep selling the BR-V in India, they better update it as soon as possible, for it is a great product otherwise.