The Hyundai Grand i10 Nios is the latest car to receive the small, turbocharged petrol engine treatment and with that, it becomes one of the best value for money performance hatchbacks in India.

Now if we were to talk about the latest trend in the Indian automotive industry, well, that would be putting small turbocharged petrol engines in new cars. The Hyundai Grand i10 Nios is the latest car to get that option and with that, it promises better value for money than before. But the thing is, it was already a very good package for what it was priced at. So with the addition of this performance, has it become better? Well, here’s all you need to know about it.

The turbocharged Hyundai Grand i10 Nios is available in a single variant option which is priced at Rs 7.68 lakh (ex-showroom). This is the Sportz variant and costs about Rs 1.25 lakh more than the 1.2-litre petrol engine-powered Sportz variant. Now, this price hike does look quite substantial but keep in mind, that the turbo-Sportz variant actually does not directly compare to the regular Sportz variant. I know this is confusing, but this comparison doesn’t work because the turbo-Sportz comes with features like projector headlamps, 15-inch diamond-cut alloy wheels, leather-wrapped steering wheel and the wireless phone charging pad – all of which are actually taken from the top-end ‘Asta’ variant of the Grand i10 Nios. Hyundai Grand i10 Nios Turbo from the back. (Photo: Hyundai)

Anyway, with the introduction of this new turbo variant, the Grand i10 Nios, at least on paper, marks itself as one of the quickest hatchbacks in less than Rs 10 lakh in India. But before we take a closer look at the performance, let’s talk about some of the changes that it gets.

From the outside, the turbo variant gets new badges on the front grille as well as at the back which reads turbo. It also comes with dual-tone colour options which includes a blacked-out roof. Do note that going for this dual-tone finish over a single-tone colour option will cost you Rs 5,000 more. 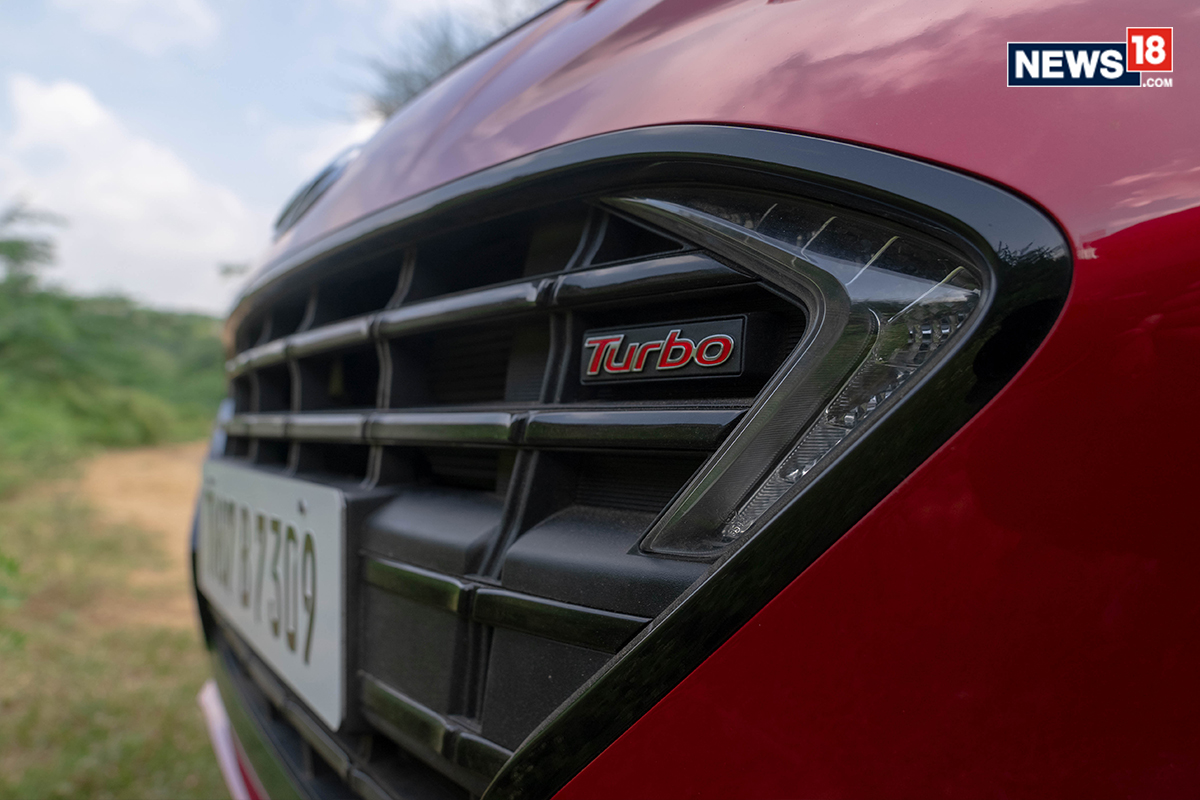 Hyundai Grand i10 Nios Turbo sports ‘Turbo’ badges on the front and at the back. (Photo: Hyundai) Hyundai Grand i10 Nios Turbo gets red accents throughout the cabin. (Photo: Hyundai)

The big change, however, is the engine under the hood. This is a three-cylinder 998cc turbocharged unit which has been carried over from the Hyundai Venue. The engine makes 100 PS of power and 172 Nm of torque and is offered only with a 5-speed manual gearbox. What’s impressive is that the claimed fuel efficiency of the Grand i10 Nios Turbo petrol stands at 20.3 km/l which is only 0.4 km/l less than the conventional 1.2-litre petrol engine which claims 20.7 km/l. This means, that for a small trade-off in fuel efficiency and a higher price tag, you get a lot more performance than before along with some additional features too. Now, we have tested this engine in the Venue and we were left impressed by it. What remains to be seen is how it fares on the smaller Grand i10 along with the manual gearbox. Because if Hyundai gets it right, then it might be one of the best value for money performance hatchbacks in the country. So there you have it, this is all you need to know about the new Hyundai Grand i10 Nios turbo petrol variant. We are soon going to drive it and bring you the full review of this very-promising car. But will it deliver on its promises? Stay tuned to find out.