Did you know that Nios is more for Irish? So how much Nios does the Grand i10 Nios offer? We find out.

If I were to look at the Hyundai Grand i10 that we all see on our roads and love, and tell you that I want more in Irish, then I would say ‘Nios’. The answer to that need, then, would be the Hyundai Grand i10 Nios. It has been launched at a price tag of Rs 5 lakh and recently, we got a chance to drive it around Udaipur’s highway and city roads. Here’s how it went.

We have to start with what is easily the biggest stand-out feature about the Grand i10 Nios – which is its design. Starting from the front, almost everything brings your attention to the massive grille. Be it the new swooping projector headlamps or the sharply chiselled bonnet, all of it makes the car feel low sporty. Everything brings your attention to the grille of the Hyundai Grand i10 Nios. (Image: Manav Sinha/News18.com)

Whereas the fog lamp housings and the boomerang-shaped LED daytime running lights makes it look wider. It is also longer and wider than before and gets a longer wheelbase which further adds to its stance. All combined, the car looks sporty and has a face that is instantly recognizable from a mile away. 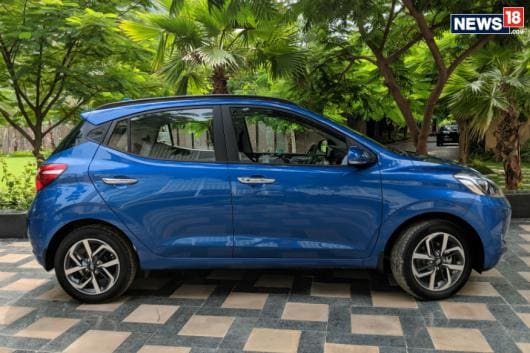 The Hyundai Grand i10 Nios has a rather round-sih side profile. (Image: Manav Sinha/News18.com)

Coming to the sides, the car has a bit of a rounded silhouette but everything looks proportionate. It gets new 15-inch alloy wheels which look quite similar to the one we have seen on the Hyundai Venue. It also gets chrome handlebars and a floating roof design with some badging on the C-pillar. And then, we come to the back. 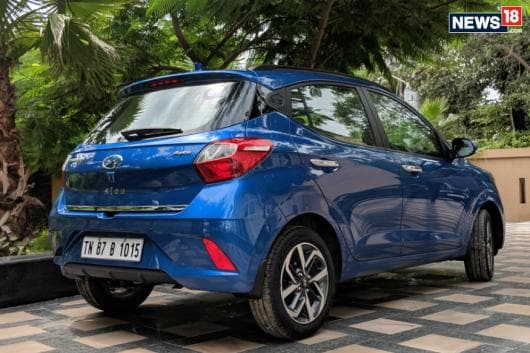 Hyundai Grand i10 Nios from the back. (Image: Manav Sinha/News18.com)

Yes, I know you are going to say that it looks very familiar to the Tata Tiago and to an extent, even the Ford Figo. Well, I agree with you, but here’s the thing, having looked at it in person, it is the better-looking amongst the three.

However, if there was one thing I could change, that would be at the back of the car as there’s a lot of lettering going on at the boot lid which makes the car look cluttered and does not go with the overall clean design. But overall, what really works in its favour is that the Nios isn’t trying too hard to look sporty or SUV-ish, it’s simply a good-looking hatchback and the good bits continue when you step inside the cabin as well. 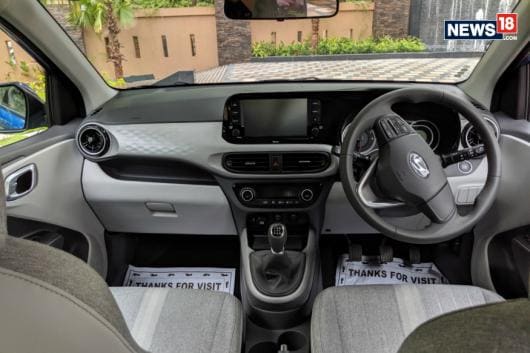 And the moment you do, you are greeted with an all-new design which barely has a resemblance to the older Grand i10. What really stands out right away is the dual-tone finish that also extends onto the glovebox (which is cooled, by the way) and also on to the doors. What we also really liked was the honeycomb pattern on the dash as well as the rotary air vents which make the cabin look upmarket and premium. There’s a new air-con control unit as well and the steering wheel is also like the one we have seen in the Venue. There are enough compartment spaces all around and the addition of a parcel tray on top of the glovebox is a nice touch. 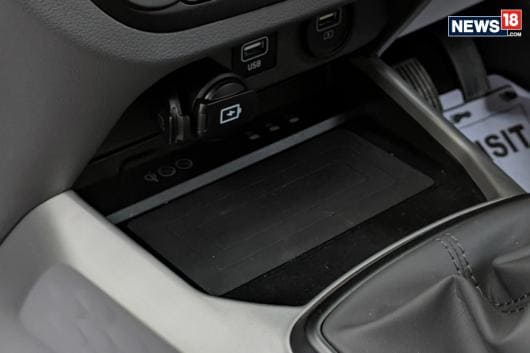 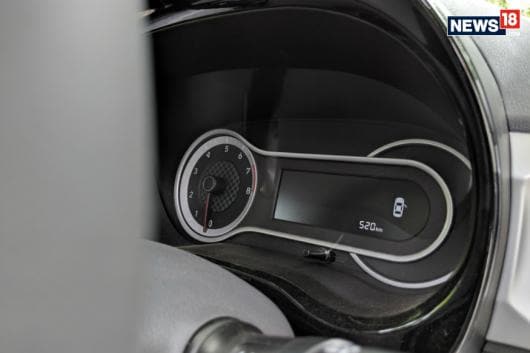 There’s a new instrument cluster as well which has a digital readout of almost everything along with an analogue tachometer and this looks rather nice as well. 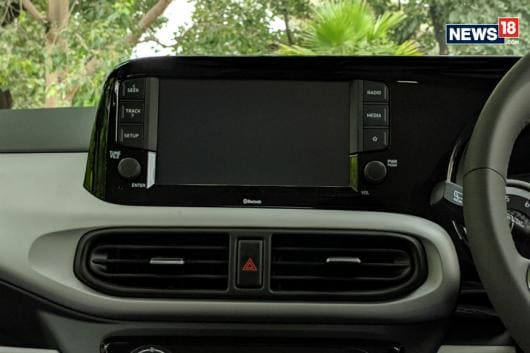 And then, there’s also the 8-inch touchscreen infotainment system which has a fantastic touch response and is easy to use. It supports Bluetooth, Voice Commands, Apple CarPlay and Android Auto. And there’s also a rear AC vent for rear-seat passengers which is always good to have. Coming to the back seat of the Hyundai Grand i10 Nios, well, the driver seat was adjusted to my height and for reference, I am 5 foot 10, and still, I had huge amount of knee room, shoulder room and headroom on offer.

The Hyundai Grand i10 Nios is a very spacious car. (Image: Manav Sinha/News18.com)

Hyundai has also ensured good under-thigh support and that does actually translate into a comfortable seating position in reality as well. Other than that, the bench is flat so you can have three people sitting abreast as well. Three people can sit abreast at the back seat of the Hyundai Grand i10 Nios. (Image: Manav Sinha/News18.com)

So overall, purely in terms of design, the Hyundai Grand i10 Nios has one of the best exterior looks and cabin under Rs 10 lakh so that’s a fantastic job done by Hyundai. But how different is it when it comes to the driving experience?

When it comes to the engine options, Hyundai has kept things very simple. You can either get a 1.2-litre petrol engine or a 1.2-litre diesel engine. The transmission that you get are either a 5-speed manual or a 5-speed AMT gearbox for both the engine options. But the best part about all of these drivetrain options is that no matter which one you pick, as compared to the older Hyundai Grand i10, you have more efficiency on offer.

Another thing to note is that the petrol engine is BS-VI compliant whereas the diesel engine is currently in BS-IV compliant state of tune, with a BS-VI version set to come sometime later. And, both the engine options make the same power and torque as before. The boomerang-shaped LED DRLs of the Hyundai Grand i10 Nios give it a unique look. (Image: Manav Sinha/News18.com)

We drove the diesel-engine powered top-spec variant that gets a 5-speed manual gearbox and makes 75 PS of power and makes about 190 Nm of torque. In terms of the driving experience, well, there’s not a lot of difference. The bigger wheels and the longer wheelbase make for a more planted ride and the body roll is better controlled as well. The brakes on the Nios have a great bite and the engine is punchy, making tackling city traffic a breeze. We tackled some pretty bad roads and also, drove it on smooth highway roads and in both the conditions, the Grand i10 never felt uncomfortable. But then, the negatives remain as well. This diesel engine has that typical clutter sound. It is also quite loud and a lot of it manages to creep inside the cabin, making the car feel stressed even when it isn’t.

What’s better this time around, though, is that the steering wheel does not feel as dead as the older model. It is now a bit heavier and weighs up better as the speeds climb, giving good feedback. The Hyundai Grand i10 Nios is an impressive car. (Image: Manav Sinha/News18.com)

This means, the new Grand i10 Nios also drives better than the older model and is giving way better looks and a lot more features than before while charging a small premium. But as a result, it is now priced even closer to the Maruti Suzuki Swift. Will that gamble pay off? Well, that’s a story for another day.

So to sum up my thoughts about the Hyundai Grand i10, we’ve driven it on the beautiful highways of Udaipur and also taken it through some bad roads through the city. At the end of the day, the Grand i10 Nios never left me wanting for more. It looks good, it offers good fuel efficiency, has a good list of features and is priced aggressively as well. So you really have to ask yourself, if you’re looking for a car for city drive about, well, what more do you want?