the Indian Roadmaster Elite will cost over Rs 50 lakhs if you were to include taxes. But what is it that makes it so special, and expensive?

Manav Sinha
First thing first, the Rs 48 lakh price tag of the Indian Roadmaster Elite is actually the ex-showroom price. Which means, if you were to purchase this motorcycle, the final price will come out to be well over Rs 50 lakh. That’s about half a Crore rupees which you’ll be spending on a motorcycle. And if you are wondering at this point about who will buy this motorcycle in India? Well, Indian Motorcycles allotted two motorcycles for India (it is a limited edition motorcycle with only 300 units to ever be made) and at the time of the launch of the motorcycle, announced that both the units were already sold out. What makes this motorcycle so special? Well, the list is quite long. But, we have decided to compile a few of those features below along with some images to give you a detailed look of the motorcycle. Well, if you are spending this kind of money, it better be having some gold in it. The Indian Roadmaster Elite comes with a beautiful dual-tone black and cobalt blue paint job and as per the company, the motorcycle is painted by hand and takes over 30 hours to be completed. The highlight, though, is the fuel tank which has a 23-karat gold leaf badge on it. If you weight the motorcycle with a full tank, the Indian Roadmaster Elite weighs in at a whopping 433 Kg, and, it is almost 9 feet in length. Carrying on with everything being big is the engine which is named as the ‘Thunderstroke 111’. This is a 1811cc engine that makes a mammoth 150 Nm of torque which is delivered as low as 2900 RPM. Oh, and the engine cover is in gold too. There’s a touch of history going on with the motorcycle as well. There is an illuminated headdress at the front which has been donned by every Indian motorcycle since 1947. 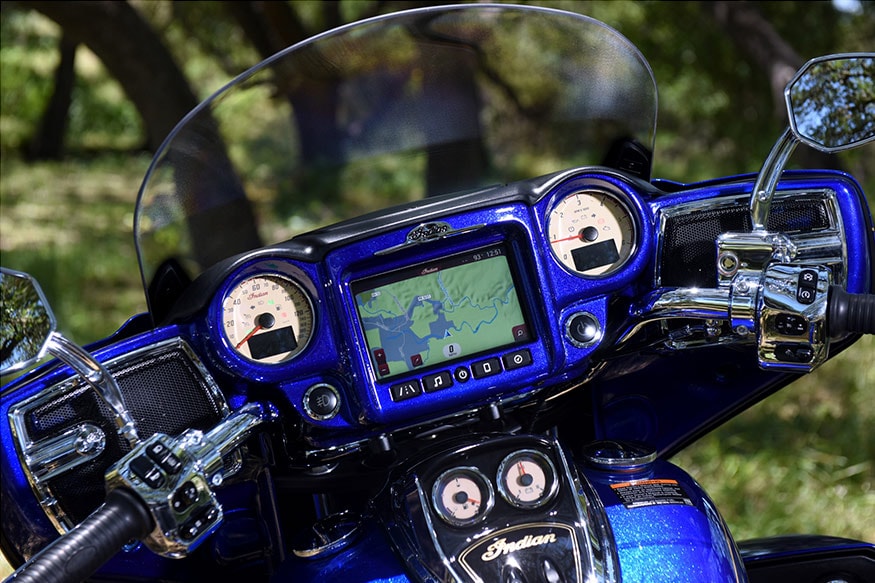 The Indian Roadmaster is also equipped with features to the brim. The first thing that will catch your attention is the huge 7-inch touchscreen infotainment system on the dash. The motorcycle comes with Bluetooth connectivity and will also showcase maps on the screen along with navigation for the rider’s convenience. The system can be operated through the handlebar mounted buttons too but if that’s not your thing, then the screen supports gestures like swipes and pinch to zoom as well. To let you know exactly what condition your motorcycle is in, the system also showcases several statistics about the motorcycle as well. And, it comes with a key fob that has a proximity sensor which is picked up the motorcycle. Why? So that you don’t have to take the key out of your pocket. Just sit on the bike, it will sense the key is with you, and the motorcycle can be started through a button next to the infotainment system. Also, the wind deflector is adjustable, electronically. It can be lowered or raised by the touch of a button on the handlebar. 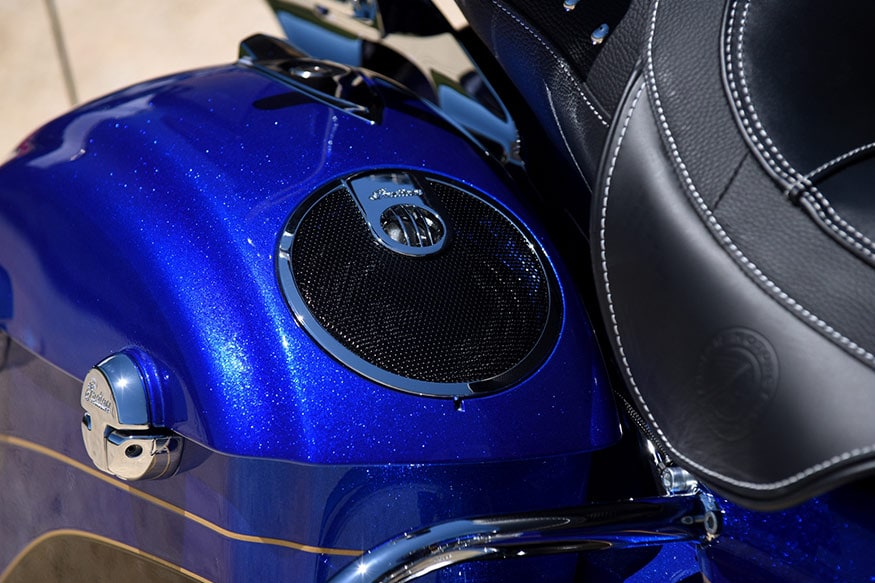 Yes, we mentioned Bluetooth connectivity and chances are that you must have thought of listening to songs on this motorcycle by now. Indian Motorcycles have you covered there as well as the Roadmaster Elite comes with an inbuilt 300-watt music system that delivers high-quality surround sound output thanks to the speakers placed on the fairing, trunk and the saddlebags as well. There’s a USB port on board as well, there’s FM/AM reception and you can charge your smartphone while you are riding this motorcycle as well. In case you also noticed the hard saddlebags, well, they have remote locking which can be operated through the key or a console-mounted button and come with weatherproof seals and the same is applicable for the rear trunk as well. There’s a lot more to this motorcycle as well. The Indian Roadmaster Elite comes with cruise control for relaxed highway riding and the footboard is adjustable as well for better ergonomics. The seats are wrapped in leather and the passenger also gets armrests – which are also are wrapped in leather. All the lights on this Indian are LEDs and the motorcycle’s fairing takes design inspiration from the locomotives of the 1950s.

You can read about in this list of the most expensive motorcycles on sale in India.
Manav Sinha