Isuzu recently updated the Mu-X in India and here's our road-test review decoding if the SUV is a worthy competitor to Toyota Fortuner and Ford Endeavour?

The full-grown 7-seater SUV market is tailor made for India. While SUVs like Toyota Fortuner has dominated the market for quite long now, rivals like Ford Endeavour gave it a tough fight initially. And with the arrival of the Mahindra Alturas G4, the competition has intensified even further. However, there is one product that is sitting silently in the segment and is known for its value-for-money offering – the Isuzu Mu-X. The 100-year old Japanese brand has recently updated its 7-seater SUV and the new Mu-X gets a more dominating road presence. But is it all about the looks, or has Isuzu managed to squeeze more out of the Fortuner competitor? We find in our Isuzu Mu-X road test review- The Isuzu Mu-X was launched in India as the refreshed mu-7 with a new design which was not as high on personality as that of the rivals. Isuzu managed to eliminate this concern by giving the new Mu-X a more appealing road presence, especially the red-coloured SUV we drove. There’s a lot of chrome treatment, especially on the front with a big chrome grille. The sides get chrome treatment on the rear view mirrors, door handles, while the rear also has a large chrome strip between the wrap around tail lights. The design of the alloys is worth mentioning too, which now gets fork style 6-element dual tone alloys. Overall, the Mu-X looks similar to the D-Max V-Cross pick-up truck (at least from the front) and has a better road presence than ever. The Isuzu mu-X gets a similar dashboard layout as the previous Mu-X, but with an added touch of soft-touch leather throughout the cabin. Instead of the beige leather on seats like the previous Mu-X, the new leather gets a black treatment throughout the cabin with a dash of brushed aluminium finish on the centre console, steering and door panels. The large glass area gives you a feeling of plush living room, complemented by super comfortable sofa styled seats at the front.

The centre console gets a 7”-touch screen infotainment screen, which is as basic as they get and we are surprised why Isuzu hasn’t added a decent unit to the new Mu-X considering what all the competition is offering. However, the sound output is superior and once the system is on, there’s no outside ambience that you will hear. There’s a rotary automatic climate control, roof mounted rear AC vents, cruise control in the name of features, while Isuzu has also removed the 10” roof mounted DVD screens for the rear passengers. 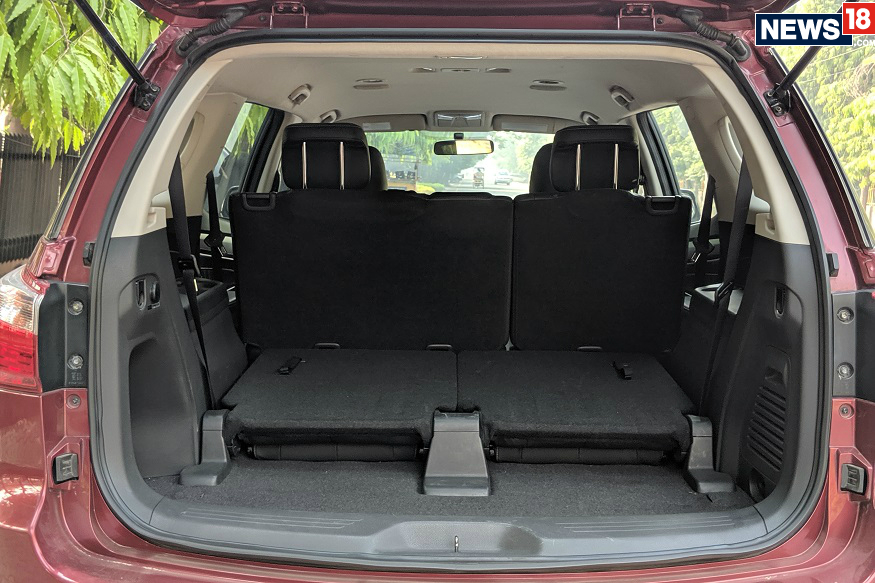 In terms of practicality and space, the Mu-X is a very practical car that gets full 3 rows of seating that can easily accommodate 7 full-grown adults. There’s an additional compartment over the glove box, pop-out dual glass holders, under arm stowage, flat folding third row seat, and other cubby holes to keep your stuff. Getting in and out of the third row is easy too, with easy folding second row seats. Where the Isuzu Mu-X miss is the build quality of the cabin. The button quality is not upto the mark. Overall, the Isuzu Mu-X fulfils only the basic needs of a cabin. The Isuzu Mu-X retains the 3-litre VGS turbo engine with 177 PS and 380 Nm output. The engine is mated to an automatic gearbox with sequential shift. The Mu-X also gets a shift-on-the-fly 4WD system. On paper the torque is little less as compared to the other rivals, but feels enough to push it through city traffic and is a stunner in the highway run. There’s a lot of noise while accelerating hard and the SUV can be enjoyed best at the cruising speed. That said, Isuzu has worked hard to keep the NVH levels at bay and only few sounds penetrate into the cabin.

The steering is overtly hard and it takes a lot of effort to take a U-tune or park the car in the tight spaces. However, on the highways, the Mu-X feels planted and in control. What surpasses the Mu-X over rivals is the supreme ride quality and the braking abilities. The ride quality is on a soft side and eats up most of the potholes and broken road patches. The brakes on the other hand, are as good as they can get and makes you feel in control of a car of this size and weight. We got a decent 11 kmpl mileage on our mostly city driving test run. The Isuzu Mu-X was launched as an affordable alternative to established giants like Toyota Fortuner and Ford Endeavour. Retailing a bit north of Rs 26 Lakh for the 4x2 model and Rs 28 Lakh for the 4x4 model (ex-showroom, Delhi), the Mu-X undercuts the base diesel Fortuner by almost Rs 3.5 Lakh (Fortuner is also available in petrol variants) and the Ford Endeavour by almost Rs 2 Lakh. However, there’s the Mahindra Alturas in the mix now that is priced at Rs 26.95 Lakh. Also, a lesser price tag means less equipment, only one engine option and not so exciting cabin. At the end, it all boils down to affordability vs brand. If you need a basic yet powerful 7-seater SUV with a dominant personality and off-roading abilities and can live without modern tech features, Isuzu Mu-X perfectly fits your bill.