The Jaguar XE is the British competitor in a playing field that’s been dominated by German cars. But the XE does not fight the fight, the way one would expect.

The name of a brand plays a big role as it is responsible for the first thing that a person would think of when they hear the name of it. For me, when I think of ‘Jaguar’, it feels synonymous with emotions. It is supposed to invoke a feeling of joy and pride and it should make you want to say, “its a Jaaaaag.” And here’s the thing, cars can have several kinds of purpose. It can be the place for your skype-based meetings, can be seen as a convenience for commuters, your bedroom or your mobile wallpaper or a combination of all the unnecessary things that come attached to what people call as a ‘rear seat’ because your couch doesn’t have wheels and you need to get places and can’t be bothered to drive the ‘seat’ around. If you are someone like this then very well, you have the freedom to be whatever you want to be. And in that case, in short, this car is more expensive than the competition and you can have a cheaper seat for somewhat equivalent bragging rights and that probably tells you everything you need to know.

But, if you are someone like me, who wants to have a car that connects to the driver in a special way, makes you grin like an idiot and you just have to look back at the car after you’ve parked it and are walking away – well, then you might be interested in the Jaguar XE.

The Jaguar XE is a rather subtle-looking car, at least as per Jaguar standards. But it grows on you very quickly and the subtle underlying aggression in the design language is what really stands out. The car is long, really long. In fact, it is longer than the Mercedes-Benz C-Class, BMW 3 Series and the Audi A4. It is also wider than all three and it is also lower than all three! As a result, it oozes of character as it is a low-slung, angry-looking sedan. And speaking of angry looking, have you seen the face that the XE sports? That face along with the long and chiselled muscular bonnet gives the car its own unique identity. The Jaguar XE has an aggressively-styled face. (Photo: Manav Sinha/News18.com)

The same is carried on over to the sides as well and that’s thanks to the roofline which almost merges seamlessly into the boot lid giving the Jaguar XE a coupe-like look instead of a conventional three-box design. And it is here that I can point out the only thing in its exterior which doesn’t make me go wow - the wheels. While in the current spec, they make perfect sense for Indian roads, I just wish they were a little bigger simply to match up to the exterior appeal of the Jaguar XE. Case in point, look up the Jaguar XE S that’s available in some other international markets. Although, Jaguar does offer a choice of about 19 alloy wheel design options as an accessory so that pretty much makes up for it. Coming to the back, the highlight has to the two-piece tail light and the dual exhausts. Look closer and you will see the resemblance of the Jaguar F-Type’s tail lights on the XE and that’s a very nice touch by Jaguar. Overall, the car looks fantastic from almost all angles and keep in mind that this design was first unveiled to the world all the way back at the Paris Motor Show 2014. Yes, this is a 5-year old design and it still looks great even when the competition has received its fair share of design updates all, including the launch of all-new models, all this while. The tail lamps of the Jaguar XE have similar detailing to the Jaguar F-Type. (Photo: Manav Sinha/News18.com)

Look inside and the age begins to show. The interiors feel simple but don’t let that fool you into thinking that the XE lacks any features. Once on the driver seat, you will realise that you sit pretty low and snug and the seating position can be adjusted to a properly sporty one as well if you’d like. And that adds to the sporty aura that the exteriors exuberate. The interiors of the Jaguar XE are simple yet practical. (Photo: Manav Sinha/News18.com)

But in terms of the equipment that comes on board, the main highlight of the cabin is the 10-inch touchscreen infotainment system which has decent touch response and feedback. It comes with AUX, USB and Bluetooth Connectivity but it misses out on Apple CarPlay and Android Auto, something that you come to expect from a car in this segment. The party piece is the pop-up gear selector knob which simply never gets old in terms of excitement. And also, since the XE we drove was the top-spec variant, it gets a 320 W Meridian Sound System which sounds brilliant. The instrument cluster has two analogue dials reading out the engine RPM and the car’s speed which flank the digital display in the middle. The Jaguar XE's instrument cluster is a combination of digital and analogue readouts. (Photo: Manav Sinha/News18.com)

At the back, you have decent leg room and under-thigh support and is overall a good place to be in. But it is best suited for two passengers only as the transmission tunnel and the protruding centre armrest will make it difficult to adjust three adults at the back.

Other than that, though, the build quality of the XE is great and the quality of materials used is fantastic too. Everything feels well put together and premium.

Right, with all that out of the way, it is time to come to the part that really lets the XE shine – its driving.

This engine is what makes the XE, a proper Jaguar. The engine feels lively from the get-go and the moment you put down your foot and ask the car for a bit of power, it serves it in big dollops of happiness. Belonging to the new Ingenium family of engines, the power is spread out far and wide across the RPM range and once you go past 3000 RPM, the engine also serves up a muted but good-sounding growl inside the cabin. It’s quick to build up revs and offers linear power and torque throughout. And it is this state of tune that makes it so exciting. The peak power output of 247 hp comes at as high as 5500 RPM but the secret is in the torque delivery. The engine makes a tasty 365 Nm of torque which is present through 1200-4500 RPM! And that’s the area where you’ll pretty much keep the car if you are driving fast and that means, the car almost always feels eager and peppy whenever the need arises for those quick overtakes or highway runs.

Connected to this engine is an 8-speed Automatic Transmission that can also be operated through the steering-mounted paddle shifters. They are clearly tuned for better fuel economy but, thankfully, feel a lot more engaging and quick with their shifts in Dynamic and Sports Mode. 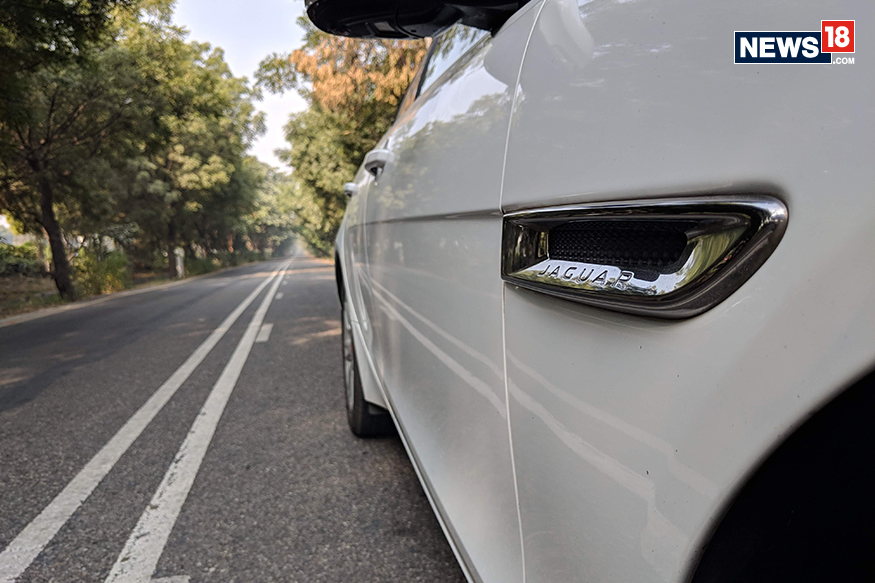 But Jaguar didn’t stop just here as they went the extra mile to ensure good driving dynamics and that shows. The suspension setup, while a bit stiff at lower speeds, makes the car feel planted during corners. The steering too provides great feedback and lets you feel exactly what the car is behaving like. And that’s not it, the XE sends all that power to the rear wheels and comes with a perfect 50:50 weight distribution. And yes, if you’re wondering, the car gets the usual features like Hill-start Assist, Engine Start Stop, Traction Control and Cruise Control as well.

And above all of this, the XE comes with Torque Vectoring by Braking – something you usually see in performance-oriented cars. What this does is, during cornering, it provides controlled independent braking on the inside front and rear wheels which in simple words, makes the XE really agile and quick during turn-ins.

All of this comes together to make the XE a great car to drive. Oh, and when it comes to numbers, the Jaguar XE can attain a top speed of 250 km/h and can do a 0-100 km/h sprint in just 6.5 seconds.

The Chink in the Armor

While all of this sounds really exciting, and it is, the Jaguar XE has one weak point and it’s not the car itself. It is the price tag at which it comes. The variant we tested – the XE Portfolio (Petrol) comes at an ex-showroom price of Rs 46.52 lakh and at this price point, the XE comes at a premium price point in the segment. And most importantly, this particular variant inches way too close for comfort to the BMW 5-Series which sits a segment above and has a starting price of 53.8 lakh. That’s not it, Jaguar’s own competitor for the higher segment – the XF – has a starting price tag of 49.78 lakh (all ex-showroom prices). And being a segment above, both these cars offer pretty much more of everything. The starting price points of the Jaguar XE, however, is Rs 40.6 lakh for the petrol variant and Rs 41.34 lakh for the diesel variant – making them a lot more sensible option for ownership. But keep in mind, you will miss out on the fantastic engine that the XE petrol Portfolio gets.

At the end of the day, the Jaguar XE takes the fight to the Germans with an impressive list of positives. The variant we tested certainly makes the XE as one of the most exciting cars in its segment, albeit at a premium price tag. So what you really need to ask yourself if you’re thinking of the Jaguar XE is the kind of usage you are going to have with it. And which seat are you going to find yourself in with this car?

And in this day and age where carmakers are focusing more and more on SUVs, we need more of such cars. Cars that put the driving experience on top of their list of priorities and want to evoke a feeling of joy to the one driving it.

So, If you’re someone who wants to have a car that connects to the driver in a special way, makes you grin like an idiot and you make you look back at the car after you’ve parked it and are walking away – well, then you might be interested in the Jaguar XE.