Jawa Motorcycles has launched 3 bikes in India - Standard, Forty-Two and Perak at a starting price of Rs 1.55 Lakh.

Arjit Garg
The Iconic Jawa Motorcycle brand has finally re-entered India and launched the new 300cc motorcycles today. The Jawa prices start at Rs 1.55 Lakh (ex-showroom, Delhi) and is available for bookings at Rs 5000. There are 3 options to choose from – Jawa Standard, Jawa Forty Two, and Jawa Perak. The Jawa is priced at Rs 1.64 Lakh, Forty Two at Rs 1.55 Lakh and Perak Rs 1.89 Lakh. The bikes will be available through 105 dealerships for now with further expansion of 75 dealerships.

The reintroduction of the brand in India took place 22 years after closing their operations in the country back in 1996. Back in 2016, Mahindra and Mahindra, one of the India’s largest automobile conglomerate acquired the brand licence to produce and sell Jawa motorcycles in the Indian sub-continent.

The new Jawa motorcycle gets a rounded headlight, a curvy tank, spoke wheels and a flat seat. The engine, which was revealed by Mahindra last month, gets twin exhaust mufflers, like the older Jawa motorcycles. Apart from this, other old-school design elements like round indicators, round mirrors and telescopic fork, as seen on the Royal Enfield Classic 350, further add to the retro appeal of the bike. Mahindra unveiled a 293cc liquid cooled single cylinder engine that powers the Jawa and Jawa Forty Two motorcycles. The engine has been developed from the ground up through a collaboration between the group's R&D centre in Pune and technical centre in Varese, Italy. The new Jawa produces 27hp and 28Nm of peak torque and be mated to a 6-speed gearbox. The Perak, on the other hand, is powered by a 334cc, liquid cooled, single cylinder, DOHC engine which develops 30bhp and 31nm of torque.

According to Mahindra, the new engine has been developed from scratch and will be BS-VI ready. There are a total of 9 colors to choose from - 3 for Standard and 6 for Forty Two. 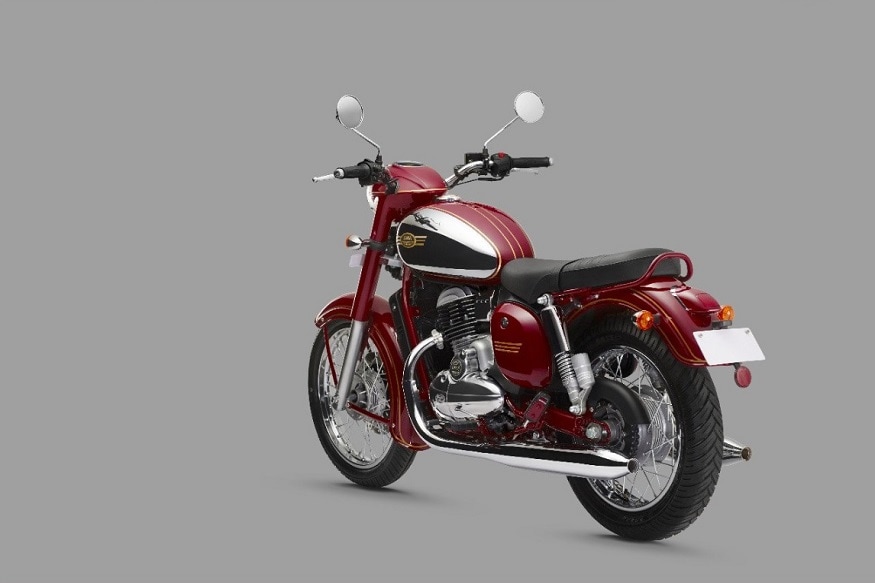 The new Jawa motorcycle gets a completely new frame and is different from that seen on the Mahindra Mojo. The bike gets a telescopic fork at the front and twin shock absorbers at the back with a gas-charged canister at the bottom. Braking is handled by a single disc brake at the front and a rear drum brake at the back. Therefore, the Jawa also gets a single-channel ABS unit in the front.

The Jawa 300 motorcycles will directly compete with the growing market of 250cc+ commuter motorcycles in India, including products like Royal Enfield 350, Bajaj Dominar 400, Honda CBR and more.
Arjit Garg