The Kent CamEye aims to be the all-in-one solution for your in-car safety requirements. But at a price tag of Rs 17,999, is this the device we all have been waiting for?

You can never be too safe when you are out on public roads but there are several ways which can help one be better prepared for those unwanted scenarios, and rightly so, given the sheer number of cars that are being driven daily, which takes the probability of an incident that much higher. The measure that you can take starts right from the car that you buy. Nowadays, consumers are giving more priority to safety than ever before but what if there were ways to make you, as mentioned above, safer and better prepared after you have got yourself a car? Well, the measures include things like GPS trackers, OBD devices, dashcams and so on and this is where Kent comes in. Yes, this is the same Kent that is known for their RO systems and they now have a device called the CamEye which promises to be the one-stop solution for all your needs. We spent quite a lot of time with the device attached to our car and this is how the experience was like.

The installation process for the device begins from the download of the Kent CamEye app that is available on both Android and iOS and is free to install. Once that is done, the QR code on the device has to be scanned and the rest of the steps are pretty self-explanatory and it doesn’t take long to get done with. After that, the device is supposed to be mounted next to the inside rearview mirror of your car and for that Kent offers a suction mount inside the box as well. That’s not it, Kent also provides cable clips which help manage the wire around the dash which beats the concern of a messy cabin. There is also a pry tool which helps in hiding the wires by tucking them inside dashboard panels – something that is great attention to detail and great for those who like their interiors to be neat and tidy. It is powered by being plugged into the 12V power socket using a Micro-USB cable and the one provided in the box is pretty long as well. Lastly, inside the box, you get a car charger as well. The build quality is great and it feels sturdy to hold. The only thing that we weren’t very happy with was the sim-card slot cover which feels a bit flimsy. However, you would probably use it only once in the entirety of the device's lifetime so it can be overlooked. Other than that, no complaints at all. 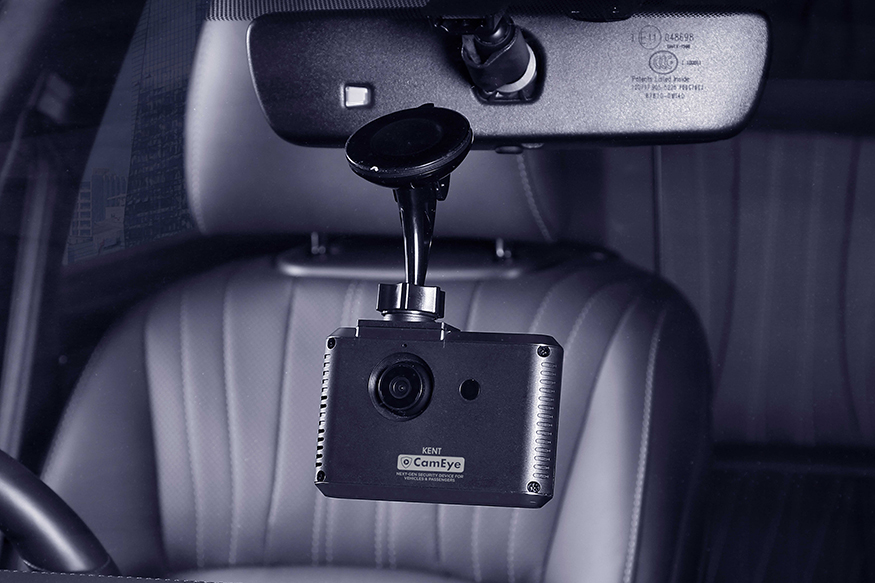 The stand-out feature of the Kent CamEye is the fact that first, it combines the advantages of having a Dashcam and a GPS tracker in one and second, building up on that and offering great connectivity features.

Let’s start with the Dashcam part. Usually, Dashcams come with a single-side facing camera but CamEye gets a front and a rear camera within the same device. This helps in letting the user see both inside and outside the car at the same time through their app. The quality of the video is good enough for you to make out the faces of the people who are seated at the back of the car and even the registration numbers of the cars outside the vehicle. The output is in colour and the device works great even at night thanks to light sensors and infrared compatibility. 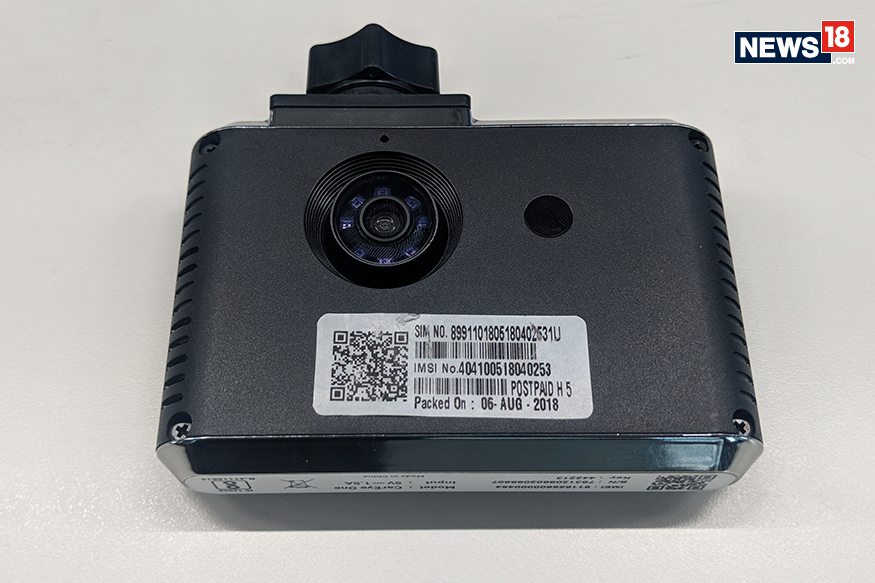 Coming to the GPS tracker bit, the device connects to the car through the power socket which means that it can be used even in older cars that do not have an OBD-II port accessible for the user. And as you would expect from a GPS tracker, it tracks your real-time location which can be accessed through your smartphone app. CamEye can also tell you when the car has been started, is in motion and when the trip has come to an end.

What’s really interesting is how the CamEye uses all of these capabilities and manages to offer a lot more. The device continuously monitors the car’s cabin temperature and knows when the ignition is on so it can recognize and alert the user when the car is stationary and the AC has been left switched on, resulting in better fuel management. The device also monitors noise levels inside the cabin and if it exceeds a certain limit, it can alert the user which can potentially come in handy in scenarios where chauffeur-driven car owners or fleet operators can be warned of screaming inside the car or simply, music being played out too loud. There’s also an Accelerometer on board which monitors the G-forces being generated and can identify when the car is being driven rashly.

As for the GPS bit, the app allows the user to not only see the real-time location but also see the route that was taken by the car during the past trips helping in identifying whether the vehicle is being run unnecessarily and also, the user can set a speed limit through the app. Whenever the car exceeds the designated speed, the user gets a notification. The best part, in any of these scenarios, when the user has got a notification and if the user wants to take a look at the car, they can simply do that by using the app. It shows real-time video playback of both the inside as well as the outside-facing camera.

And yes, the device also has an in-built microphone which gives access to audio features as well. You can hear whatever is going on inside the car. Using the app, the user can also talk to the car occupants whenever they wish to or can even hear what the occupants have to say in return.

There is a lot more going on behind the scenes as well, which allows for several features that can be accessed through the app. Kent has developed an in-house AI which, using the onboard camera, can recognize the driver’s face. So, you can simply add the face of yourself or of the chauffeur and when someone else drives the car, the AI will recognize a different face and will alert the user through the app as well. 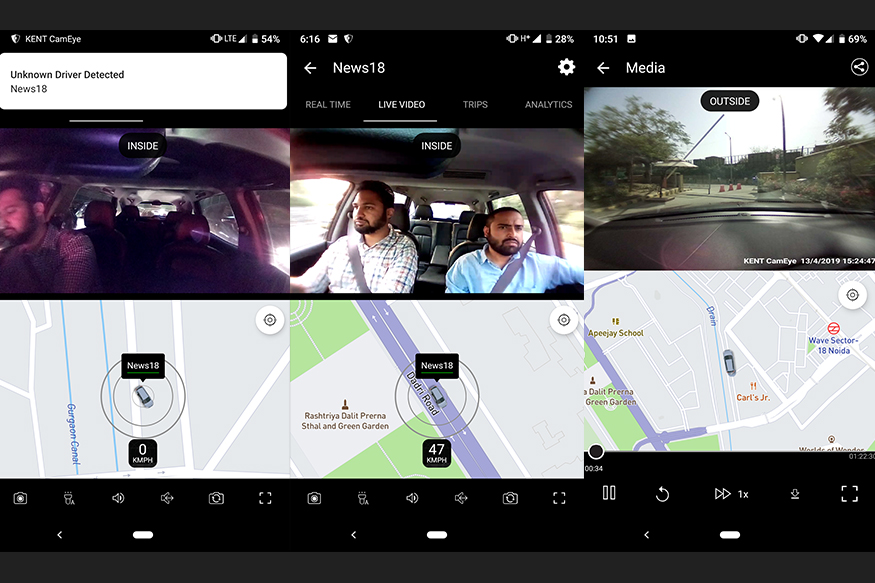 That’s not it, the device has 1 GB of RAM and 8 GB of internal storage. This comes in handy when the device does not have any connectivity. In that scenario, it continues to record in local memory and will upload everything to the cloud as soon as it gets connectivity. As for the memory that is available for the user on the cloud, Kent says that they are offering enough for the user to have access to a 30-day log of audio-video recordings and trip data that includes everything from the likes of the route history to trip analytics.

And in case you want to make a local file, the app allows for downloading the videos as well.

When it comes to safety, once the device has been started by the app user, it will only shut down when the battery dies. If the car occupant, say in the case of theft, tries to physically turn it off, well, it simply won’t. On top of that, it will also send a notification to the user that a reboot has been attempted. If the device is unplugged, the user gets notified too. And since it is meant to be left connected to the car, so whenever you drive, the device gets charged. When it is unplugged, that is when the 3000 mAh battery comes in handy which makes the device capable of staying on continuously for 24 hours – during all of which, the device will continuously be streaming the audio and video footage to the server along with GPS coordinates and route history as well. That’s not it, in regular driving conditions, you can add participants like your relatives through your app that can get access to all the data that the user gets. And yes, this is customizable – so you can choose who gets to see how much of your data and can customize it differently for different people.

And in case you are concerned for your privacy, Kent says that the data transmitted is end-to-end encrypted and can only be accessed by the user of the app to which the device has been paired. Who is it meant for?

So at the end of the day, who is this device meant for? Well, it can be used for both personal as well as official use.

When it comes to personal usage, up to 10 devices can be added to a single account. And when it comes to businesses, Kent says that they can provide a custom-made package for the interested companies allowing them to add as many devices as they want.

It is very hard to fault this device simply because of the sheer number of features that it offers. And given the wide array of analytics and monitoring capabilities that it has, it pretty much covers all the basics. However, if we really had to nitpick, the quality of the footage that you can live-stream is dependent on the device’s internet connection and if the car is being driven around, the quality drops quite a bit. However, it is still clear enough for you to make out the face of the passengers seated inside the car. And lastly, the driver will take some getting used to since the wide surface area of the device does feel a bit bothersome for the first few days especially since it comes in the field of view as it is placed right under the inside rearview mirror.

At a price tag of Rs 17,999, the Kent CamEye does have a very high initial acquisition cost which might make people interested in this product think twice before spending. On top of that, when you buy the CamEye, you only get a complimentary three-month subscription to their services – without which the device is completely useless. After the three months, the users can either opt for a Rs 600 monthly subscription package or a yearly package that costs Rs 6,000. So yes, the device does come at a cost but when you think about it, to cover the kind of features that the Kent CamEye comes with, you will have to fit in your car a couple of dashcams (one for the front and one facing inside your car) and a GPS tracking device – and the cost of these three almost comes close to the cost of the Kent CamEye. However, even in that condition, you still miss out on the plethora of connectivity features that Kent offers and the access to the analytics that it brings to the user. And it does all of this with a single device that does not end up making your cabin a mess of cables and devices.