The Kia Carens brings together the best of both worlds - the presence of an SUV and the practicality of an MPV. FInd out how in our review.

The Indian market does see a lot of car launches every now and then but some cars, over the years, have really filled a particular set of requirements very well and hence, have become really successful. Kia, on the other hand, has seen success with all of their cars in the Indian market and now their fourth product is the Kia Carens. What Kia is trying to do with the Carens is that they’re trying to fulfil not one but two sets of requirements as they say that the Carens is a mix of both SUV and an MPV. Today, we’re going to see how good the Carens fares on both of those fronts.

Let’s start with the design. The Kia Carens looks bigger when you see it in person as compared to when you see it in pictures and that is due to the kind of design that it has. It is modern and not bulky in a traditional sense, however, the size of the car is big enough to give it that big car feeling. I quite liked how there is attention to detail at the front grille and also on the chrome elements at both front and back.

It is only from the sides where the Kia Carens looks MPV-ish. And when you see it from here, you would wish for larger wheels so then it would keep up with the SUV character of the rest of the car. In simple words, the Carens has a good presence on road and it does stand out. Now as I take you through the front row, the middle row and then the last row, you will see the MPV theme come through with the great practicality highlights. Let’s start with what it gets, which is a wireless charging pad so you can charge your phone on the move. The 10.25-inch touchscreen infotainment system does support Android Auto, and Apple CarPlay but it is not a wireless system and I think that is a big miss. 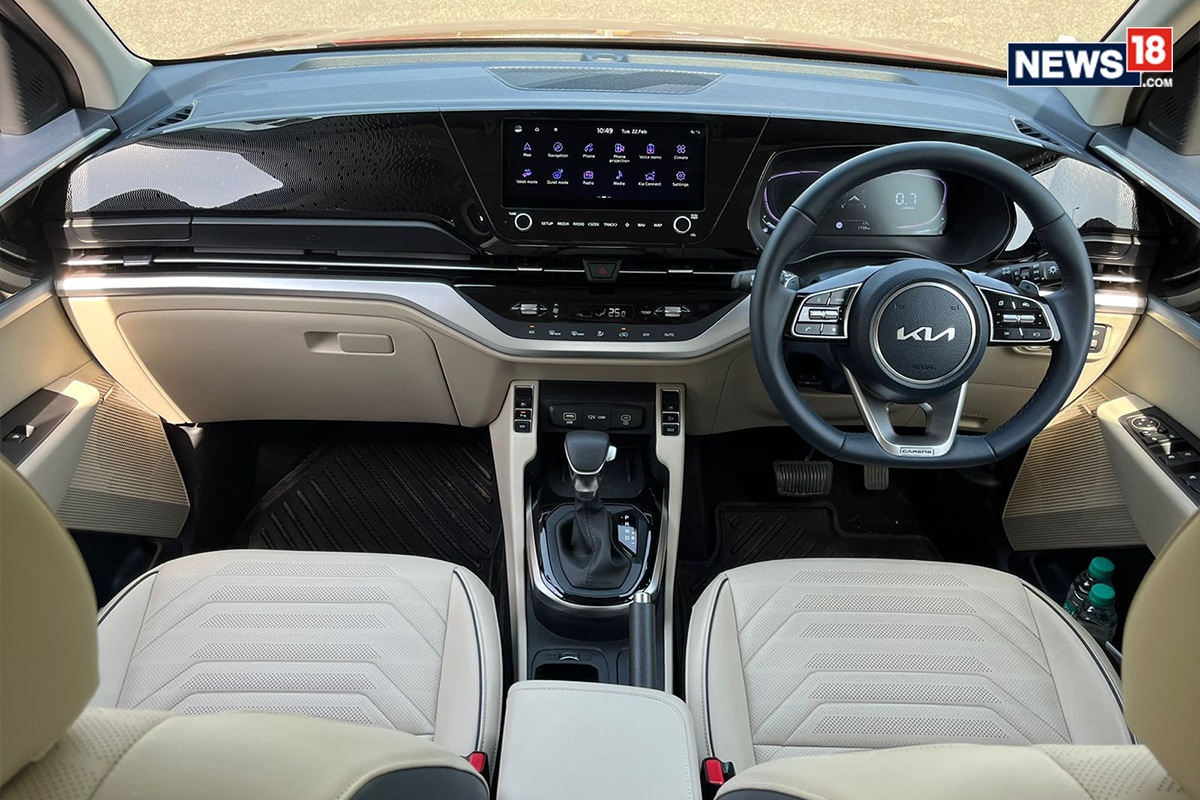 The infotainment system itself, though, has a good touch response and design, and it is easy to use. The visibility is not that great but it gets the job done.

You also have a digital instrument cluster behind the steering wheel and to be honest, I’m not a big fan of it because I want to know whatever is going on with the car in one glance and with the way everything is laid out design-wise, I think it’s a bit overdone. So, while it being a digital screen can be seen as a positive, I often wished for an analogue cluster instead. What I am a big fan of is the fit and finish on the dashboard. It’s of top-notch quality, everything looks great. You also have a nice blue tint on the steering wheel which looks different in a good way.

You also have a pattern design on the dash which is intriguing. But keep in mind, though, that whenever somebody sits in the car, that’s the first thing that they will touch, and since it is all gloss, you will have a lot of fingerprints that you will be wiping away all day. Nevertheless, overall, there are a lot of shades and colours used but it all works together as a whole and it all looks good. 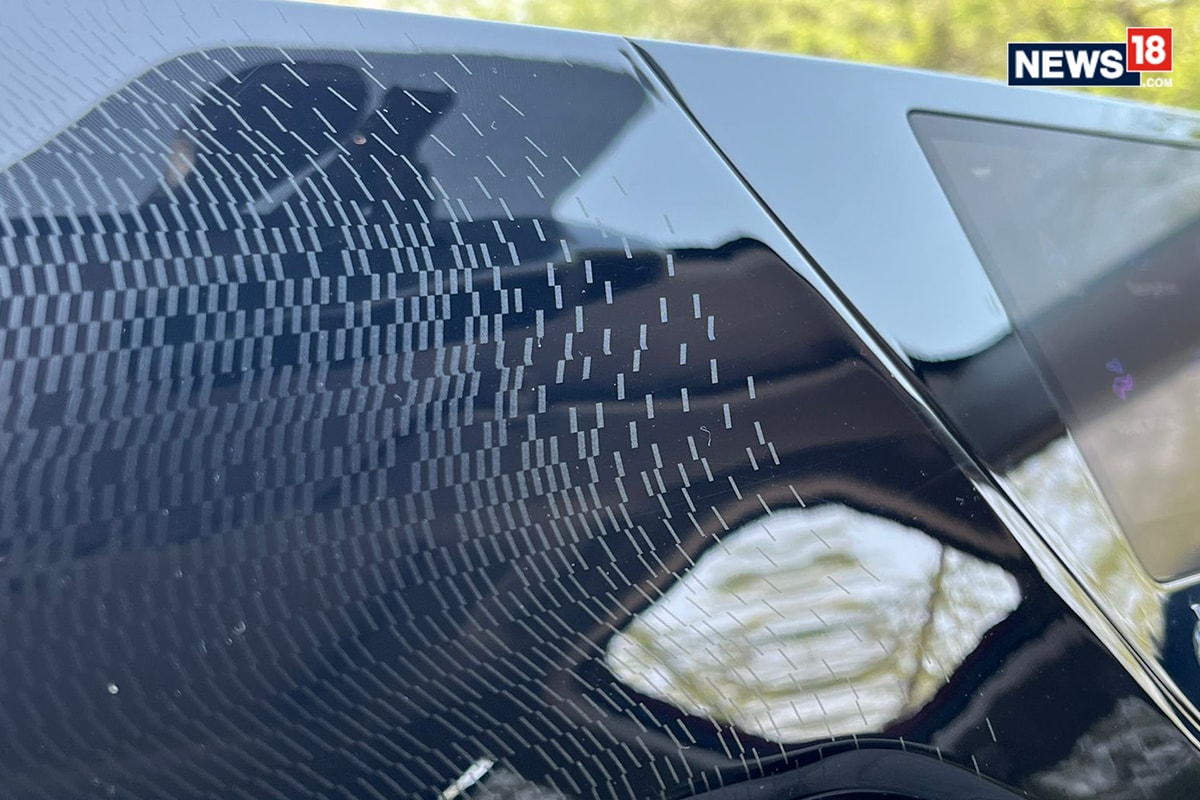 The design even gives you the impression of the AC vent being spread out through the width of the dash but keep in mind, the vents are only at their convention places. You have a nice finish over the vent position control adjusters and you also have a knurled finish on the fan and temperature control.

Speaking of which, the Air Con controls are all touch-based and so are all the buttons on the infotainment system. So you have to take your eyes off of the road if you want to operate all of that, but thankfully, you at least have a physical volume knob. You also get a lot of practical features. You have a lot of spaces to put in your water bottles and you also have a cooled cup holder in the middle. The armrest also opens up wherein you can take out the tray that is on top which opens up so much more space under it.

The Kia Carens also makes smart use of space as it has a retractable cup holder on the passenger side of the dash and a small retractable compartment on the driver side which can be used for storing coins and slips.

Lastly, it also comes with a sunroof but as you see it’s not a very big one and there’s a good reason for that – and that brings us to the middle row of seats. The reason why you don’t get a very big sunroof is that you instead get individual AC vents for the middle seat passengers and I think that’s a much better addition than having a large glass slab on top of your head, especially given how extreme the summer conditions are in our country.

Now, let’s talk about the middle seat experience. After setting the front seat as per my height which is 5’10”, I had plenty of room all around. Additionally, I can recline the seat and move it front and back as well opening up even more space. The seats are very comfortable too. 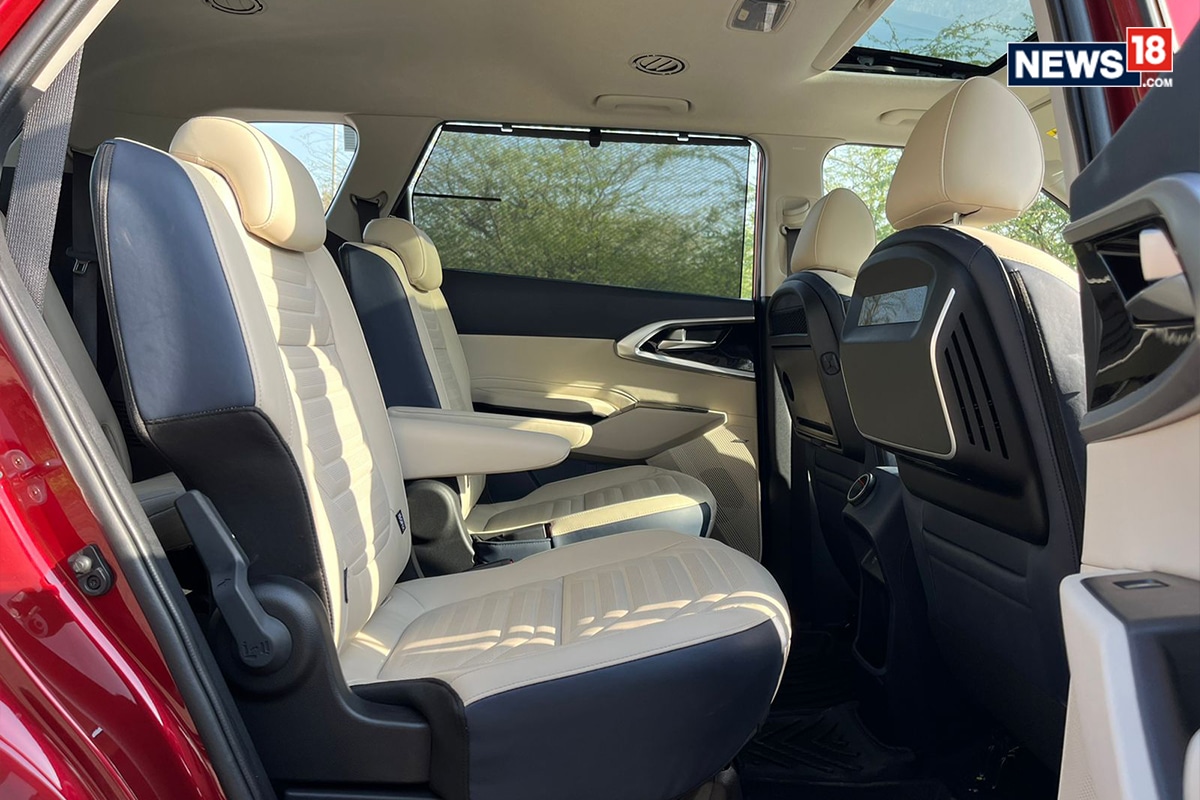 In this six-seater version, there is ample space between the two captain seats in the middle row so in case someone needs to shift to the last row of seats or vice versa, without stepping out of the car, can be done.

Behind the driver’s seat, there is an air purifier which is really important, especially in a place like Delhi, where we tested the Carens. On the other side, what you get is actually a tray with a cup holder and a slot for you to put in your mobile, tablet etc. This slot is lined up with a grippy material too, which is good attention to detail. But what I really like is that you have a couple of USB-C ports and those are really future-proofing, because in the future, everything is going to be USB-C. All your newer gadgets that you will buy during the course of owning this car, you will be able to use them in the Carens because you have USB-C type ports. Kia has gone the extra distance and has even put in wire holders on the seat as well. Could Kia have skipped this? Surely, but they didn’t and that’s the kind of thing that makes you like the car a lot more. Now, let’s get to the last row of seats. 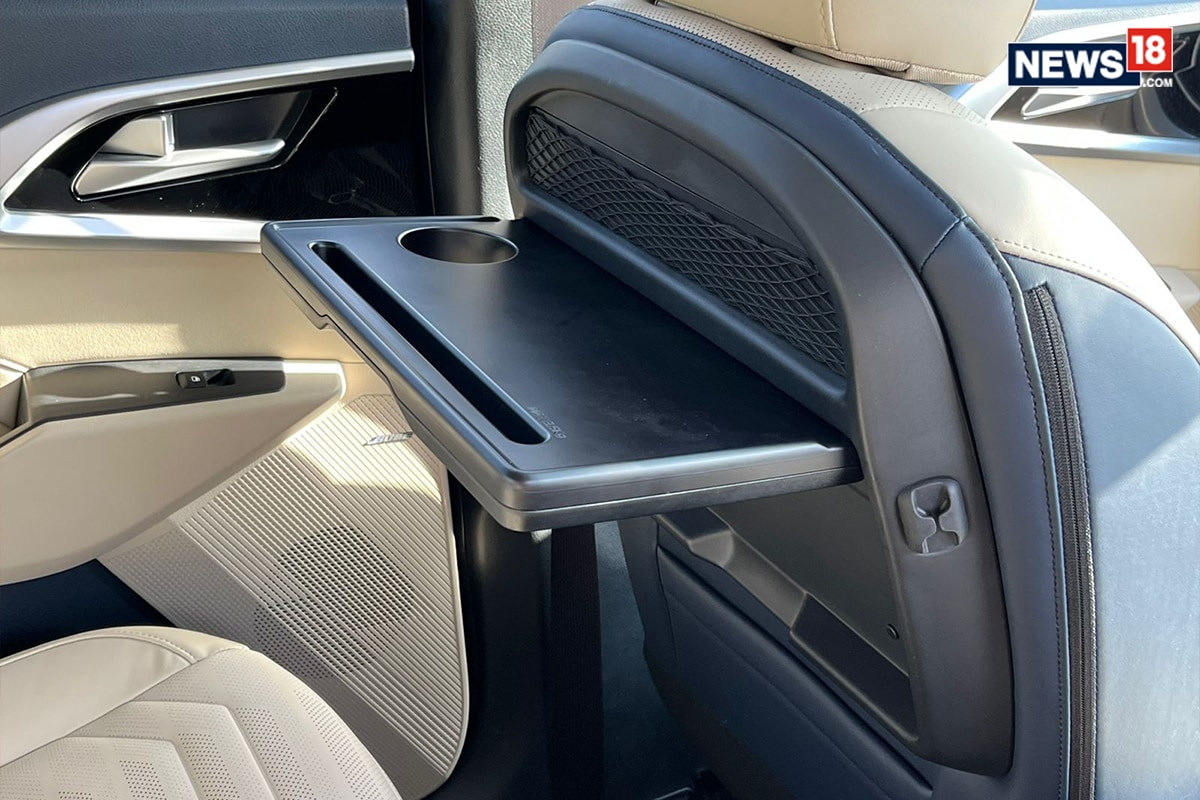 Getting to the last row of seats is also very easy, one of the easiest perhaps in any of the 7-seater alternatives that you will find in the market. With the press of a button, the entire tumble-down procedure of the middle row seat, so that you can access the last row of seats, happens automatically. That is a lot of hard work saved over the long run. Talking of the last row of seats, usually, these seven-seaters with a “+2” seat is meant for kids, but I can confirm that adults can sit here as well. For reference, I’m 5’10”, fairly large, and I can sit there quite comfortably. I have adjustable headrests and I can decline the seat as well opening up even more space. Both last row passengers get a cubbyhole which has been extended to accommodate a tablet as well, both sides get individual USB-C ports too – so no fighting between the kids, I guess. And yes, you also get individual rear AC vents for both the passengers and that is a great addition. All in all, the Kia Carens has one of the best 7-seater experiences in this price bracket.

Now let’s talk about how the Kia Carens drives and very honestly, I’m going to keep this short and simple. The Carens is not meant for enthusiasts as it has a relaxed driving experience and the drivetrain feels the best when it is driven with a light foot. However, the refinement is great and sound insulation is good too.

What’s stood out, though, is the way the Carens is set up to tackle our roads as the driving experience is good even if you are driving it alone or if the car is filled with passengers, be it on good roads or bad roads. It has the same drivetrain as the Kia Seltos but since it is bigger and is meant to carry more people, the Carens ends up driving strictly like a family car. So there you have it, this is the Kia Carens. For me, the most impressive part was the car’s practicality and its attention to detail which, as I said, make it a very good, family car. Right now, it has an introductory starting price of Rs 9 lakh (ex-showroom) so maybe by the time you read this, the price could go up. So make sure to reach out to your dealer and ask for the latest price of this car. To wrap it up, the Kia Carens is incredible value for money and it’s safe to say that Kia has hit it out of the park, yet again.

Manav Sinha leads the News18 Auto desk, and is an avid visitor to the race track himself. He spends a lot of time on Google to bring you the automobil...Read More