The Lamborghini Huracan STO Super Trofeo Omologata is powered by a V10 naturally-aspirated engine that makes 640 hp and 565 Nm of torque.

When it comes to supercars, Lamborghini is one of the most reputed brands in the world and one of their most popular cars is the Lamborghini Huracan. But if you take the Huracan and turn everything to 11, what you get is the Huracan STO – the latest supercar which has been launched by Lamborghini in India at a price of Rs 4.99 crore (ex-showroom). The Huracan STO is basically a road-going version of the Huracan Super Trofeo and the Lamborghini GT3 racing cars which is signified by the full-form of the STO in its name, which stands for Super Trofeo Omologata, the car that has won 24 Hours of Daytona in 2018, 2019 and 2020 – three years in a row.

It is powered by a V10 naturally-aspirated engine that makes 640 hp and 565 Nm of torque. But what also adds to it being so quick on its feet is the fact that 75 per cent of the car’s body panels are carbon-fibre and on top of that, the STO does away with the four-wheel-drive system and all of this makes it 43 Kg lighter than the Huracan Perfromante which has now been discontinued. Other weight-saving measures include a 20 per cent lighter windscreen, new magnesium wheels and an updated rear wing which maintains the same rigidity while using 25 per cent less carbon material when compared to the Performante.

Inside the new Lamborghini, the cockpit has been updated with a host of carbon elements and the company has gone to the lengths of putting in carbon-weaved floor mats, lightweight door latches and even used their ‘Carbon Skin’ material throughout which is lighter than Alcantara, all in order to make the car lighter. On the outside, the STO also gets an extreme aerodynamic makeover which has been done after extensive wind-tunned testing and as a result, there are new bonnet ducts and the bonnet, the splitter and the front bumper all are on piece – similar to how it is on a race car. There are new wheel arch vents to improve brake cooling and the aerodynamics and the underbody of the car has been reworked along with the rear diffuser too. The big visual change however is the new, large air scoop which sits on top of the engine cover and accompanies the large ‘shark fin’ design element behind it which is meant to improve stability. The large rear wing is adjustable by 13 per cent as well for optimum airflow. All in all, these changes have helped Lamborghini achieve 37 per cent increase in airflow efficiency and a massive 53 per cent downforce increase – 450 Kilos of it at 280 km/h – as compared to the Huracan Performante. The car also gets new tyres which are specifically built for this car and are called Bridgestone Potenza and these are matched with the updated braking system which is the Brembo CCM-R system that uses F1-optimised carbon-ceramic materials giving the car extreme levels of grip and braking power. 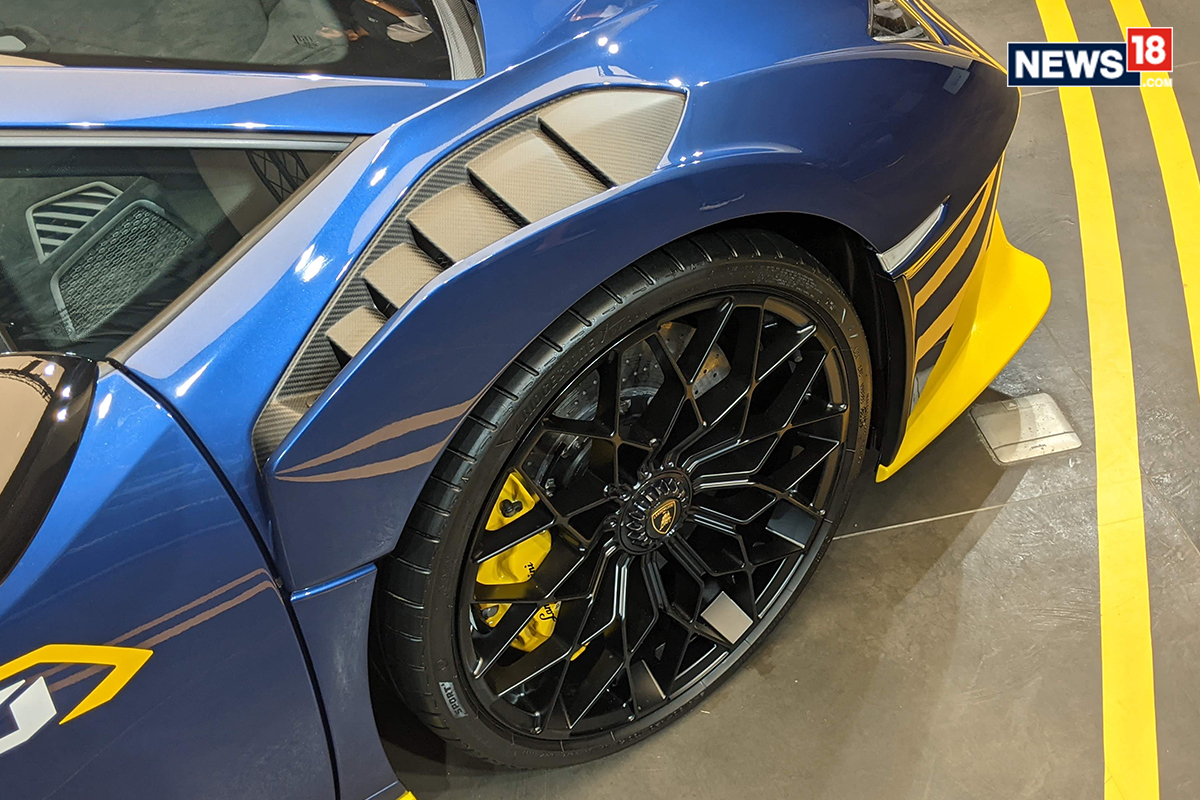 But the changes don’t stop there. There have been numerous chassis updates, there is a wider wheel track, updated steering response that works in tandem with rear-wheel steering, stiffer suspension and a new anti-roll bar design.

The Lamborghini Huracan STO gets three new drive modes as well – the Default STO mode, the Trofeo mode which is the sportiest setting and the Pioggia mode which is meant for tricky weather conditions. All in all, the new Lamborghini Huracan STO is one of the most extreme, performance-oriented and without a doubt, one of the fastest cars that you can buy in India right now.