Only 63 units of the Lamborghini Sian will ever be made. All of them are already sold out.

Lamborghini is one of the last automakers in the world to come out with a hybrid vehicle and rightly so, they are known for being true to ‘raw experience’ that comes with a supercar. Now while most of the people would have said that naturally-aspirated engines are the ones to have in a supercar if you want the ultimate experience, but the fact is that if you want to extract more power from the same naturally-aspirated engine, then using methods like turbo-charging, or as it is the case with the latest Lamborghini called as the Sian, using a hybrid powertrain is the obvious choice. This is the technology of the future and it will play a vital role in taking supercars to the next level. Case in point – the Lamborghini Sian.

Unveiled ahead of its debut that is slated to be at the upcoming 2019 Frankfurt Motor Show, the car is every bit menacing as it looks. This is the first-ever hybrid vehicle made by Lamborghini and it is also the most powerful and the fastest-accelerating Lamborghini ever made. And, before you fret, the company assures that the V12 exhaust note, that it is well known for, has been preserved. 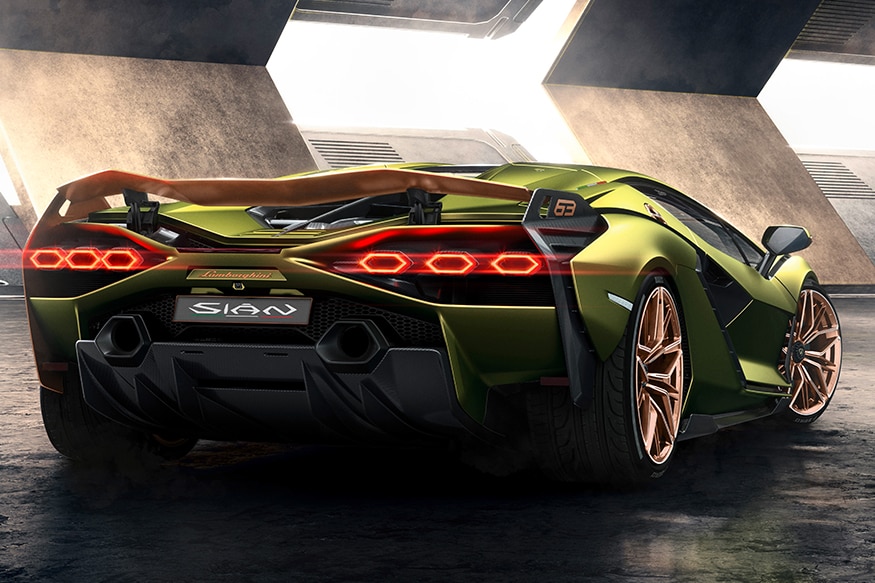 Lamborghini Sian from the back. (Photo: Lamborghini)

It is powered by Lamborghini’s naturally-aspirated 6.5-litre 12-cylinder engine, which also does duty on the Aventador SVJ, but this time around the power output has gone up from 770 hp to 785 hp. Add to this titanium intake valves, a 48V electric motor that makes 35 hp, and the total output from the same engine shoots up to a massive 820 hp. This makes the car capable of going from 0-100 km/h in just 2.8 seconds and will go on to a top speed of over 349 km/h.

The clever bit comes as the Sian uses a supercapacitor instead of a conventional lithium-ion battery to store the power generated by the regenerative braking system while deceleration. This supercapacitor is three times as powerful as a cell of the same weight and three times lighter as compared to a battery of the same weight. Oh and yes, all the energy that is generated is available as a ‘boost’ to the driver whenever needed at speeds up to 120 km/h. And all this aside, have you seen just how maniac the Lamborghini Sian looks like? It’s wedge-shaped, gets six hexagonal-shaped tail lights, massive Y-shaped headlamps, even more massive rear diffuser, air intakes and the front splitter. There is such intricate bodywork to enhance the airflow all across the body of the car that you can look at it for days and still find new design elements that you didn’t know it had.

As is the case with Lamborghinis, the Sian is already sold out even before making its official debut in flesh. Only 63 models will ever be made.