Does it make sense to pay Rs 75,000 more for the XL6 over the Ertiga? We tried finding out in our Maruti Suzuki XL6 test drive review.

When the Indian market is clearly coasting towards an ear of the SUVs, India’s largest manufacturer Maruti Suzuki still holds trust in the dying MPV segment. There are a handful of products in the MPV market priced below Rs 20 Lakh and Maruti Suzuki Ertiga is currently ruling the roster. Realizing the immense potential of a premium MPV in India that is priced competitively, Maruti has now launched the XL6, an Ertiga based premium MPV. Interestingly, the XL6 will be sold through the Nexa chain, highlighting the importance of ‘Premium’ package, Maruti is offering.

That being said, our first look impression of the Maruti Suzuki XL6 has been positive and the car certainly has a road-presence, akin to an SUV. But can the XL6 survive this competitive market ruled by SUVs just by its design or does it offer something else? We tried finding out in our Maruti Suzuki XL6 test drive review-

The idea behind the XL6 as a separate product then the Ertiga is to offer a rugged-looking MPV and Maruti Suzuki has successfully managed to do so. The XL6 has a completely new face with a large and bold grille, flanked by unique quad LED headlights with DRLs. The bonnet line has been raised too and the skid plate adds the SUV touch. Maruti Suzuki has added enough cladding throughout the body to give it a puffed look. 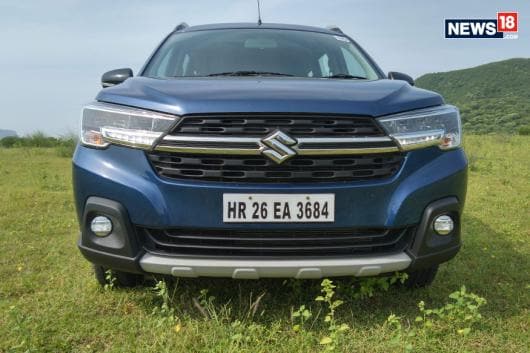 At the sides are the 15 -inch rims in black that have an interesting alloy design but looks small as compared to the massive wheel arches, creating a distraction. Also, the roof rails add to the stance. At the back are the Ertiga sourced massive tail light units, and dual-tone tailgate giving the XL6 a unique look. We drove the Nexa Blue unit and it looked every bit different. However, the cladding has massive panel gaps.

Like the exterior, the interior is also designed to look more premium and upmarket. The cabin gets an all-black theme with a stone finish garnish, which is essentially a black wood finish panel running throughout the dashboard. The infotainment system, the AC unit and Vents, and the instrument cluster are all borrowed from the Ertiga. 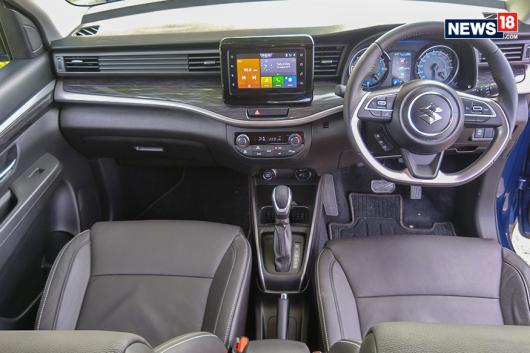 Maruti Suzuki has replaced the bench-type second-row seats with the Captain Seats that has liberated a lot of space inside the cabin and you can slide and recline both the seats. In fact, the name XL6 highlights the leather-wrapped all-black 6 seats. While the front seats are a bit stiff as compared to the Ertiga, the middle row seats are very comfortable.

The middle row also gets the roof-mounted AC vents with the airflow control knob. The position of the AC vents is such that it can throw Air till the third row. There’s no central tunnel hump for easy movement. The problem for any MPV is the accessibility to the third row, which in XL6’s case is easy. You can fold the middle-row seats for easy access to the third row, which is strictly okayish in terms of space for two full-grown adults. 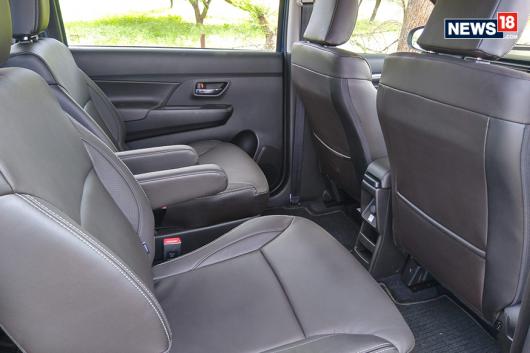 In terms of equipment, the XL6 gets auto climate control, electrically foldable mirrors, cruise control, reverse camera, and SmartPlay Studio infotainment unit which is intuitive to touch. The system has Android Auto and Apple CarPlay connectivity and you can also use Suzuki Connect through an app, which is an e-SIM-based connected technology, though not as good as what rivals are offering.

Practicality wise the Maruti Suzuki XL6 gets wide door bottle holders, armrest storage and air-cooled front cup holders, which is a really nice touch. The boot is only 209-litre and can be extended to 550-litre by flat folding the rearmost seats. Also, the modular boards are a thoughtful design element. In terms of safety, the XL6 gets dual airbags, ABS with EBD as standard along with ESP with Hill Hold. Coming to the driving bit now, the Maruti Suzuki XL6 will only be offered in a petrol motor which is BS-VI ready. The 1.5-litre mild-hybrid engine gets an integrated starter generator and a secondary lithium-ion battery to assist in acceleration. The engine produces 103 bhp of power and 138 Nm of torque and comes mated either to a 5-speed manual or a 4-speed auto gearbox options. This is essentially the same setup as in the Ertiga.

While the power delivery is nice and linear for comfortable city driving, the torque could have been more, giving the XL6 more push while overtaking vehicles. The vehicle is strictly for cruising speeds and any adventurous driving will lead to an uncalled disappointment. Also, the manual gearbox is best suited for high rev driving than the auto gearbox which is very smooth otherwise, but any hard push on the accelerator makes it also clunky and loud. The ride quality is very good and the XL6 eats most of the bad roads with ease. There’s very low body roll and the steering, like all the Maruti cars, is one of the best in the game. You get good feedback and never do you feel tired holding the wheel.

The NVH levels, although are well controlled for most of the city driving, there’s a lot of noise seepage inside the cabin anything above 90 kmph. There’s also an underlying grunt that adds to the sporty bit, but is not good for people who are trying to sleep on the back seat. While Maruti claims an 18 kmpl mileage for automatic XL6, we got close to 11 kmpl during our drive. The Maruti Suzuki XL6 is like old wine in a new bottle. Apart from the design which is now more attractive and a 6-seater plush cabin, it’s more or less the Ertiga underneath. But Like old wine, this car feels more mature, more refined and more personal. Maruti Suzuki will sell the XL6 through the Nexa network and has priced it at Rs 9.8 Lakh, which is a good Rs 2 Lakh expensive than the Ertiga’s base model. However, a similarly equipped model is still Rs 75,000 less than the XL6. The question then is, does it make sense to pay extra over the Ertiga? For us, it certainly makes sense to get a BS-VI vehicle with better looks both inside-out by shelling out some extra bucks.