Meet 'Lun', The Spaceship Inspired Ship-Airplane That Shook Area 51 and Is Now Moved to Derbent

The dilapidated aircraft has made it to the headline once again after reports suggested that it was being moved to the city of Derbent in Russia. Hence, a detailed look over the aircraft was in order.

If history dictates anything, it is that warfare births the best innovations. Our first exploration to space was an evident result of fear of missiles that could travel massive trajectories. A page from the same book is a Soviet Union superplane that gave many sleepless nights to the agents at Area 51.

‘Lun’ which translates to Harrier in English is defined as a person who engages in persistent attacks on others or incursions into their land. Justification to its name, check. The ‘Lun’ was a result of Soviet Union’s famed Ekanoplan project that aimed at building aircrafts that could conquer air and water alike.

The dilapidated aircraft has made it to the headline once again after reports suggested that it was being moved to the city of Derbent in Russia. Hence, a detailed look over the aircraft was in order. The Lun was actualised in the year 1987. It was an improved successor over the KM that rattled the CIA the first time it was spotted. The KM in comparison to the Lun was bigger and meaner. The CIA analysts who spotted the KM for the first time in the Caspian Sea were bewildered by its sheer size and speed and found it appropriate to name it as the Caspian Sea Monster.

To dig up more info about the same, CIA ordered the development of an unmanned reconnaissance drone that would keep an eye on the project. The drone was solely developed for the mission and was named as the Aquiline. In 1966 when the KM first skimmed the Caspian Sea, it was the largest plane on Earth. The airplane measured 295 feet in length and could carry upto 600 tonnes of weight at a time. The full-form of KM stands for prototype in Russian and it was truly anything but that. The plane’s demise came during the 1980s after a pilot error sank it in the ocean. 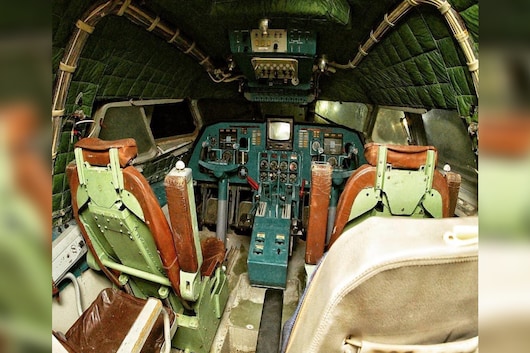 The Lun was its successor, a more improved iteration that was built KM’s flaws in mind. The plane which measured 240 feet in length can be spotted on Google Maps and is about the same size as a 747. However, unlike its predecessor, the Lun’s combat equipment were its piece de resistance.

The Lun carried six P-270 Moskit anti-ship missiles which is capable of being launched while being airborne. The missiles can reach Mach 3 (thrice the speed of sound). At the time the most powerful missile of the US was the Harpoon missile. Coming in at such high speed, the Moskit will be within the range of a ship’s artillery for less than 30 seconds before impact. In comparison, the Harpoon gives defenders two minutes.

The Lun had a maximum range of 1931km and could carry 15-person for five days. A few of the features that makes the Lun a little more than a piece of aeronautical scrap is the fact that unlike other GEVs, the Lun could exceed 15 feet of its ideal flying height.

The aircraft’s low cruising altitudes are below the range of most radar and their aerodynamic extra lift meant they could carry heavier cargo than conventional craft of the same size and can be up to 35 percent more fuel-efficient.

They can take off and land in the water, averting the need for runways or docks.