After the success of the Hector, MG is ready to launch their next car in India in January 2020 and it will be this, the MG ZS EV. Is this too on its way to be a runaway success? Could this be the electric car India has been waiting for? We find out by taking it out for a drive.

When I say the words Morris Garages or MG then there are two possibilities that you might think of. If you are an auto enthusiast then you might know them for making fun to drive cars that MG used to make back in the day. But if you believe in saying “OK, boomer!” then you might know them for being the makers of the Hector. But now, MG is preparing its third identity for years to come in the form of six letters – MG ZS EV. So without a doubt, there’s a lot of responsibilities that lie on this car’s shoulders, and hence, this car is really special.

First thing first, if you are expecting the MG ZS EV to be as big as the MG Hector then well, it’s not. For reference, think of it as being around the size of a Hyundai Creta. In terms of design, what works in its favour is that everything looks proportionate and bang on in terms of size. It also gets a grille which gives the car a face which brings a sense of familiarity to those looking at it. And when you press the MG logo, well, it pops out to unveil the charging socket. 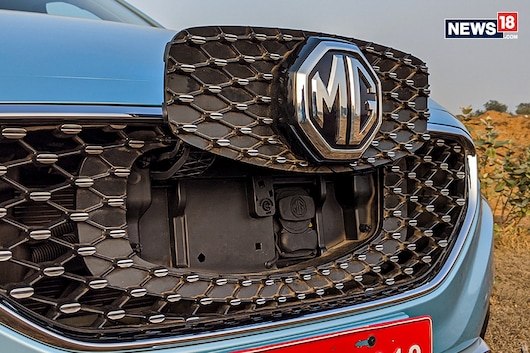 And this is exactly why this car is so important - this is an electric SUV.

This brings us to the electric bits. The MG ZS EV is powered by a 44.5 kWh battery that claims a range of 340 km on a full charge. And talking of charge, there are four ways you could do that. You can charge it through a regular 15-ampere socket in case of an emergency which takes many many hours to charge to full but will get you the extra range in case of an emergency. Then, there’s also the 7.4 kW AC charger that MG offers along with this car and will install it for free wherever you want. This takes about 6-8 hours to charge the car from 0-100 per cent. You can also use one of the DC fast chargers which will also be available at major MG showrooms. This can charge the car from 0-80 per cent in just 50 minutes. And finally, if all else fails and you have no way to charge your car and have run out of juice, MG will send a van which will come to you and charge your car to give you about 30 km of range, no matter where it is.

But what I liked, though, is that the ZS EV does not scream and shout that look this is an eco-warrior but rather, barring the two badges on the car that read EV and electric, it looks normal. And I feel that this is going to be one of the reasons that make people warm up to it quicker than other electric cars that pull out all the stops to look futuristic with the likes of loud graphics and end up being a bit unnecessary.

And this feeling of familiarity carries on to the inside as well. If you have sat in a premium Volkswagen or an Audi before, well, the cabin will seem familiar because you can recognize some elements from those cars. The reason is that MG’s parent company SAIC works hand in hand with the Volkswagen group. Volkswagen also owns Audi and you can see all of that friendship coming together to shape up the cabin of the MG ZS EV. As a result, the highlight of the cabin is the build quality and how well everything has been put together. You get a soft-touch finish on the top of the dashboard and overall, it’s a pleasant place to be in.

Talking about the touchscreen infotainment system, well, it’s not as big as the one on the MG Hector but it gets the job done. It’s not ridiculously huge and I like it that way. And yes, this too is filled to the brim with features. 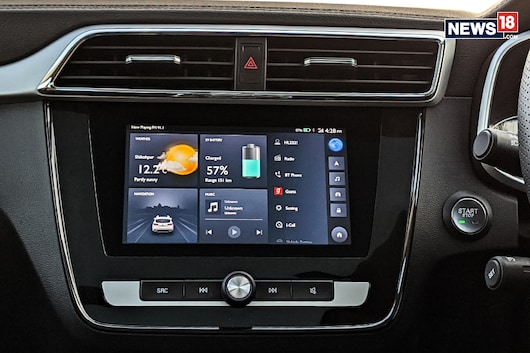 The infotainment system in the ZS EV is an update to the one we saw in the Hector. This gets the i-Smart 2.0 ecosystem which means that it has a better design that is a lot more intuitive to use and this screen has a good touch response as well. And this time around it uses higher internal specs for more local memory for your downloads too. For example, you could download up to 10 songs offline in your Hector but in the ZS EV, that limit has been bumped up to 100.

And since this is an electric car, it now shows a lot of EV-specific features like the range that you have left and thanks to the in-built e-Sim, it can also lookup charging points near your location. What’s also new is that this system can now connect to an external Wi-Fi for better internet speeds.

There is also support for Android Auto and Apple CarPlay and there are other goodies too in the form of the 6-way electrically adjustable driver seat and the heated ORVM in the top-spec variant.

The highlight for me, though, is that the car gets an in-built PM 2.5 air filter which cleans the air quality inside the cabin and is going to be helpful in cities like Delhi, where we drove the car.

There are enough compartment spaces too and the driving ergonomics leave nothing to complain. Your key takeaway from the interiors will be the feeling of spaciousness at the front.

A big reason for the feeling of spaciousness that you get inside the cabin is that well, you don’t have a gear lever. Instead, you get a knob which helps you select between Park, Reverse, Neutral and Drive. How it works is that you rotate the knob to select whatever mode you want to be in and you press the knob to be in Park mode. On top of the knob, you will see three really interesting buttons. On the left is the mode button which lets you choose between three driving modes – Eco, Normal and Sport. In the Eco mode, you would expect the car to be dialled down or maybe be become a bit dull but that’s not the case, the car has so much torque on offer that even in this mode, you have ample acceleration which makes the car feel just alright in city driving conditions. The Normal mode makes the car feel a bit more alive and the Sport mode is really where you feel the electric power kicking in – instant torque, the moment you put your foot down on the accelerator and that I like.

Next to it is the button for the KERS which stands for is the Kinetic Energy Recovery System. Now here, you can select three levels of KERS – 1, 2 and 3. If you are in level 1, the car mimics the engine braking that you get in regular internal combustion engine-powered cars, so there’s nothing out of the ordinary. In level 2, the engine braking is taken up a notch and in level 3, it almost feels like the car is applying the brakes softly, whenever you take your foot off of the accelerator pedal. The main function of this system is that whenever brakes are applied, there is a lot of kinetic energy that is generated. Usually, this goes to waste but this system takes all of that energy, recovers it and sends it back to the battery to give you that extra little bit of range. Handy.

So while there’s plenty for those seated at the front, there are some good bits for those at the back too. It feels spacious, airy, and a big reason for that is the humongous glass roof on top. It’s so huge that it almost takes up the whole of the roof - 90 per cent to be precise. 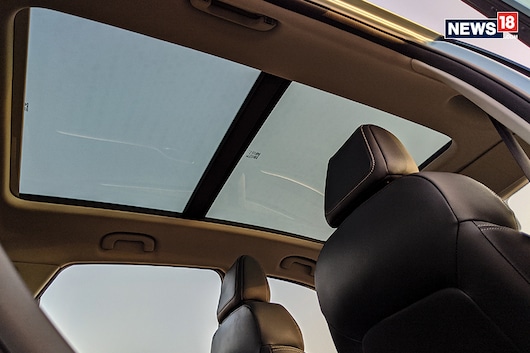 What I did miss was the armrest for rear-seat passengers and there are no rear AC vents either.

But none of this matters if the car, electric or not, does not do a good job at being a car. And I’m happy to report that the MG ZS EV is a good car to drive and be driven in as well. The ZS EV makes 142.7 PS of power and 353 Nm of torque. Being an electric car, there are a few key differences that you will experience. First is that the car is eerily silent when being driven as there’s no engine or exhaust. What you get instead is the soft hum of the motor as you go along. This ends up making all the other sounds feel louder, like the wind noise and tyre noise despite the car having noise insulation at par with other offerings in its segment. And since there is a floor full of batteries underneath, the car has minimal body roll like unlike what you see in an SUV of this size. But to offset this weight of the batteries, the suspension has been set up on the stiffer side. So while you get calm and composed cornering, you do feel the large potholes that you didn’t slow down for. 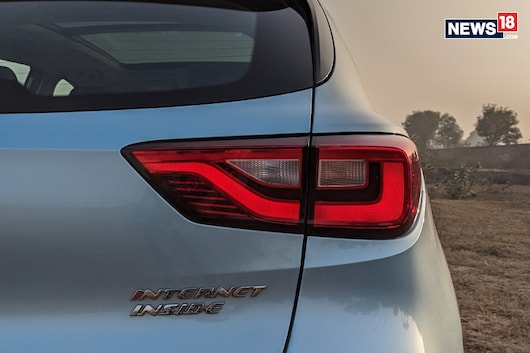 And finally, the MG ZS EV is a quick car. Not to be confused with fast. It accelerates unlike any other car out there and that makes the car fun to drive. MG says that the ZS EV can do a 0-100 km/h in just 8.5 seconds but what it doesn’t tell you is how the ZS EV pulls from city speeds to highway speeds in almost no time!

But once you get used to it, once you recalibrate yourself to the throttle response, well, the ZS becomes like every other car that you have driven. Just a lot quieter and a lot quicker. And that in my books is a win-win. But to answer the big question – what lies in the future for the car from the future? Well, MG is taking an all-around approach and making sure that they cover all the bases for the people who will be buying this car and are the first ones to hop on to the EV bandwagon. But talking about buying, we don’t know what the price of this car will be yet. For that, we will have to wait until January 2020. But as of now, the bookings are open and the company says that there is a lot of interest around this car. So if they get the pricing right, as they did with the MG Hector then who knows, this just might be the car for your future.