The Mi Portable Electric Air Compressor impresses with the promise of portability and wireless operation which makes it a breeze to use whenever needed.

A portable air compressor is a great thing to have as it gives you the peace of mind, that, if you were to find yourself caught in a tricky situation, you have something that could help you get out of it. And for most people, it is this peace of mind that is a factor for buying a portable air compressor. Mi started a crowdfunding page for this portable, electric air compressor to see what people think about it and set a goal of 4,000 units which it believed would be enough to convince it to put the device into mass production.

Currently, they have met their target by 239 per cent as it found 9351 supporters and 9597 funders for the product, during the set time frame when the crowdfunding page was live. And as we found out, the compressor offers pretty much everything you would want from it. Currently retailing for Rs 2,299, the Mi Portable Electric Air Compressor (yes, that’s the actual complete name of the product) comes with a soft-cloth carry bag and an air needle. This bag has an extra pouch inside that closes securely by Velcro and lets you store this air needle that is meant to help you fill footballs, basketballs or other kinds of balls. It is also big enough to keep the charging cable inside it as well, which is a nice touch by Xiaomi.

With that done, let’s talk about the compressor itself.

As you would have noticed from the top-most image in this story, the compressor is quite portable and fits in the palm of your hand. It’s still very sizeable, though, and it weighs 547g which is still light as compared to other air compressors that you get in the market.

The compressor turns on when you pull the air hose out, which is nicely marked with a red circle around it, to let you know which side to pull it out from. And it is here, at the top, that you would see that the compressor comes with an in-built flashlight which is very helpful as you don’t have to rely on your phone’s torch when you are trying to screw the hose in into the tyre valve at night. 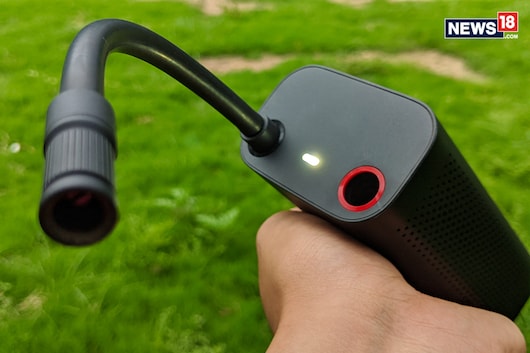 You can use the first-gen iPod-like controls at the front to operate the compressor. The controls are simple and intuitive to use and you would take about a minute to understand all the operations that you can do with it. The left button is to turn the flashlight on or off and the right button lets you switch between different modes that the compressor has, which is four to be precise – cycles, two-wheelers, cars and balls.

Say, for example, you want 33 PSI to be filled in your car tyre. You select the ‘car’ mode, set the required tyre pressure and press the middle circular button to start filling in air. The compressor will auto-cut once it reaches the pre-set air pressure so you don’t constantly need to keep a tab on the device to see whether it overfills the tyre.

And yeah, that’s pretty much how simple and straight forward it is to use. And the fact that you have a huge digital display just makes the entire operation a lot smoother and it is also easier to keep a tab on the air pressure as opposed to reading it through an analogue gauge. And yes, the display has decent visibility under bright daylight as well.

Other things that you need to know is that all air compressors are loud. This is one is too, but lesser than others. To put it in numbers, Mi says that it is less than 80 dB of noise at a distance of 1 metre while pumping air.

And this brings us to another aspect about air compressors that you need to know, when they are pumping air, the working cylinder can often create a lot of vibrations which is not a good thing to have. In some of the most accessible compressors that you can buy, the vibration is so bad that they will vibrate to a different location altogether than where you left them when you started pumping air. Thankfully, that has not been the case with the Mi compressor as it handles the vibrations extremely well.

The compressor does not get hot either as it has proper ventilation. 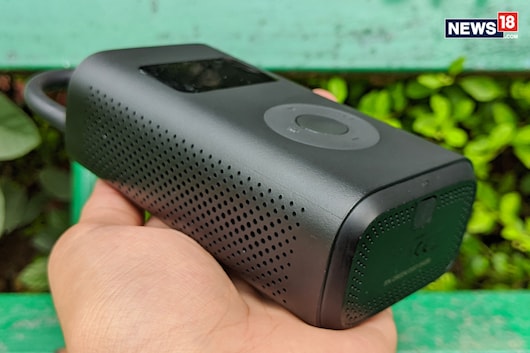 And now, let’s come to the best part about this compressor – it is battery powered. You don’t have to worry about plugging this in into a 12V power socket for it to run. It has a 2000 mAh battery inside it which takes about three hours to charge from zero to full and is good to let you fill four completely flat car tyres in one charge.

And let’s be honest, you won’t actually be filling four tyres in one go as more often than not, most of the flat tyre situations that people have are either with a single tyre or two tyres. Chances of having all four of the tyres flat at the same time, along with your spare tyre being flat too, is highly unlikely. Although, even if that were to happen, if the device is fully charged, you’ll be alright. For cyclists and motorcyclists, this won’t be an issue altogether.

And yes, even those with bigger tyres on their cars need not worry as the compressor can fill tyres up to 145 PSI. 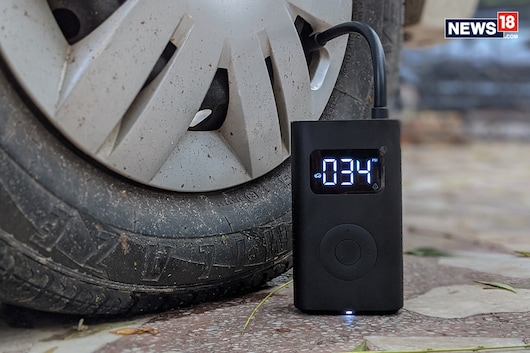 It’s not all perfect with the Mi Portable Electric Air Compressor, though. First and foremost, despite having a digital display, you have to guess the battery charge that is left through a small light that is placed at the bottom which shows different colours at different charge levels. This is a big miss and there should have been a digital battery percentage readout built into the device as, let’s be honest, it has a battery inside it at the end of the day and that will lose charge over time. And that means you’ll have to make sure you keep it charged up time and again so that you have enough juice in it when you need to use the device. And we can all make do with lesser things that need to have a check on their battery percentage.

And this brings us to the next aspect, the device is charged through a micro-USB port and I feel that it should have been a USB-C port instead. As if you’re someone like me, you don’t buy air compressors very often and if you buy this one, you’ll be keeping it for years. And since all things are moving to USB-C, keeping a micro-USB cable to charge the compressor will eventually become a hassle.

And lastly, the device only fills air through the inbuilt battery and not when it is plugged in. While this can be seen as a negative, I don’t think that this should be a problem because you would buy this device for it is a wireless, battery-operated machine in the first place so you know what you’re getting into. 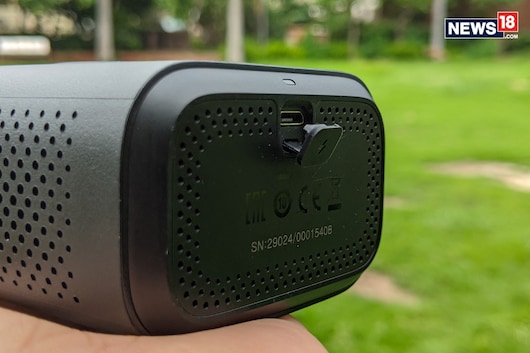 Lastly, to sum up, I’d have to talk about different case scenarios as that vastly changes the value for money that Mi Portable Electric Air Compressor brings to the table.

This is highly recommended for cyclists as it can be carried with ease in your bag pack if you are going for long rides. The filling up of tyres is quick and you can do it multiple times after charging it once. The same applies to motorcyclists too.

Additionally, if you are someone who is into off-roading then this is perhaps the perfect thing for you. You see, when you do want to go off-road in a motorcycle or a car, you need to deflate the tyres a little bit in order to have more of the rubber in contact with the ground for better traction. However, once you are done off-roading, or done with the trail, you will almost always have to take the paved road back home, and for that, you need properly inflated tyres. And since it is only a few PSI that you would have deflated in the first place, you can quickly top up the tyres after your off-road session and head back home. You can even help your buddies with the same, all of which, using this device. 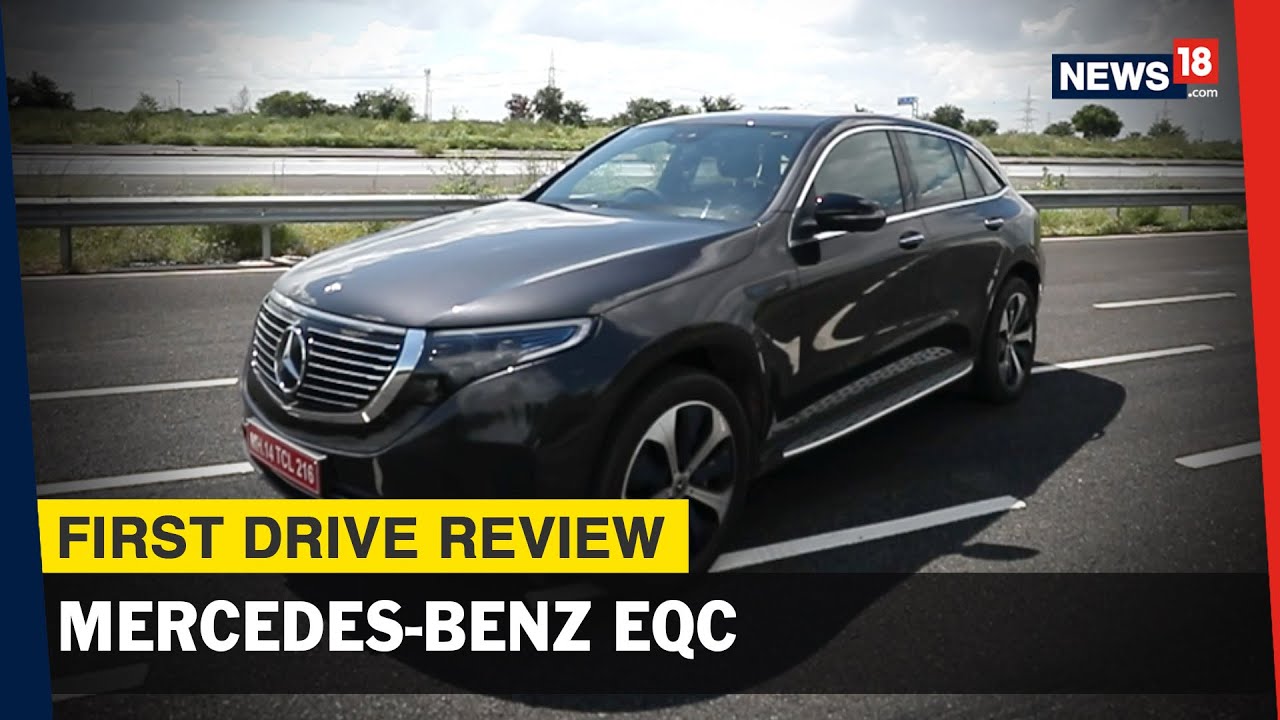 Lastly, if you are just buying it as a safety measure for your car for the inevitable flat tyre, then you can perhaps look at options that cost less as they will do the job too. However, keep in mind that they won’t be as easy to operate, as refined as this Mi, have a digital readout of air pressures and this portable – and it is for these features that the Mi demands a premium. The only thing you need to be okay with is to charge the device up once every couple of months, that’s all.

So at the end of the day, the Mi Portable Electric Air Compressor is a well-rounded device that fulfills several requirements and if you are okay with spending a bit extra for some premium features, then this is highly recommended.