Here's a list of all the efforts taken by the Government of India to promote electric vehicles in India, including electric trains, electric buses and electric cars.

According to a study by the World Health Organization, 9 out of every 10 people in the world breathe air that contains high levels of pollutants and kills 7 million people each year. Vehicular pollution has been a major source of air pollution and efforts are being made on a global scale to reduce the vehicular pollution as much as we can in the shortest possible time span. Electric vehicles are one such way to tackle the rising pollution levels.

However, replacing the conventionally fuelled vehicles (gasoline/ diesel/ CNG) with electric vehicles needs a lot of R&D effort, infrastructure cost and willingness of consumers to spend extra on e-vehicles. In a market like India, all three possibilities will take years of hard work and effort from governments. What can be done, though, is chart and implement a credible EV policy so that consumers have confidence in EVs.

Prime Minister Narendra Modi led Government of India is giving a serious push to the clean mobility initiative in the country. Recently, GST cuts were announced on EVs. PM Modi also flagged off a one-off electric locomotive that has been converted from a diesel engine. The Government also announced that they are planning to install electric chargers every 25 km on the road.

Here’s a list of all the efforts taken by the Government of India to promote electric vehicles in India, including electric trains, electric buses and electric cars! 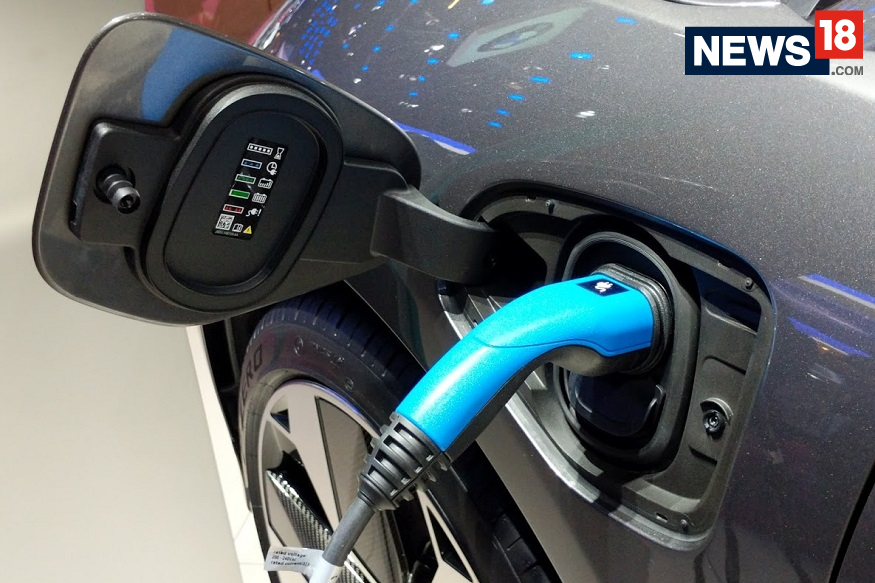 In a bid to push electric mobility, the GST Council has decided to reduce tax rates on electric vehicles from 12 per cent to 5 per cent and when it comes to the EV chargers that are required to charge these electric vehicles, the tax rate has been reduced from 18 per cent to now 5 per cent. The new rates will be effective from 1st August 2019. The council further approved an exemption from GST on the hiring of electric buses by local authorities.

Push for Electric Cars and Bikes

In response to a question in the Rajya Sabha, the Ministry of Road Transport and Highways led by Union Minister Nitin Gadkari listed all the steps taken by the government to promote the use of electric vehicles in the country. Here are a few of them –

- To provide EVs with a distinct identification, the registration mark for battery operated vehicles is to be on a plate with green background

- To encourage the usage of electric two-wheelers of up to 4.0KW motor, the ministry has allow granting licence to age group of 16-18 years to drive gearless e-scooters and bikes

- Indian Space Research Organisation (ISRO) has commercialized the indigenously developed lithium-ion battery technology and has already selected 14 companies for transfer of technology, which will promote localization of the technology, thus lowering the TCO for EVs. A bus has to run a limited kilometers a day (Say 200km) and can be charged by a charging station in the depot itself. The Government of India has realized the potential of electric buses and pushing for more and more e-bus to ply on roads. The Ministry of Urban Development of the country recently launched the Green Urban Transport Scheme (GUTS) with the aim to reduce carbon emissions from the public transport vehicles in the country. The ministry proposed an INR 250 billion grant for developing electric vehicles for public transport.

And a lot of state governments are also supporting the cause. Electric bus manufacturers like Ashok Leyland, Goldstone Infratech, Tata Motors, JBM Auto, Solaris, BYD are all working with various state governments to electrify our public transport. Cities like Lucknow, Delhi, Sabarimala, Hyderabad have started the electric buses on trial basis or have started full-fledged commercial operations.

The government's premier think-tank body, NITI Aayog has taken an initiative to provide a Model Concessionaire Agreement (MCA) document for introducing electric-bus fleet in cities for public transportation on Public-Private Partnership (PPP) mode on operational expenditure (per km basis) model rather than paying the upfront capital cost. This move is said to enable manufacturers as service providers, thus leading to lower capital expenditure for the government. For promoting the adoption of electric mobility in the country, the government had launched the Phase-I of FAME India Scheme [Faster Adoption of Electric (&Hybrid) Vehicles in India] with effect from April 1, 2015. This was initially for a period of two years and has subsequently been extended till March 31, 2019. All electric and hybrid vehicles, including public transport, registered under the scheme are being incentivised under the demand-creation focus area of this scheme.

The second phase of FAME India scheme to boost clean mobility has an outlay of Rs 5,500 crore spanning five years. The scheme in its second phase will offer a bouquet of incentives, such as exemption from paying road tax, registration fee and parking charges for various categories of electric and strong hybrid vehicles.

The second phase of the scheme will be rolled out through verticals including demand incentives, a network of charging stations, pilot projects for innovative proposals, technology, technology platform for e-mobility, and its administration. In a first, the Indian Railways has converted a diesel locomotive into an electric one, as part of efforts to completely electrify the broad gauge network. Prime Minister Narendra Modi also flagged off an electric locomotive converted from a diesel engine at the Diesel Locomotives Works (DLW) in his constituency of Varanasi.

The work on the project began on December 22, 2017, and from concept to execution of the conversion of the diesel locomotive to electric was carried out in just 69 days, railway officials said. In keeping with the Indian Railways' Mission 100 per cent electrification and de-carbonization agenda, DLW has developed a new prototype electric locomotive converted from diesel locomotive.

As per NITI Aayog, India will need 60 GWh by 2025 and 120 by 2030. The good news is, India is in the process to get 10 GWh producing plants by 2020. Three different Lithium-ion battery (Li-ion) manufacturers are expected to set up their facilities with a combined capacity of 10 gigawatt in Telangana soon, with an investment of Rs 1,500 crore in the first phase. Director of Electronics, Telangana, Sujai Karampuri, withholding the names of the companies, said the construction of three different facilities is expected to begin in a month or two and production of the cells would begin between nine to 15 months after that. He also indicated that the initial production capacity would be ramped up from one gigawatt in the phase one to 10 gigawatt in the due course with a total investment of Rs 6000 crore.

On the other hand, state-run BHEL and Libcoin are in talks to form a consortium to initially build a 1GWh lithium-ion battery plant in India, the government has said. The plant's capacity will be scaled up to 30GWh in due course.

With Inputs From Agencies