It's claimed that two different powertrains are under development and both of them will benefit from the new ERS system.

A new Alfa Romeo Giulia coupe is said to be under development, and according to Autocar magazine in the UK, the new models will feature a Formula 1-inspired energy recovery system (ERS) and some very impressive power ratings.

It's claimed that two different powertrains are under development and both of them will benefit from the new ERS system. The first of the two is based on the 276 bhp 2.0-liter turbo currently found in the Giulia Veloce sedan, while the other is said to be based on the 2.9-liter turbo V-6 from the Giulia Quadrifoglio.

These upgraded versions are said to produce some very impressive performance figures, with the 2.0-liter unit developing around 345 bhp and the V-6 offering a mighty 641 bhp. If the V-6 does produce that amount of power it would make the car it will be fitted in the most powerful road-going Alfa Romeo ever, and it would be producing only 20 bhp less than the 661 bhp of the Ferrari 488. 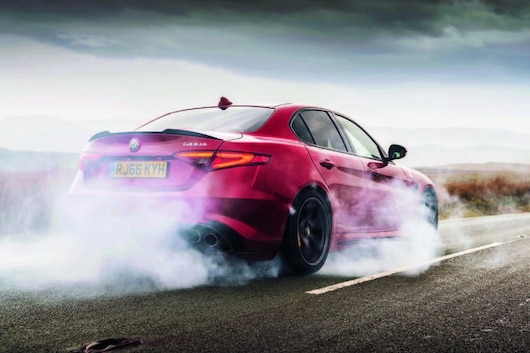 This would make the new Giulia considerably more powerful than the cars we'd currently see as its main rivals. For example, the BMW M4 DTM is rated at 493 bhp, the Audi RS5 at 444 bhp, and the Mercedes-AMG C63 S Coupé, which is the closest but still well-short, is rated at 503 bhp.

It's thought the new Giulia will appear before the end of this year but won't go on sale until sometime in 2019, potentially badged as the Sprint, although enthusiasts would suggest GTV might be a whole lot more historically appropriate.

The coupe is derived from the existing Giulia sedan, and although the forward exterior panels are likely to carry over, there will be a new roofline, different rear quarter panels, and longer doors to make accessing the rear seats a little easier. It's also expected a new front fascia will be introduced to distinguish the coupe from the sedan.

As for the ERS itself, it's expected to be a development of the HY-KERS set-up produced by a combination of Ferrari and Magneti Marelli for the LaFerrari, which is claimed to be even more advanced than the type used in Ferrari's F1 cars. And of course, this system is very much performance rather than economy and emissions oriented.