The new Maruti Suzuki Vitara Brezza now gets a BS-VI 1.5-Litre petrol engine for the first time, updated looks and some feature-job. Here’s how good the new car is.

The design of the Maruti Suzuki Vitara Brezza was always a no nonsense well proportionate design that caters a wide age group. The updated 2020 Brezza carries forward the same language as before, without much changes to the exterior. The only visible change in the design you see between the old and new Brezza is the front profile, the alloy wheels and new colour options.

Since most of the changes are in the front, you get a sense of newness with the 2020 Vitara Brezza. There’s a new grille with a big chrome plate with design elements nicely integrated with LED headlamps with dual projector headlights. The bumper is also new and the brushed scuff plate adds to the mass. At the sides are the new 16-inch black toned precision cut alloy wheels and the rear gets LED tail-lamps and like the front a larger scuff plate. Overall the car looks attractive and sharper than before. There are also a couple of additional youthful colour options and my favouite has to be the new Autumn Orange roof scheme.

Maruti Suzuki Vitara Brezza is all about being simple yet effective and the cabin highlights this simplicity. Both the new and old Brezzas have a very basic yet functional layout, no adding random buttons here and there. And on the top of that the ergonomics of Maruti Suzuki are top notch. You feel like you are in command which adds a confidence while driving. What’s missing however, is a sunroof. 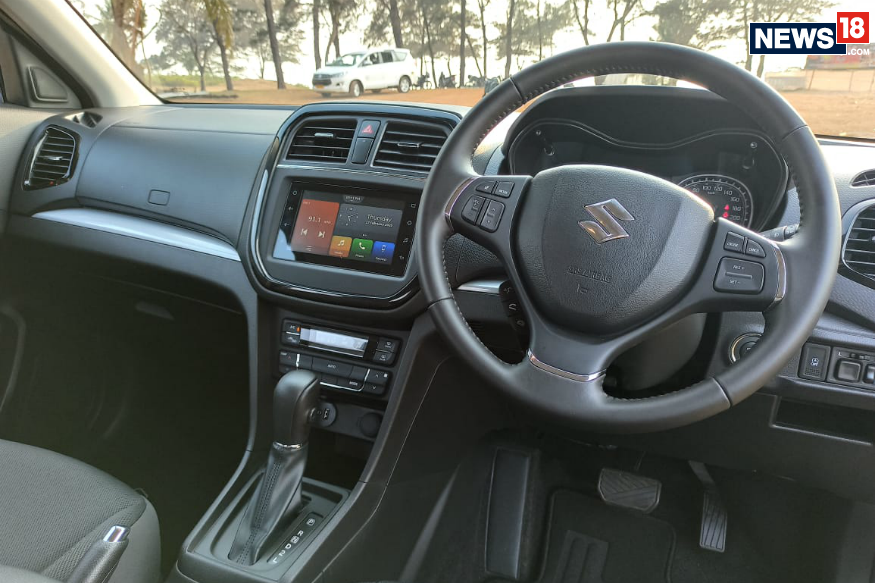 While the interior is exactly the same with a dark theme and few hints of greys, the dashboard now gets Maruti’s latest SmartPlay Studio touchscreen infotainment system. The new unit has a very user friendly interface with large fonts, touch response has improved and it also gets live traffic updates. That being said, there’s still no eSIM-based connectivity unlike the rivals.

In terms of practicality, there are lot of storage spaces throughout and the upper glove box gets air cooling. The seats are as comfortable as before and like I mentioned before, the ergonomics of Maruti Suzuki are such that you won’t get tired in a long drive. The space is also generous for 5-full grown adults. The boot is wide and deep with a low loading height for heavy stuff. The biggest change in this new Maruti Suzuki Vitara Brezza has to be the 1.5-litre mild hybrid BS-VI petrol engine. It produces 103 bhp and 138 NM of torque and gets a 5-speed manual and a 4-speed automatic gearbox as an option. Maruti will no longer be selling the famed 1.3-litre DDiS diesel engine anymore, which means you have to compromise on the mileage. That being said, the petrol engine delivers 17.03 kmpl in the manual and 18.96 kmpl in the automatic version, which are not bad numbers for a car of this size.

The 1.5-litre naturally aspirated engine, as we have tested in the Maruti Suzuki Ciaz sedan, is a city friendly unit and is smooth and refined for daily running. Since its not diesel, we missed that mid torque for overtaking the high speed traffic. Having said that, it’s still a good enough reason to buy the car and the biggest highlight has to be the refinement. We were in Goa driving this car, and didn’t get much time pushing the Brezza to the speed limit, but occasionally we were able to touch three digits speed and it was not that tough reaching it. To reach these speeds, the SUV doesn’t feels out of breath. We drove both the manual and auto gearbox Brezzas and my inclination is towards the 5-speed manual gearbox that’s a gem to operate. It’s light, easy to shift and responds well. The 4-speed AT, on the other hand, replaces the AGS gearbox. The gearbox is smoother than the earlier unit, but feels a bit jittery when trying to achieve certain performance. The steering is leather wrapped and feels chunkier to hold. As always, since it’s a Maruti steering, it’s well balance, light and agile. The suspension is also tuned well for bad patches and soaks up most of the bumps.

The new Maruti Suzuki Vitara Brezza also gets the mild hybrid SHVS technology with an integrated starter generator, auto start stop function and a lithium-ion battery. In terms of safety, the Vitara Brezza is the safest Maruti Suzuki car and retains dual airbags, ABS with EBD among other safety features. The Maruti Suzuki Vitara Brezza was, and still is one of the most well balanced small SUVs you can buy in India. Even though it's roughly priced Rs 50,000 than the rivals (base petrol model), the engine now is bigger and powerful, the space inside is as generous as before and what you get is a hassle free driving experience. Basically, buying a Maruti Suzuki Vitara Brezza is like investing in a debt mutual fund, on which you can place your money and forget about it.