Nissan's latest Star Wars-themed custom show vehicle lands on the Hollywood red carpet at the world premiere of "Solo: A Star Wars Story’. Based upon the brand's best-selling 2018 Nissan Rogue, the custom show vehicle takes inspiration from the iconic Millennium Falcon featuring elements from the most-capable ship in the galaxy.

"As the third installment of our own trilogy of collaborations with Lucasfilm, we raised the bar delivering our best custom show vehicle yet," said Jeremy Tucker, Nissan's vice president of marketing communications and media. "We started with the best-selling Nissan Rogue and worked with the talented concept designers at Lucasfilm and ILM. Then we turned to the experts at Vehicle Effects bring it to life. The result is hands-down the most complete and thrilling vehicle we've ever done."

The Millennium Falcon-inspired Rogue is the most extensive Star Wars-themed Nissan custom show vehicle build to date, practically appearing as though it flew right off the screen. In addition to a fully customized movie-inspired exterior, for the first time, this Star Wars-inspired Nissan receives a full interior makeover channeling the iconic cockpit of the Millennium Falcon. 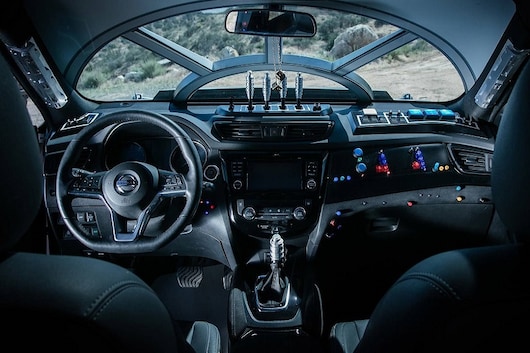 The exterior gets custom handcrafted aluminum body panels mimicking the Millennium Falcon, while 3D-printed inserts bring another level of immersive depth to the project. A roof-mounted radar dish and laser cannon appear as though they were lifted right from the movie set. Up front, the multi-pane windshield clearly resembles that of the on-screen hero.

But the rear of the craft is where all the magic happens. The subspace-hyperdrive unit spanning the entire width of the Rogue appropriately glows blue, while a trio of high-mounted Bose speakers and an 18-in. Bose subwoofer provide the aural experience. Inside and out, the Bose system delivers an impressive 1,500 watts.

Custom fabrication for the Millennium Falcon themed Rogue was completed at Vehicle Effects in Burbank, California. "Solo: A Star Wars Story" will release in theaters on Friday, May 25.