Pioneer DMH-ZS9350BT Touchscreen Infotainment System Review: Is it Worth Rs 79,990?

Buying a car has never been easy and it only seems to be getting tougher by the year as technology keeps making bigger leaps and the kind of features that a car offers vastly improves in a time shorter than ever before. One of the technologies that we use in our cars the most is the touchscreen infotainment system which is our gateway to every other feature that a car offers. And it is here that a car starts showing its age as the years pass and also the area which differentiates the high-spec variants from the entry-level variants. But what if there was an aftermarket touchscreen infotainment system that offered the best and the latest experience that one can have in a car, whatever the price of the car maybe? Well, that is what the Pioneer DMH-ZS9350BT appears to be. Towards the end of 202, we extensively tested this system and it was one of the best systems we tested all year.

Let’s start with its biggest positive which has to be the suite of wireless connectivity options that the system has. And this is the biggest differentiating factor for this model as well. Firstly, the DMH-ZS9350BT has Amazon Alexa built-in which opens up a host of features that you can access through voice commands. Anything that an Alexa can do, like communicating to another Alexa-integrated device at home, giving you answers based on internet search results, adding things you need to buy from Amazon to your cart to simply playing your favourite music – all of it is available. Next, you also have Wireless Android Auto and Wireless Apple CarPlay which is a feature that is rare in other infotainment systems, irrespective of the price. This allows you to connect your iPhone or an Android device with the system without the need of having it connected through a wire and that goes a long way in decluttering your cabin.

This also basically gives you an identical interface to your iPhone or the Android device that you use and subsequently, gives you access to features like audiobooks, calendar, Google Maps, messages, calls and so much more. And yes, if you are not into using Alexa as your preferred voice assistant, you can use Siri or Google Assistant for all your needs.

Couple this infotainment system with a car that has wireless charging too and you have an experience unlike any other car out there.

And the good things about the DMH-ZS9350BT does not stop here, either. 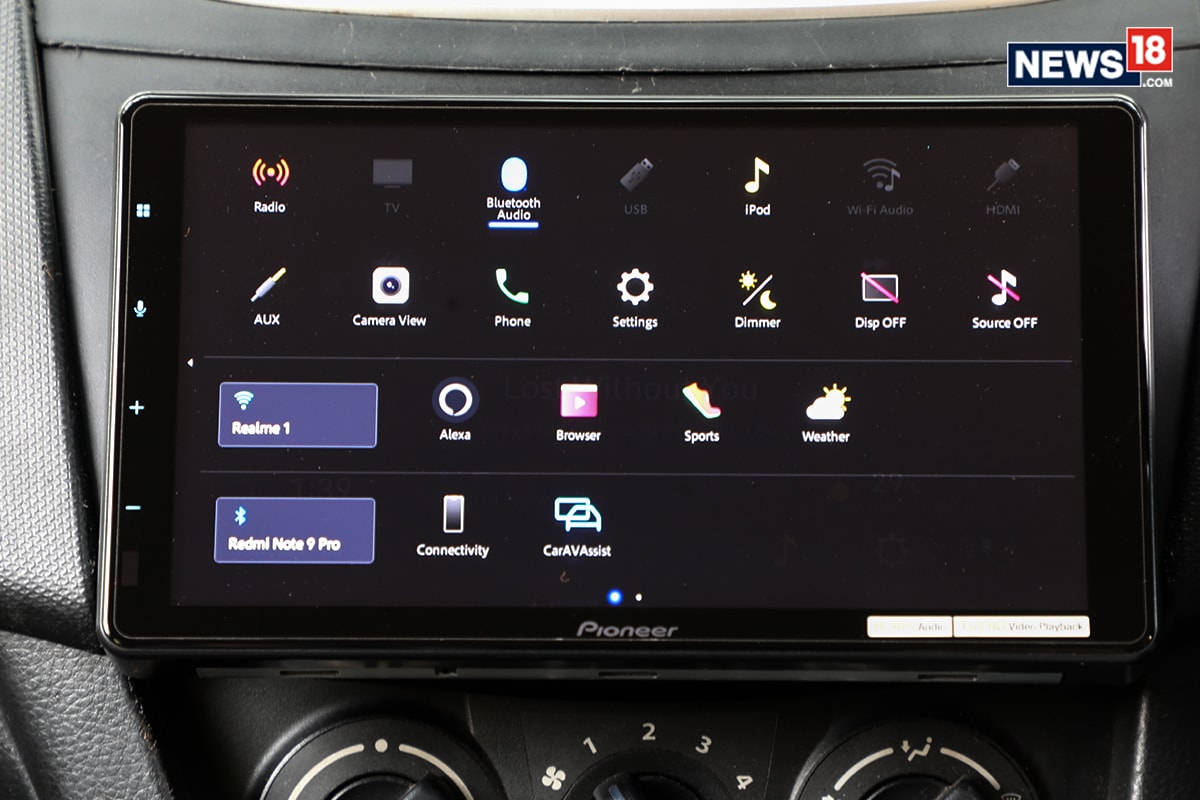 You see, Pioneer has developed its in-house UI for this system which basically works like a smartphone as well. You can access several features and different screens by swiping left, right, or down on the screen and the system has its own set of unique features like tracking the progress of your favourite sports team and it even has its own internet browser.

This means, the DMH-ZS9350BT basically gives you access to the entire internet and lets you do anything you want, be it reading e-mails, watching the news and yes, even stream YouTube or any other website that you want to. While it is not safe to watch videos while on the move, it did allow me to use the system to play hour-long mixes on YouTube in the car by simply visiting the website and leaving it full-screen – something that saves me from buying a YouTube premium membership. 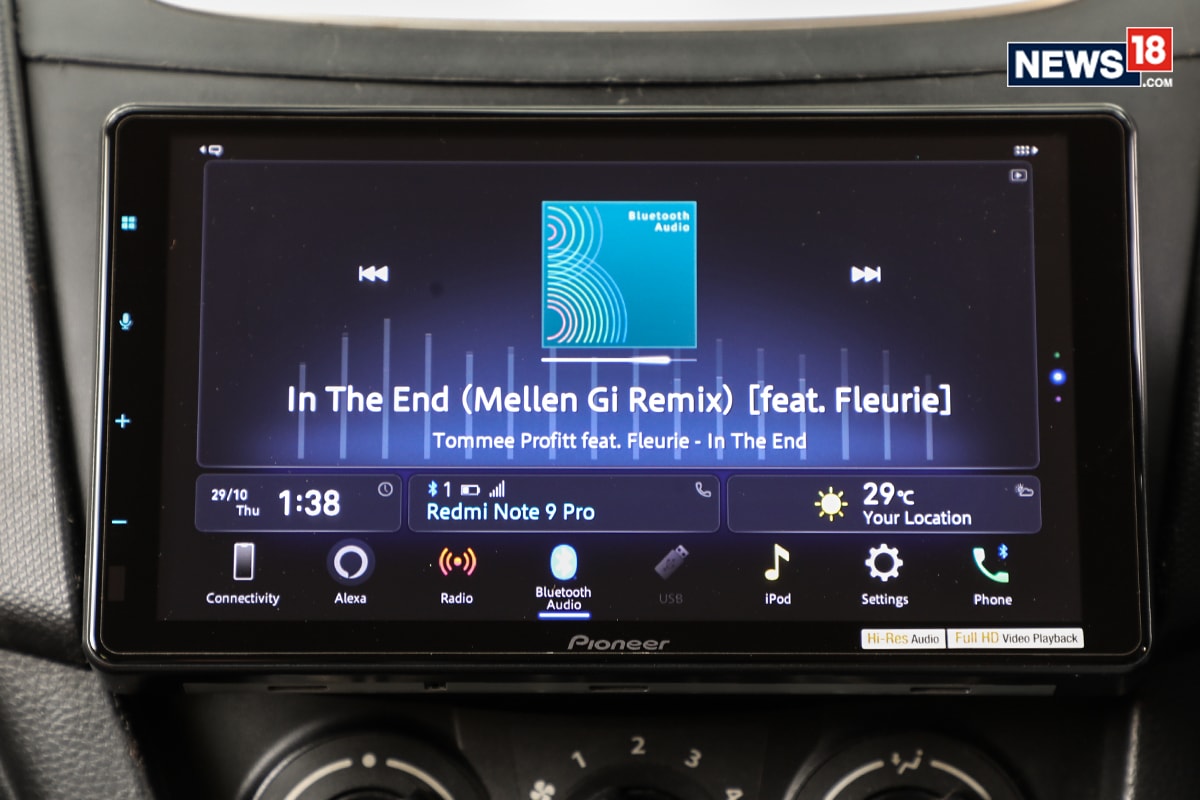 The Pioneer also lets you put on custom wallpapers and rearrange the home screen as per your liking as you can select which icons you want on the home screen, how big you want them and in which part of the screen you would like them to have and this lets you have a very personal experience.

And this is not even all the features that the system has. It includes things like HDMI-input support, USB 3.0 quick charge, rear-view camera input with park assist guidelines, 13 band graphic EQ, time alignment, hi-res audio playback from USB and more.

You get the idea, Pioneer has pulled out all the stops with the DMH-ZS9350BT.

So much so, that Pioneer also went to the extent of creating a dedicated app for the DMH-ZS9350BT which is called as the CarAVAssist and this is available on both Android as well as iOS.

This app mirrors the infotainment system and lets you control all the features mentioned above through your smartphone as well. This, again, opens up a host of ways through which you can use the system and the things can do. It can be used a very highly functional remote for those who want to operate the system from the rear seats or even, you can bookmark links through the app which are stored on the infotainment system and can then be accessed whenever required. You can also customize the entire layout, wallpaper, icon size etc through your phone and the system will even connect to your smartphone through hotspot to get Internet connectivity. Yes, the DMH-ZS9350BT has WiFi and it can create a hotspot connection of its own if needed as well.

Lastly, the app lets you check for updates from the server and this means, your infotainment system will update overtime to fix bugs, roll out new features or simply have UI optimisations to become faster over time. The panel itself is an LED unit that measures 9-inch diagonally and has great visibility, colours and clarity. It’s very similar to an experience that you get from a flagship smartphone.

The only nitpicking that I could possibly do with this system is that the UI got a bit laggy sometimes and the touch response became too slow which ruins the entire seamless experience that the DMH-ZS9350BT offers otherwise. But then again, this can be fixed through an OTA update by Pioneer.

So at the end of the day, the Pioneer DMH-ZS9350BT is one of the most complete infotainment systems that you can buy. This system came to me for testing fitted in an older generation Maruti Suzuki Swift and offered the infotainment experience of luxury cars that many, many times more. I know this because I test all kinds of cars spanning a wide range of price tags and subsequently, experience all kinds of factory-fitted infotainment systems. The presence of wireless Android Auto and Apple CarPlay along with Alexa integration and web browser support means there will never be a situation where you would want more from the DMH-ZS9350BT.

But coming to its price tag of Rs 79,990, you would really want to want the absolute best infotainment experience because let’s face it, this is expensive. Additionally, as more and more companies are already offering Android Auto and Apple CarPlay in their cars which can be used through a wire, and the fact that a Bluetooth-enabled infotainment system also lets you access your smartphone functions including Siri, Google Assistant and Alexa, the DMH-ZS9350BT is definitely a niche product.

However, if you don’t mind spending this amount of money and the only thing that matters to you is having the best experience, then it doesn’t get better than the Pioneer DMH-ZS9350BT.