Despite being priced less than other models, is the Macan as sporty and luxurious as rest of the Porsche cars. Here's our road test review.

Nobody, in their wildest dreams could have thought of Porsche, the iconic sportscar maker to diversify their product lineup with SUVs. However, the massive success of Cayenne pushed Porsche to bring out yet another SUV, called Macan, which happens to be the most accessible product in Porsche's lineup globally. Launched back in 2014, and last updated in 2019 the Macan is turning out to be an equal success like the Cayenne and its price and size has a lot to do with it. While the Porsche Macan is priced at just Rs 69.98 Lakh starting price (Ex-showroom), the thing to see here is if the new Macan is as sporty and luxurious as rest of the Porsche cars. Here's our road test review.

Porsche Macan is a five-seater luxury SUV that gets a very dynamic look, especially in certain colour options like the Red one we drove. The Macan has a very tasteful design with signature elements screaming Porsche all around. Upfront is the typical Porsche long hood with integrated teardrop headlights. The grille gets gloss black treatment and the squarish fog light unit has certain chrome touch.

The side gets a sloping roof line meeting the rear just like a coupé, and the company calls it the Porsche Flyline and gets off your attention from the height of the Macan. There’s also a small roof mounted spoiler to add to sporty touch. The rear gets new taillight strip with four-point brake lights. The five spoke alloy design felt a little average to me. Move inside the cabin of the Macan and you see a typical Porsche cabin with buttons and switches all over. The centre console now gets a bigger 10.9-inch touchscreen infotainment system. The rest of the cabin is essentially the same as previous model. The AC vents are placed below the system quite close to the central tunnel where all the buttons to alter mechanicals of the Macan are located along with the gear lever.

One good thing is that the instrument console is fully analog with three ring layout for driving enthusiasts. The thumb roller on multi-functional steering wheel is not of my liking but I love the rotary knobs on the main console. Above the infotainment system is a stopwatch with an analogue and digital display. In terms of practicality, the cabin space, specifically at the rear is strictly ok for the vehicle of this size. There are not many places you can keep your stuff apart from couple of cup holders in the front. Even the rear AC unit is not digital and a large floor hump means seating 5 full adults will be a task. The boot is deep and wide but due to sloping roof, loses out on the height.

Porsche Macan is being offered with two engine options - a 2.0-litre turbo petrol producing 252 bhp and a 3.0-litre V6 in the Macan S generating 354 bhp. It can reach from 0-100 kmph in just 5.1 sec. The 2.0-litre unit we drove does 0-100 in 6.5 seconds. While the Macan is available with a Turbo variant elsewhere, in India, there are two variants as of now, the regular Macan and the Macan S. Since we drove the 2.0-litre turbocharged 4-cylinder engine with a 7-speed dual-clutch transmission along with an all-wheel drive setup, we will talk about this engine setup. The petrol engine has 370 Nm of torque output and combined with exhaust note in the S+ mode, which you can chose from the rotary knob on the steering, it gives a thrilling driving experience. The charm of seating high like a SUV and yet getting performance of a sportscar adds to the fun.

The Macan also gets active all-wheel drive system called Porsche Traction Management (PTM), and that elevates the handling. Ergonomics in the Macan are top notch and you feel in the control of the car even while touch three digit speeds. While the car is a bit heavy, the steering makes it feel agile. The suspension is kept on the stiffer side to add bring out the driving dynamics. However, Porsche Active Suspension Management continuously adjusts damping force on individual wheels to increase the ride quality. 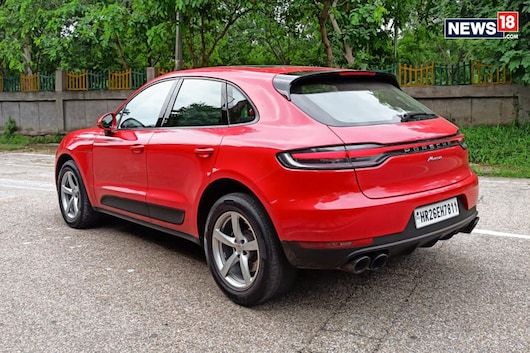 The Macan is a true Porsche in every possible sense. It's luxurious, it's good looking and it's fun-to-drive. Are there any shortcomings? Well, yes there are a few. 1) It feels dated in a day and age of modern luxury cars and 2) The price is bit high when compared to other products falling in the same bracket. But then, buying a Macan means owning the super aspirational Porsche brand and in my opinion that negates everything else.