We recently drove the Renault Triber to understand if it can change the MPV segment in India with its modularity and pricing factors.

Renault first gave us a preview of their newest car – Triber - a couple of months ago at the global unveiling of the product. We initially thought it to be a classic textbook example of a tailor-made car for India. Then Renault announced the price tag a month ago and the definition for the affordable MPVs changed. But is it any good to drive or for that matter, any good to put your money on? We dig a bit deeper.

While Renault is not calling the Triber an MPV, the fact of the matter is that the car will compete in the MPV segment. And one thing that MPVs are not famous about is the way they are designed. The Triber tries to drift away from the traditional MPV design of being a stretched boxy machine to a sub-4-meter Kwid inspired MPV with an SUV touch. There's a lot of chrome treatment, and elements like body cladding, large wheel arches, roof rails, and skid plates add to the rugged look. Overall the Triber is not a very attractive car but looks proportionate and beefy. The Triber has a very unique cabin unlike any of the cars in India which is bit cluttered but adds to the purpose. There's dual-tone theme throughout the cabin with interesting use of fabric on doors. At the centre of the dashboard is an 8-inch touchscreen infotainment system that's basic but effective. You also get an ECO score to understand driving style. There's a bit of lag in using the touch but you will get used to it. The toggle switches are a good touch. The instrument cluster is however what keeps you glued. It has a very nicely designed layout which is easy to read. Now the whole idea behind the Triber was to accommodate as many people in a small car and in a unique way. The end result is India’s first modular car, which essentially means there’s removable third-row seats that are the first-in-India. You can either remove them to liberate a massive 625-litre of boot space or add to seat 7 people inside. However, the operation to remove and fix third-row seats is not that simple, but then, you won't be doing it on a daily basis.

While the boot space is enormous without third row, it's negligible with the additional row. Getting in and out of the third row is also easier than we anticipated, but the legroom is just enough for small distance travel. Although kids and dogs would fit perfectly fine. The second row is in a league of its own with both sliding and reclining seats. Both the second and third rows get their individual AC vents, though the position rear of the second-row vents on pillars is bit odd. 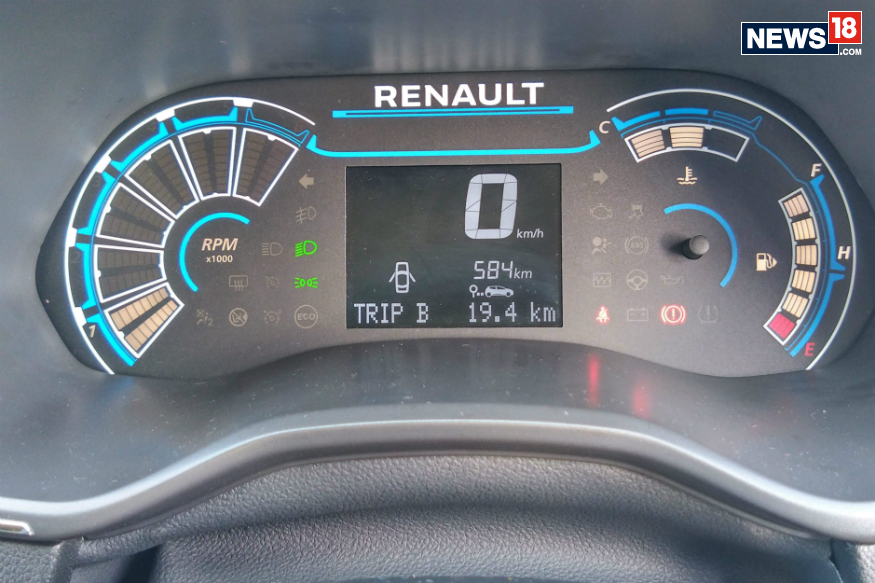 That being said, the practicality is the USP of Triber and credit goes to Renault for adding intricate details to enhance the space. You get dual glovebox, air-cooled box for that can hold a small bottle or two cans of coke, two mobile holders and other small little places. What we don't like in the cabin is the built quality, which could have been better but considering the price you are paying, makes upto it. There are no steering mounted buttons and no display for AC knobs. The Renault Triber only gets a petrol engine which is a 3-cylinder BS-VI ready 1.0-litre motor producing 72 PS of power and 96 Nm of torque. There is a 5-speed manual gearbox on offer. Now to address the elephant in the room, the Triber feels severely underpowered to drive. We tested the car in Goa with 4-full grown adults and the AC on. It was very hard to push the car through its paces and only in the city did the car felt driveable enough.

Steering is on a lighter side and like engine, is tuned to have easy cruise in the city landscape. Brakes are not confidence-inducing, but the ride quality is good with comfortable seats and soft suspension. The NVH levels are decent enough and any push to acceleration might test your patience. Having said that, Triber was never projected as a driver's car. And to make it value for money, Renault had to compromise on the engine performance. But what they have not compromised on is the safety as the Triber gets 4-airbags, ABS with EBD, rear parking sensor camera among others.

The Renault Triber is high on practicality, offers a unique modular cabin and is value for money with prices starting as low as Rs 4.95 lakh. It will be interesting to see if the Triber can reignite the same magic as Kwid and Duster did for Renault in the past. For now, we are impressed with the overall package and the fact that Renault did not bring just another international car to India but has paid a lot of thought on an India-specific car.