Revolt RV 400 First Ride Review: The Electric Future, But Not Yet

India has got its first production electric motorcycle in the form of the Revolt RV 400 which makes a lot of promises. But how many of those are delivered? We find out.

The future is upon and it is going to be electric and etcetera, etcetera. We all know that the future is electric and you don’t need me to tell you that again. And with so much happening and so many people having so much to say about electric vehicles, there is one company that frankly, not a lot of people knew about until fairly recently. It’s called Revolt Intellicorp and their first product is the RV 400 which is an all-electric motorcycle. It’s got a lot of attention around it and is India’s first production electric motorcycle. It makes a lot of promises but is it a promising product to invest in right now? Well, we got a chance to swing a leg over it and find out.

The first thing that you will notice is the design of the motorcycle and in that department, RV 400 does a great job. The area where you usually expect to see an engine is covered up which gives the motorcycle quite a lot of bulk in terms of appearance, and that combined with the sim headlight gives it a bit of a street fighter look. Adding to that is the high-rising, well, fuel tank area which we will get to in a bit and the sharply rising tail makes it look sporty. Amongst the two, it is the red-colour option that really stands out and has nice graphics on the shroud that fades to black. Interestingly, the name of the motorcycle is placed down below which is a nice touch. The 7-spoke alloy wheels are blacked out and are contrasted by the huge belt drive sprocket that has a brushed metal finish and makes for a nice contrast that looks especially good when you see the motorcycle in motion. Look closer and you’ll notice the Revolt logo and lettering on the headlamp unit itself which has a nice and sporty layout and houses the LED headlamps. The LED treatment goes on to the back as well with sharp-looking LED tail lights which are placed under the well-sized grab rail that pillion riders will surely appreciate. Speaking of which, the seat height of the RV 400 is a bit on the higher side at 814mm but you also get good ground clearance. Suspension duties are handled by an upside-down 37mm front fork and there is a monoshock at the back which can be adjusted for preload. To give you a perspective for the size of the RV 400, keep in mind that it’s about the size of a regular 125cc motorcycle. 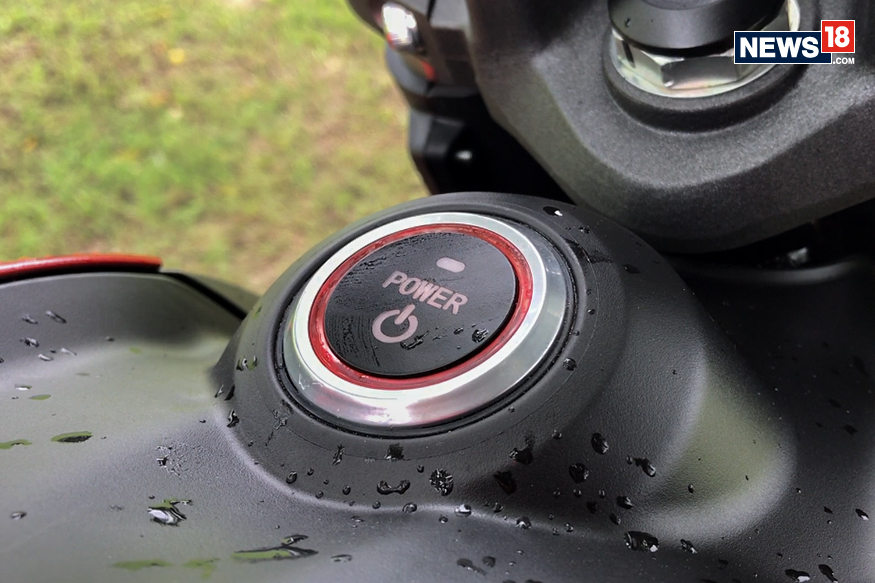 Now that’s the usual bits. Let’s come to what’s different thanks to it being all-electric. The first thing that you notice the moment you turn the motorcycle on with the push-start button (thanks to keyless ignition), is the instrument cluster. Here, instead of a fuel gauge, you are shown the battery percentage and instead of a tachometer, you are shown the ‘Ampere’. How cool is that? The instrument cluster of the Revolt RV 400. (Photo: News18.com)

There’s more clever engineering too as the footpegs can be swapped with each other to have a more relaxed riding position which is absolutely genius. But now let’s talk about the riding bit. The only real way to actually know if the RV 400 is switched on and will move forward if you twist the throttle - is by the small indicator on the dash saying ‘Ready’ because well, there is no sound. But of course, a unique feature of the RV is that it offers the choice of having a sound. Not one, but actually four which can be turned on or off with the press of a button. But here’s the thing about this feature. In real life, the sound isn’t actually all that loud. And since there are no gears on the motorcycle and since all these sounds are of a much bigger motorcycle, the whole audio experience just ends up sounding way too fake. It’s a personal choice, really, but as for me, I ended up turning it off altogether. In short, the soundtracks feel gimmicky but surprisingly, I actually liked the electric motor whine. It’s unique and sounds properly futuristic. Let’s talk about the riding experience. The first thing you need to know is that there is a little bit of a learning curve involved with RV 400. There is no gear lever, no foot brake lever and no clutch either. What it gets is a combined braking system, like you see in scooters, while being a motorcycle. So it takes a bit to get used to. Also, the brakes on it feel woody and lack bite and feedback and no, it’s not due to the weight of the motorcycle as surprisingly, Revolt has done a great job by keeping it low. As for the ride quality, we rode the motorcycle at a small go-kart track which in no way is an indication of how the bike will perform on city roads so we will reserve our impressions for our full road test. 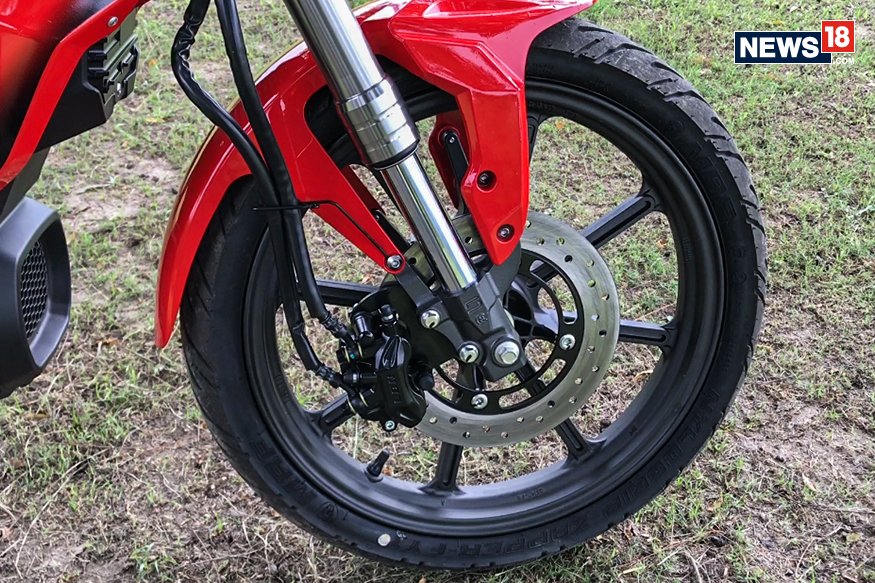 We were not too happy with the braking performance of the Revolt RV 400. (Photo: News18.com)

What the small go-kart track did tell us is that the motorcycle is nimble thanks to the good leverage from the handlebar which means zipping through city traffic should be alright with the RV 400. The riding ergonomics too are relaxed and very commuter-like.

Then there are three riding modes on offer which alter the throttle sensitivity which has a jerky on-off transition and could have used a bit more refinement. Once you are past the initial throttle movement, the motor feels refined and progressive.

Now coming to the range, the company claims a range of 160 km on a single charge but that is only in the slowest Mode 1, which limits the motorcycle to a max speed of just 45 km/h. This is not exactly fast enough for city traffic and makes the motorcycle way too dull, which might mean that this won’t perhaps be the mode in which it is ridden the most. Mode 3 is the sportiest one which offers a top speed of 85 km/h but then that limits the maximum range to about 85 km on a full charge, and it is here that the throttle feels snatchy as well.

So it is mode 2 which finds a sweet spot between the two and the one in which you would ride it the most. The battery takes four hours to charge from 0-100 per cent from a regular 15-ampere socket. And this brings us to the charging process.

Now, there are four ways to charge this motorcycle. You can directly charge it by plugging it into a socket. Then there are three more ways to charge it but they have their own issues too, the biggest one being the weight of the battery which is a massive 18 kilos, and that’s just too heavy. What this means is that while you can take out the battery to charge it by itself, carrying an 18-kilo battery anywhere is going to be a hassle. Also, the battery needs to be pulled out vertically and that makes the process even more complicated and difficult. You can swap the battery at a swapping station but we will have to wait and see how many of those pop up near you. Lastly, you can order a fully charged battery to wherever you want using a phone app but then again, you will have to pull out an 18-kilo battery for it. And of course, there is going to be some cost involved in ordering a battery or swapping it at a station, and at the time of riding this, we are yet to know what that will be. And given the range and the mode where the bike actually feels nice to ride, chances are that users will have to charge it almost every time before heading off anywhere and I am not sure how many people would be up for that.

So at the end of the day, the Revolt RV 400 is a bit of a mixed bag of emotions. As an idea, and to an extent as a product, it is definitely exciting. And it’s almost unbelievable how much Revolt Motors has managed to pull off in such a short time. Coming out with a motorcycle as opposed to an electric scooter will definitely help it establish its own identity and stand apart from the crowd and honestly, it deserves every bit of the excitement around it as well. But given the whole battery and the charging infrastructure situation, I’m not entirely sure if it is a blind recommendation for people, at least not as of now.