Rivian intends to begin selling its R1T, the pickup it will debut in Los Angeles, in the fall of 2020.

Rivian Automotive plans to debut its all-electric pickup truck at the Los Angeles auto show on Monday, and its founder and chief executive exudes optimism about his desire to do for the U.S. auto industry's most lucrative segment what Tesla did for luxury cars.

Not everyone is so sanguine.

R.J. Scaringe, Rivian's 35-year-old CEO, said he and his financial backers believe that demand for electric pickups is "massively underserved."

Rivian intends to begin selling its R1T, the pickup it will debut in Los Angeles, in the fall of 2020.

But while Workhorse is aiming to sell its pickup to utilities and municipalities for use on limited routes, Rivian said its pickup is aimed at consumers. Rivian's truck will have a range of up to about 400 miles, which would be the longest among its three different battery packs.

Scaringe sees the U.S. pickup market, which accounts for the bulk of global profits for the Detroit Three automakers, as ripe for change.

Rivian has not disclosed prices for its truck, but Scaringe said it will start at just under $70,000 before federal tax credits for the entry-level model. A stripped-down version with the most powerful battery pack will sell for less than $90,000. Current large, luxury pickup trucks can sell at that price or higher. 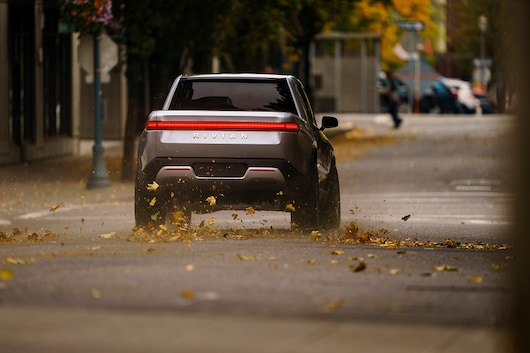 The R1T, the all-electric pickup by Rivian, an American electric-car company. (Image: Reuters)

SOME DOUBTS ABOUT DEMAND

Many auto industry officials and analysts are skeptical that electric pickups can sell in large numbers unless battery technology vastly improves in driving range and cost.

Buzz about electric pickups vastly outweighs their near-term significance to the U.S. market, because making a pickup electric can compromise other key attributes of such vehicles, such as load-hauling capability.

Rivian's truck will offer a payload of 1,760 pounds and a towing capacity of 11,000 pounds - attributes more comparable to the Detroit Three's mid-sized trucks than to best-selling large trucks such as the Ford F-150 or GMC Sierra. That will put Rivian's truck in a tough place as it lacks the power and payload of the larger models, but will cost more than the mid-sized trucks.

The Detroit Three automakers have not jumped into the market for electric pickups. Tesla's CEO, Elon Musk, told investors in August that an electric pickup is "probably my personal favorite for the next product" from the company, though he has spoken only in general about a potential launch, saying that it would happen "right after" Tesla's Model Y, which the company has targeted to start production in 2020.

Ford Motor Co has promised a hybrid F-150 pickup by 2020 and hinted at a fully electric model some day. General Motors Co's CEO, Mary Barra, has said the U.S. automaker has given a "tiny bit" of thought to developing all-electric pickups.

Fiat Chrysler Automobiles NV has a hybrid electric-gasoline version of its Ram pickup. Japan's Toyota Motor Corp said it hopes to make electric options on all models available by 2025.

For the most part, the U.S. pickup market leaders are doubling down on petroleum-fueled models such as Fiat Chrysler's new Jeep Gladiator mid-sized pickup that will be officially unveiled in Los Angeles. The Gladiator is aimed at consumers who want a "lifestyle" truck that has car-like amenities in the cab, and can haul recreational "toys" such as jet-skis, campers or dirt bikes.

Rivian, which last year bought the former Mitsubishi plant in Normal, Illinois, for $16 million to build its truck, will also likely face financial challenges and the need to raise more money as it moves into production, if Tesla's experience is any guide. Tesla has raised billions of dollars in financing -- including secondary share offerings and bond sales -- as it has struggled to ramp up production.

Like the new Jeep Gladiator, Rivian is targeting recreational customers.

Autotrader analyst Michelle Krebs said those types of customers tend to prefer the mid-sized trucks like the Toyota Tacoma and Chevrolet Colorado, but they are much less brand loyal than owners of the full-sized trucks.

But Scaringe said that Rivian sees an advantage in its truck's foundation, a "skateboard" that packages the vehicle drive units, battery pack, suspension system, brakes and cooling system all below wheel height to allow for more storage space and greater stability due to a lower center of gravity.

The skateboard could be used for other models including an SUV. Scaringe said Rivian's goal is to reach about 50,000 sales a year by 2025. Rivian also plans to sell the skateboard to other automakers, he said.

And Scaringe said Rivian has another business strategy: Most of its revenue will not come from selling vehicles, but eventually selling experiences like renting vehicles for a weekend trip.