We mapped the performance of the Royal Enfield Himalayan upon its daily use. (Image: News18.com/ Siddharth Safaya)

We decided to test the Royal Enfield Himalayan extensively. How did the bike fair? Let’s find out.

Royal Enfield has garnered a reputed name in the industry with its bulky, sturdy and powerful motorcycles. In 2016, it tried its hand on a completely different forte than the one in which it has expertise, by launching the Himalayan.

We decided to test the Royal Enfield Himalayan extensively. How did the bike fair? Let’s find out.

At first look, the bike looked simplistic with a dedicated design and looked like the athletic cousin of Royal Enfield Bullet and Classic. The tall stance, high placed handlebars and upright sitting position were appreciated as soon as the bike was put in motion. We rode the bike for almost 3 hours at one stretch across Delhi-NCR. The ride was never uncomfortable or tiring owing to the riding posture that the bike offers.

We did not have to shift lanes or even slow down the bike while crossing over a rough patch on the road, while the other vehicles started shifting to other lanes to avoid it. It felt good to save up on travel time owing to such brilliant mechanics of the machine.

We tested the bike for its USPs on an off-road track. The up-angled silencer and the belly pan proved their worth as the bike easily crossed over obstacles with a minimal scraping of the base.

The Himalayan was never bothered by the speed breakers on the road and its suspension – the rear one being placed right under the rider’s seat, ensured a smooth ride on very rough patches.

In terms of handling, The Himalayan had a surprisingly small turning radius and stability. This helped a lot in Delhi’s traffic as lane shifting could be done efficiently.

The Royal Enfield Himalayan delivered an impressive mileage of 30 km/l in the city. This was further increased on highways at a constant speed and low RPM. We were able to map a trip across Noida, Faridabad and Gurgaon, a total of 120 kilometres and the bike used just 4 litres of fuel.

The 15-litre fuel tank of the motorcycle seemed to be more than sufficient for commuting within the city.

The Hazard Lights in the Himalayan came in pretty handy every now and then while stopping the bike roadside and considering that this is the first time Royal Enfield has featured it, it is an appreciable addition to the product.

Interestingly, the fuel gauge reading on our review unit wasn’t very confidence inspiring as after showing us the fuel level at half, it rapidly dropped down to almost empty. The compass on the console wasn’t easy to figure out and left us wondering how to use it. Apart from this, the console was neat and helpful as it showed the time and other trip related information. 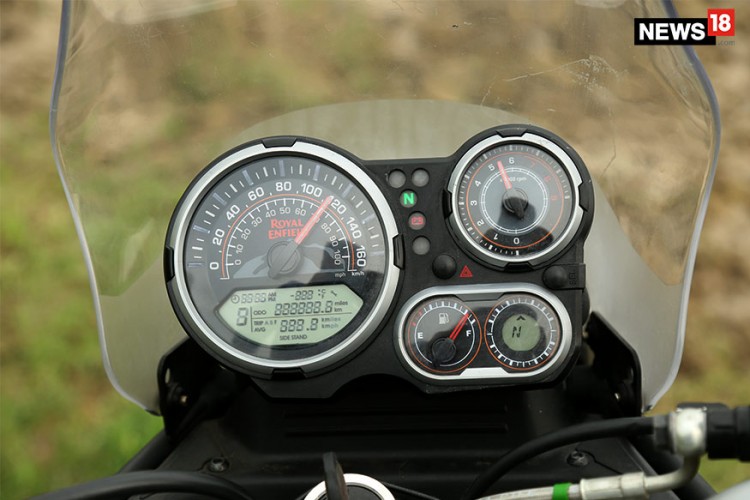 Royal Enfield had introduced a new engine with the Himalayan - the LS 410. The engine is very responsive and delivered performance in a very controlled manner, especially without any vibrations.

On the highway, though, it never did well against vehicles running at triple digit speeds, making overtakes very difficult. The 24.5 bhp felt a bit short for such situations.

The braking system on the Himalayan left us wanting a bit more. The brakes had a delayed response but they did their work well. There were times though when we missed the ABS and it only made us wonder why RE has not incorporated it in the bike.

The 5-speed gearbox did not work efficiently, as the gear shifting was next to impossible at times, especially when it was shifted from the first gear to the second.

The harshness also extended to the clutch lever as it felt a bit heavy to operate and at times became really annoying, especially when stuck in traffic. At the end, it all comes down to one question. Is the Royal Enfield Himalayan good enough a motorcycle for daily commute? In our experience with the bike, we did face a few issues but overall, it gets a thumbs up from our end!

To put it in short – our opinion is based on the comfort, ease of use, the confidence delivered and its ‘take it anywhere’ capability.

Also read: Royal Enfield Himalayan Review: A Bike That Can Do It All, in a Budget