The new Thunderbird 500X can be differentiated from the regular Thunderbird and other horde of cruiser motorcycles in India by its new bright color scheme. The Rest of the bike gets an all-black paint, right from the alloys to the engine, fenders, exhaust pipe and the whole body frame. This gives the Thunderbird 500X a more universal appeal, which before now, was related to only male riders (to some extent). 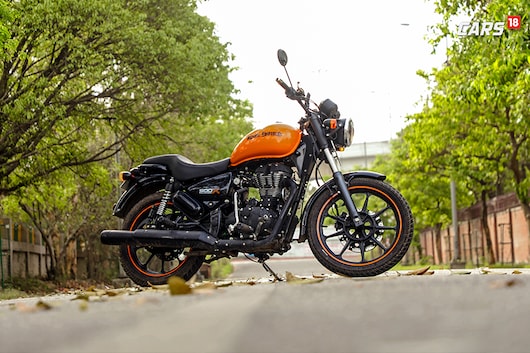 This is also the first time Royal Enfield has added tubeless tyres to the Thunderbird range. The headlight lens now gets a darker surround that differentiates between the projector light and DRL. The other notable changes include new handlebars, a new one-piece seat, and elimination of the back rest. The instrument cluster is a two pod unit, both of them circular.

The new ape-hanger handlebar are functional and do make a difference in the riding style. While the regular thunderbird has a hanging style handlebar meant for a relaxed cruiser inspired position, the X gets more aggressive position, allowing allow better maneuverability in traffic, and you now lean slightly forward while riding, making you feel in control of the bike. The new seat as usual, is a comfortable place to rest your body on while riding for long distances. The Royal Enfield Thunderbird 500X is still powered by the identical 499cc engine as on the regular Thunderbird. This means that the new Thunderbird X continues to get 27.2hp and 41.3Nm of torque and is mated to the same five-speed gearbox. The 500 cc motor behaves like a typical Royal Enfield motorcycle is not that fun to accelerate.

While the tuning of these machines is done in a way that you feel relaxed, with a laid back kind of characteristic, synonymous with cruising, it requires a punch at times, which is hard to get by in this Thunderbird 500X. Also, Royal Enfield has improved a lot on the NVH levels and the new age machines are much more refined. However, there’s still a scope for improvement and one needs time to adjust to a Royal Enfield bike when moving from any other brand. The quality of the switches is the same – average to be precise and can be improved a bit. The seats now get only the grab-rails that have been neatly tucked under the pillion seat. However, it creates a sense of insecurity for the pillion while revving hard. Mileage too, is a concern here and you don’t expect much output from the 500X.

Royal Enfield has a strong and loyal fan base, who may or may not like this new color scheme. But they don’t have to worry about these new colors as the Thunderbird 500X still has the same fun filled riding experience provided by the 500cc motor underneath this funky colour scheme. But for all those who love cruiser motorcycles that stand out of the crowd, the Thunderbird X does fulfill your needs in style. And priced for Rs 1.98 Lakh (ex-showroom, Delhi), it’s just Rs 8000 expensive than the regular Thunderbird, but has a lot more charisma and charm.