The Enyaq iV comes as Skoda’s first offering that is based on the MEB platform that is tailored just for electric vehicles.

After an exhaustive number of teasers and sketches, Skoda has finally dropped the wraps on its first-ever all-electric SUV. The Enyaq iV, as the company calls it, is essentially a sibling of the Volkswagen ID.4. The car comes as Skoda’s first offering that is based on the MEB platform that is tailored just for electric vehicles. After the Citigo iV, the company now aims to leverage the crossover boom and enter the segment with an alternate powertrain.

While we did get a glimpse of the car with the inane number of teaser images and sketches, a feature that we did not expect was the illuminated grille. The 130-LED lights come as standard on the performance RS version and the limited-run Founders Edition. The idea comes from the 2019 Vision iV concept that preceded the production model.

Diving into its powertrains, the Enyaq RS iV is effectively the most powerful production Skoda ever with duel electric motors that offer a combined output of 302hp and 460Nm of torque. It breaches a ton in 6.2 seconds and goes on to record a top speed of 180kmph. Skoda was diligent in covering all areas to provide a generous range. The sleek shape of the SUV translates to a low drag coefficient of 0.27 while the low rolling resistance tyres help with the efficiency. The car has an optional heat pump for the AC that cuts down the energy used by the battery. 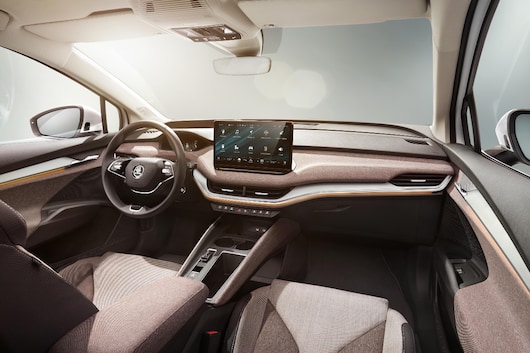 Recharging the biggest battery from zilch to 80 percent takes up to 38 minutes with fast charging capabilities of up to 125kW. Using an AC wall box, the same duty will be done in six to eight hours depending on the battery’s size.

But keep the impressive output and range aside, and the car is still pure bliss to look at. The car will come with a set of 18-inchers as standard. However, higher in the variant ladder, one can also go for a set of 21-inch wheels. To signify the company’s inception 125 years ago, Skoda will make just 1,895 units of the Founders Edition. On the inside, the Enyaq iV is eerily similar to the latest Octavia or Scala, apart from the new 13-inch touchscreen infotainment system. The Enyaq is also the first Skoda to boast a head-up display with augmented reality tech and also the first to support remote-controlled parking.

The company is already accepting preorders for the Enyaq iV in all trim levels. However, deliveries of the Founders Edition won’t commence until later 2021.